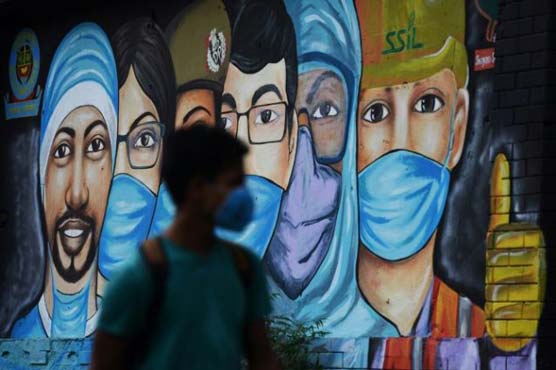 BRUSSELS (AFP) – EU leaders met face to face Friday to try to rescue Europe’s economy from the ravages of the coronavirus pandemic, as India became the third country to record one million cases, joining Brazil and the United States.

The virus has now killed more than 585,000 people and infected over 13,600,000 as it continues to surge across the globe despite months of unprecedented measures aiming to stop its spread.

The pandemic has also shattered economies worldwide, and the mood was sombre as European Union leaders met in person for the first time in five months hoping to overcome divisions about a planned 750-billion-euro ($855 billion) stimulus package.

French President Emmanuel Macron described it as a “moment of truth”.

“It’s our European project which is in play here,” Macron warned before meeting Dutch Prime Minister Mark Rutte, who leads a group of northern European countries holding out against handing cash to southern nations without strict conditions.

I have to keep fighting

Elsewhere COVID-19 is spreading at an ominous pace, with India surpassing one million infections just a day after Brazil’s number topped two million.

And the United States, which has recorded more cases than both countries combined with over 3,560,000, on Thursday posted yet another record number of new infections in one day with 68,428.

More than 600 people are dying daily in India, where lockdowns have been reimposed on millions of people.

India’s main hotspots had previously been the megacities of Mumbai and New Delhi, but smaller cities and rural areas — where 70 percent of Indians live — have recently begun to raise the alarm.

The coastal tourist region of Goa is the latest Indian state to go under lockdown, imposing a three-day shutdown and a nightime curfew until August 10.

With per capita spending on health care among the lowest in the world, India’s hospitals are reeling.

“The fear of catching the infection is very real as I am in a high-risk zone almost round the clock,” Showkat Nazir Wani, a doctor working at an intensive care unit at Sharda Hospital just outside the capital New Delhi, told AFP.

“It’s not going to go away till a vaccine comes… I have to keep fighting and trying to save every single life.”

After two studies this week raised hopes for a potential vaccine, the United States, Britain and Canada accused Russian-linked hackers of targeting labs in their countries conducting coronavirus vaccine research.

The three governments pointed the finger at the Kremlin, saying that the hacking group involved was “almost certainly” linked to Russian intelligence.

Moscow rejected the accusations as “groundless”.

In the US, the state of Florida has become the country’s new epicentre as well as a key battleground in a partisan-tinged national fight over reopening schools.

The Republican governor’s demand mirrors that of President Donald Trump, who has threatened to cut federal funding for schools that refuse to open their doors.

Authorities in many countries have been reimposing lockdowns in the hopes of heading off a second wave of the virus.

On Thursday Israel imposed weekend restrictions, while Spain’s Barcelona urged residents to stay home due to rising infections in the hard-hit country.

Asia, which was largely more successful in suppressing the first wave than many areas of Europe and the Americas, has started recording fresh outbreaks.

In China — where COVID-19 first emerged late last year — flights were curtailed and public transport shut down in Urumqi, the capital of the far-western Xinjiang region, after new infections were detected.

Bars and schools have been closed in Hong Kong as infections in the densely populated city started to climb, although the number of new cases — in the dozens — is still far lower than other parts of the world.

A record 293 cases were also reported in Tokyo on Friday.

In Melbourne, Australia’s second-biggest city, a second wave continues to worsen despite the reimposition of a lockdown. After a daily record of 423 new cases were confirmed on Friday, authorities warned tougher restrictions could be to come.