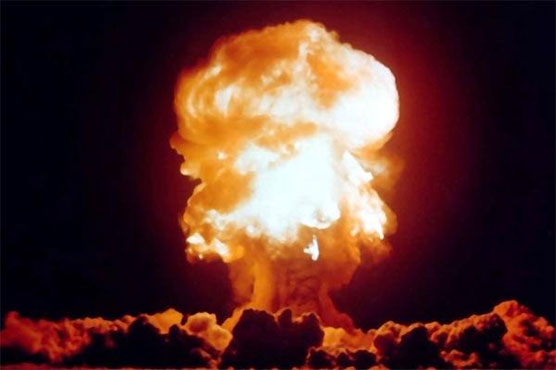 WASHINGTON (AFP) – Top US scientists called on President Donald Trump- Thursday to not resume nuclear weapons tests, saying such tests would heighten the risk of a nuclear war.

In a letter published on the 75th anniversary of the world s first atom bomb test in 1945, about 70 scientists, including a half-dozen Nobel Prize recipients, questioned the Trump administration s possible plan to end a 28-year moratorium on tests.

Doing so “could increase the danger of another nuclear arms race as well as an inadvertent or intentional nuclear war,” they said in the letter published in the journal Science.

“Following in the long tradition of scientists opposing nuclear weapons due to their harmful effects on both humanity and the planet, we ask the US government to desist from plans to conduct nuclear tests,” they said.

The Washington Post reported in late May that the Trump administration had discussed the possibility of undertaking a nuclear weapons test to send a warning to Russia and China, both nuclear powers.

There was no agreement on doing so, but the report sparked concerns in the community committed to arms and nuclear weapons control.

The letter in Science noted that during the post-World War II Cold War with Russia, the United States undertook 1,030 nuclear bomb tests, more than all the tests combined by the world s other nuclear powers.

Washington imposed on itself a moratorium on tests in 1992 and in 1996 signed the Comprehensive Test Ban Treaty.

But the United States has yet to formally ratify the treaty, even as it has adhered to and promoted its goals.

“Restarting US nuclear weapons tests of any size, underground or above ground, would give license to other countries, such as North Korea, India, and Pakistan, to resume testing,” the scientists wrote.

They warned that underground tests can spread dangerous radioactivity into water supplies, while atmospheric tests — currently banned by a 1963 treaty — could spread radiation quickly and widely.

The group urged the administration to ratify the Comprehensive Test Ban Treaty and called for the Senate to adopt a proposed law to prevent any funding to go to nuclear tests.

The White House has not confirmed the discussion to resume nuclear weapons tests.

In a statement Thursday to mark the July 16, 1945 first “Trinity” atomic bomb test in New Mexico, Trump said US nuclear weapons power has been a crucial deterrent to threats to the country s security, and that he was investing to modernize and revitalize the US nuclear shield.

However, he said, “True to our word, we maintain our moratorium,” on tests, even though Russia has conducted weapons experiments “that produce nuclear yield,” and despite concerns that China has done so as well.