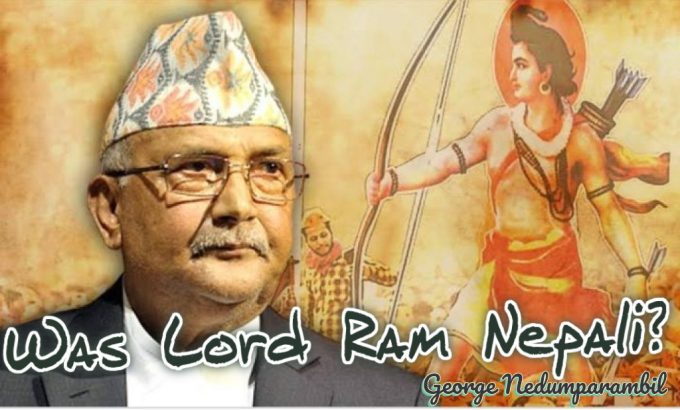 Iron must be hit when it is red hot to have the intented effect! In the same way reaction to articles published in CCV will have the maximum effect, only when it is reacted by readers immediately.

Here is a case in point. We (CCV) published the article on ‘Ram in Nepal’ on July 13th and on the very following day George reacated and wrote this letter to Editor. He also wrote a second letter on the jailed raper priest’s request for marriage. He was setting an excellent example for other readers.

Similar is the example of our columnist Pamplanil. If their examples are imitated by all our readers, then the CCV will become very educative and extremely entertaining.

Internet Spoilsport
Who is not to be imitated? It is the editor himself! The day I got Georg’s letter, my internet connetion went off and so may laptop plyed truent. Couldn’t even reply to George. Just now July 19th night internet has come back. So, ‘sorry to George’ for delay on my part.

Now read George and see how he clinches his arguments entertaingly and imaginatively. He has all the traits need for a novel writer, exposing the stupid ways religious imagination can work and lead simple folks astray. This is the art of correcting people by laughing at them (Ridendo corrigere!) which is one of the main functions of good journalism.

Religion, mythology or Facts?
There is no use trying to prove the truth, when the person is question is mythological. Socrates, Budha and Jesus were historical, in the case of Rama, Sita and Krishna, we may even offend peiople if we say they are not historical unless we follow the fanciful path followed by George.

So just imiate George and Pamplani, the front runners in Reader reactrion. Thank you for continuing to educatae us entertainingly.
Every one of you can do it, if there is bit of a will. Try to prove the other guy wrong or try to provide a better answer to a pestering issue. james kottoor, editor ccv.

DearEditor,
This refers to the report in CCV about PM Oli of Nepal claiming Nepali domicile for Lord Ram and that the temple at Ayodhya is a fake one. Good Lord, this is going to set off another round of crossfire of unfriendly exchange of words between two neighbors, both predominantly Hindu.

While India and Nepal spar on copyright over Lord Rama, I as a citizen of India a free-thinker, would like to ask a few questions to my Nepali and Indian Hindu brothers. I apologise in advance if anyone’s sentiment is going to be hurt. Hurting someone’s sentiment is least of my intention but rather to ignite free thinking among believers in the hope they will dare to ask questions rather than being blinded by beliefs.

Present day Nepal and India are mere political boundaries and hence I believe that when referring to Hindu gods, one is talking of gods domiciled in Indian subcontinent, all the way from Afghanistan to Myanmar and Sri Lanka down south. I am wondering why Lord Ram or for that matter Lord Siva or Lord Krishna did anything to preserve the sub-continent in the form it was when these gods made their appearance or legends about them evolved.

Indian subcontinent was torn apart over a period of time giving it the present shape comprised of several independent countries, all the events happening under the watchful eyes of these gods. When these gods made their appearance the combined population of the subcontinent would have been perhaps a 10th or even less of the present population size and the world a much less complicated place.

When the population were at such low levels these gods got compelled to make their appearance. I am troubled by the thought that these gods just disappeared at a time when their blessings were most needed in spite of people building many temples in honour of them all over the subcontinent.

But none of these gods, all of whom claim their domicile as India. intervened to preserve and prevent the present shape from getting evolved. For the most part the region was ruled by many kings with each one having sway over some part of the subcontinent. Then came the Islamic invasion. The marauding invaders overthrew many kings and went to establish Islamic rule that lasted 700 years. During this time many temples were reported to have been destroyed and replaced with Mosques, including Ram temple at Ayodhya.

There was not a single Muslim or Christian in the subcontinent when these gods made their appearances. Didn’t these gods look the other way when India was raped, so to say, wholesale by the invaders. The rule by Muslim rulers ended and replaced by that of Western powers. With them the missionaries arrived although Christianity had reached Kerala even before that. In present day India, 18% of the population are Muslims and 2.5% Christians.

There are always problems in the name religion which these gods could have foreseen and helped nip it in the bud. Hindu gods are not alone in this sort of strange behaviour. Predominantly Christian Europe fought two world wars. Before these wars, there were religious wars between Christians and Muslims. Gods did not intervene and the collateral damage, unimaginable at that, was left to be absorbed by those surviving these mayhems.

My question to Mr. Oli and other Hindu brothers is, “Didn’t your gods let you down? Didn’t they do anything to stop the Islamic aggressors and colonists from West? Did your gods do anything to stop when the Islamic rulers went on a conversion spree, including forced ones, and built mosques over temples? Mercifully the Europeans didn’t have any need to demolish temples to build churches though one hears some claims to the contrary. The Indian subcontinent which is regarded as the land of Hindu gods were reshaped wholesale by the invaders, all these things happened under the watchful eyes of non-intervening gods. Why did they not move a finger to stop it by coming down? The incarnated Lord Rama and Lord Krishna had got themselves involved in wars in order to defeat evil and ensure victory to the good. Lord Krishna, for example, had taken part in the battle between Pandavas and Kauravas.

He restricted himself to being an advisor to Arjun who represented ‘good’ who defeated the other party regarded as ‘evil’. The belief is that incarnations and coming down to earth of gods was to reduce Mother earth’s burden (source the net). I would like to ask Mr. Oli and other Hindu brothers, is the burden of Mother earth less or more these days than that prevailed many thousands years ago?

There is only one answer to this, it is now and the burden has been accumulating since the time invading foreigners arrived. A culture that existed from times immemorial got corrupted by invaders so much so obtaining peaceful co-existence has become the biggest challenge for the present generation and the government that they elect.

Interpretation factories representing the faith industry may have many explanations for the fate that befell on India. As a freethinker I can only say that perhaps the gods don’t give a damn to the houses of worship built by man and many prayers going on there.

Mr. Oli, you are now fighting over Ram temple. You should instead be asking whether your gods care. You should be asking where these gods were, when their land went under the barbaric rulers who unleashed a reign of terror lasting several hundred years. If there is a God, it appears to me that god is indifferent to man made religions and the divisions among humans that they created .