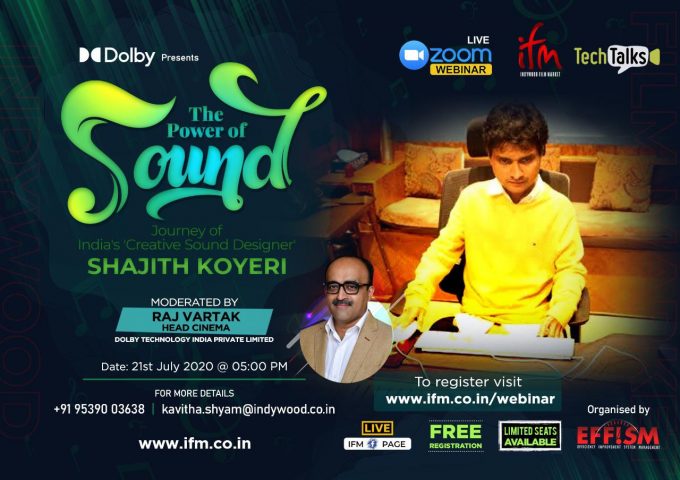 Indywood Film Market has been scheduling online sessions of TechTalks to keep film industry live even during lockdown. Previous sessions being very successful, IFM has organised for the next session of IFM TechTalks on 21st July 2020 at 5:00 PM (IST), which will be presented by Dolby. This session will be hosted by Mr. Raj Vartak, Head Cinema – Sales, Dolby Technology Pvt Ltd. and will be featuring the most Creative Sound Designer of Indian Film Industry – Shajith Koyeri.

A pioneer in a Sync sound technique, Shajith Koyeri is a national award-winning creative Sound Designer. His first independent work was with the movie, Perfect Husband in 2003, which was a turning point in his career. Known in the industry for his perfectionism. He has worked for more than 75 films in total, winning the National and Filmfare Awards for Omkara, Filmfare award for Talwar, 7 Filmfare award nominations, the Star Screen Award for Kaminey and IIFA award for Barfi & Haider. Some of his remarkable works include The Blue Umbrella, Omkara, Kaminey, Beyond the clouds, Talvaar, Dangal, Bala, Chicchore, Stree, Sui Dhaga, Panga,the Hollywood movie – DAM999 and many more.

Do register for being an active part of film industry even during this lockdown period. Registrations are open in the following link: https://ifm.co.in/webinar.