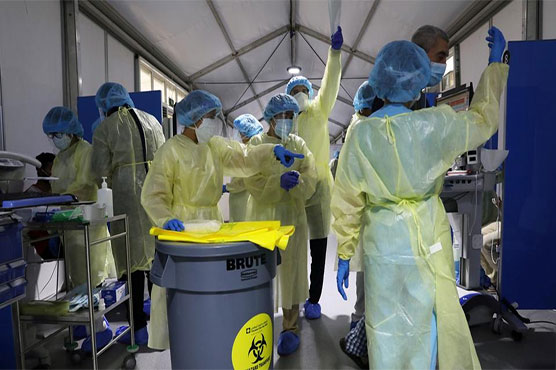 MONTEVIDEO (AFP) – More than four million coronavirus cases have been recorded in Latin America and the Caribbean, half of them in Brazil, according to an AFP tally based on official figures.

Brazil alone has registered 2.2 million cases and 82,771 deaths, the second-biggest outbreak in the world after the United States.

Although many Latin American countries have begun relaxing stay-at-home measures, the virus is still spreading quickly across much of the region.

Peru, Mexico and Chile are also on the list of the top 10 countries by total cases, with well over 300,000 each.

Mexico s death toll has surged to become the fourth-highest in the world, at 40,400.

The country surpassed Italy on Sunday, and now has more victims than anywhere but the United States, Brazil and Britain.

Worldwide, the virus has infected more than 15 million people and killed nearly 625,000 since it emerged in China late last year.

Brazil in particular has struggled to set a strategy for responding to the pandemic.

The far-right leader, who has regularly hit the streets mask-less for rallies by his supporters, has been in quarantine at the presidential palace since July 7 after contracting the virus himself.

His office announced Wednesday he had again tested positive, saying he would continue his quarantine and suspend his upcoming travel plans.

Bolsonaro, 65, argues the economic fallout from stay-at-home measures could be worse than the virus itself, and is instead pushing the unproven malaria drugs chloroquine and hydroxychloroquine as remedies, following in the footsteps of US President Donald Trump.

“This politicization of the drug by the US and Brazilian presidents for murky reasons has no justification, and it deceives people,” she told AFP.

“It has been proven this drug has no effect against COVID-19.”

Bolsonaro is on his third health minister since the pandemic reached Brazil five months ago, after falling out with two doctors who previously held the post over their recommendations on containing the virus.

The current minister, an interim, is Eduardo Pazuello, an army general with no prior medical experience.

The World Health Organization voiced optimism last week that the outbreak in Brazil had finally reached a plateau, urging the country to use the opportunity to “take control.”

But though the level of daily infections and deaths has stabilized, it remains high.

The country has recorded an average of more than 37,000 infections and 1,050 deaths a day over the past week.