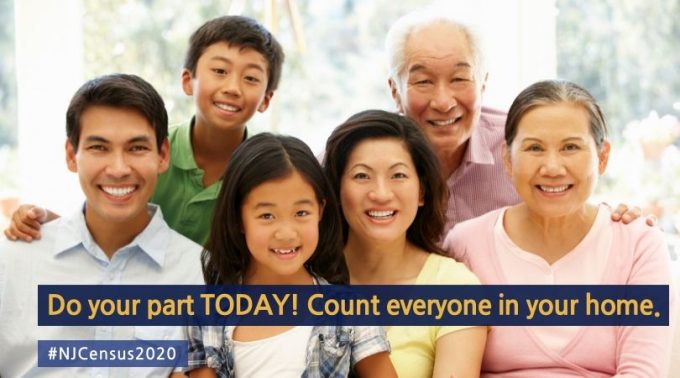 Do your part and count everyone. Photo Credit: New Jersey Census 2020

(Eastern Bergen County, New Jersey: July 23, 2020) —All households and communities need to be counted now in the 2020 Census.  The League of Women Voters of Northern Valley reminds residents the opportunity to respond to the Census only occurs once every ten years.  The information gathered impacts each municipality’s federal funding, political representation, and economic development.

Beginning on August 11, Census enumerators begin visiting households that did not complete the Census.  In advance of the enumerators’ visits, the League of Women Voters of Northern Valley joins the Census Bureau to promote “Census Push Week” from July 27 to August 2.  With shelter in place restrictions being eased, people are encouraged to hold socially distanced, masked activities.  Some examples of activities to undertake include tabling at outdoor community events; establishing a Census Kiosk at food distribution locations; being present at COVID-19 testing locations, places of worship, or libraries; distributing Census flyers; and organizing a car caravan or chalk-a-thon in hard to count communities.

For people who do not want to attend public events, ample virtual engagement options also exist.  Examples of this include hosting a virtual block party, conducting outreach to personal contact lists asking friends and family if they have had the chance to fill it out, and utilizing Mobile Questionnaire Assistants using Census Bureau employees, who help people complete their Census form at community events.

The Census is easy to complete by telephone, online, or by mail, and it is also safe and secure.  Responses to the Census are protected by federal law and cannot be shared with other law enforcement agencies.  Complete the 2020 Census online, https://my2020census.gov/.  For further information about the 2020 Census, call 800-923-8282.

The League of Women Voters of Northern Valley also encourages eligible New Jerseyans to register to vote.  The COVID-19 pandemic has limited the ability to register people to vote in-person, and there has been a drop in voter registration as a result.  Visit the League of Women Voters of New Jersey at www.lwvnj.org to obtain a voter registration form or to contact them to request one be mailed to your home.

Community members interested in partnering or participating on Census or voter registration events may contact the League of Women Voters of Northern Valley at lwvno.valley@gmail.com.

For more information about the League of Women Voters of Northern Valley, contact lwvno.valley@gmail.com.  Learn more about the chapter on its webpage, lwvbergen.org/about-us-more/northern-valley-information/.  Updates are posted on Facebook, www.facebook.com/LeagueofWomenVotersNorthernValley/, and Twitter at twitter.com/LeagueNValley.