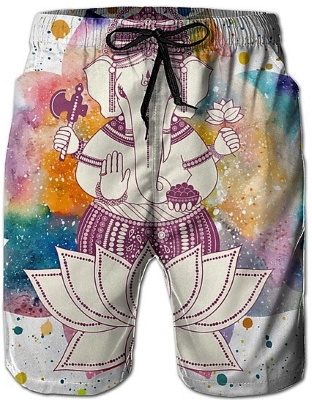 Distinguished Hindu statesman Rajan Zed, in a statement in Nevada today, said that Lord Ganesha was highly revered in Hinduism and was meant to be worshipped in temples or home shrines and not to adorn one’s thighs, groin, genitals and pelvis for mercantile greed. Inappropriate usage of Hindu deities or concepts or symbols or icons for commercial or other agenda was not okay as it hurt the devotees.

Wish and its parent ContextLogic Inc. should not be in the business of religious appropriation, sacrilege, and ridiculing entire communities. It was deeply trivializing of immensely venerated Hindu deity Lord Ganesha to be displayed on shorts/swim-trunks, Rajan Zed emphasized.

Hinduism was the oldest and third largest religion of the world with about 1.1 billion adherents and a rich philosophical thought and it should not be taken frivolously. Symbols of any faith, larger or smaller, should not be mishandled; Zed noted.

Objectionable Ganesha Mens Shorts/Swim-Trunks at Wish were described as “stylish” and “breathable”.

“One of the leading mobile commerce platforms in North America and Europe”; Wish, founded 2011 and valued at over $8 billion; claims “lowest prices on earth”. It claims to sell over three-million products per day; including fashion, shoes, electronics, kitchen gadgets, home decor, sports gear, etc.  Besides Wish, ContextLogic Inc. also owns other online marketplaces; including Geek, Mama, Home, and Cute.