Stop being a Church of Constantine!: A Church That Is Poor?; Money, Sectarianism, & Catholic Tradition 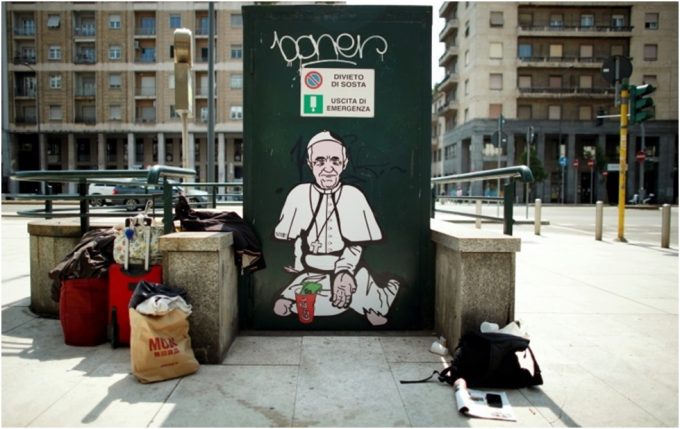 A mural depicting Pope Francis as a homeless man asking for charity is seen in Milan May 23, 2020. (CNS photo/Alessandro Garofalo, Reuters)

Suddenly I got an emailed article from “Common Weal” this mornig. I had lost touch with it for long, but they haven’t. My thanks to them.

“A poor Church for the poor” is the pet topic of Pope Franci, mine as well and of the prolific theological French writer Yves CONGAR, who is also quoted in the article below. Congar was one of the writers who was one of the main resource persons I read for my theological Doctorate in Rome.

Peacoking Bishops!
Just for a taste, he wrote comparing Bishops today in their shining royal finery to “Brdes on their wedding day”, ‘Peacoking’ to borrow a phrase from Francis! This and much more food for thought, you can find below.

Sinc POLITICS is all about public good the Church cannot and should not withdraw from public square without ofcourse, getting in party politics, even as Jesus called HEROD, that FOX and high priests of his time, hypocrites, white washed sepulchers. Francis does this when he tells US president, he cannot be a builder of bridges and a Christian, at the same time. This is the message the article sends out.

Damed Disgrace!
It is very doubtful if bishops like NY cardinal and his like who campaign for an American Pope or fancy to become the next pope get this message! But some of the laity in US are definitely getting it as some one has flatly rubbished the Cardinal’s conduct as “Damed Disgrace” as reported by NCR. There are such bishops all over the world.

So please read, not just what the Common Weal article writes, but more importantly what the article tries to convey in between lines. Pope Francis does it constantly in words and deeds as the pictorial portrayal above wividly depicts. That was the main purpose for which saintly Pope John xxiii opened the Vatican II:

To stop being a Church of Constantine!
“To sweep clean the dust of the empire accumulated on the throne of Peter ever since the time of Constantine!” Send in your critical views please. james kottoor, editor ccv.

What to make of the fact that the Catholic Church received $1.4 billion from the U.S. government’s Paycheck Protection Program? The remarks from Oklahoma City Archbishop Paul S. Coakley, chairman of the USCCB’s Committee on Domestic Justice and Human Development, seem to suffice.

As he put it in a statement, the “Catholic Church” in this case encompasses the hundreds of individual Catholic dioceses, parishes, schools, social-service agencies, and other organizations that collectively employ thousands of people, and so is not prohibited from receiving taxpayer-backed federal aid. “The Paycheck Protection Program was designed to protect the jobs of Americans from all walks of life, regardless of whether they work for for-profit or non-profit employers, faith-based or secular,” his statement read in part. A range of Catholic media outlets have made the same observation, and it seems clear there is less to this “story” than meets the eye.

Yet at the same time, we should remain mindful about the constitutional and political issues concerning the relationship between Church and state, and the continued need for financial accountability and transparency in light of the links between the sexual-abuse crisis and financial mismanagement in Catholic institutions. It seems that some of the objection to PPP(pay-check-protection) funding for the Church arises from the belief that the money could be used to pay settlements and legal costs associated with sex-abuse cases and other scandals. And this unfortunately speaks to the level of regard many people have for the Catholic Church today.

But we might also use the moment to think about the larger ecclesiological and theological issues raised by the increasingly decisive role of money in the life of the Church, especially the U.S. Catholic Church. As a result of changes in Catholic political culture since the twentieth century, wealthy donors have acquired the kind of legitimacy that the institutional Church might have once conferred on emperors, kings, and princes—as evidenced now in the expanding influence of conservative and traditionalist Catholic groups and Catholic business leaders.

But this development itself arises in part from four decades of hostility to government spending and the dismantling of federal social-service programs, which has raised the pressure on Catholic organizations to provide more of these services than at any time since those programs were implemented in the twentieth century. The donations the Catholic Church gets from these private entities don’t necessarily come out of sympathy or support for the work it’s doing in these areas; rather, the contributions can sometimes be meant to influence the Church’s position on issues like immigration, the environment, and the economy. But in the case of the PPP payouts, we are talking about taxpayer money. And this should make us think about the complex meaning of “poor Church” in the recent Catholic tradition, and what that idea means going forward.

Contemporary Catholic teaching on this matter begins with Vatican II. The documents of the council were somewhat ambivalent on the subject of the relationship between the Church and the political, social, and economic status quo, as well as state support (financial and otherwise) for the Catholic Church. The ambivalence was a reflection of differing sensibilities evident at Vatican II—illustrated, for example, by the “Catacombs’ Pact of the Poor and Servant Church” on the one hand, and the more capitalist-friendly position of European and North American bishops.

The libertarian ideology of small government is incompatible with the Catholic social tradition.

French Dominican Yves Congar, probably the most influential theologian at the council, helped shape a new understanding of the “poor Church” with his 1963 book, For a Servant and Poor Church (republished in several languages since the election of Pope Francis).

Congar described the essential vocation of the Church as service to a neighbor, in direct connection with a love for poverty. He referred to the contrast seen through history between a Church destined to be poor, like Christ, and one that through its representatives manifests outwardly as rich.

But his was not a materialistic concept: Congar understood the idea of poverty in the Church as Christological (the only wealth of the Church is Christ) and ecclesiological (the poor are a sacrament of our encounter with God). Congar never really addressed what it means in the literal financial sense to be a “poor Church.” Rather, Church-and-poverty was to be understood in a universal sense: all members of the Church are the poor.

The unresolved tension between “rich Church” and “Church for the poor” is evident in the conciliar constitution Lumen Gentium, paragraph eight:

“Just as Christ carried out the work of redemption in poverty and persecution, so the Church is called to follow the same route that it might communicate the fruits of salvation to men. Christ Jesus, ‘though He was by nature God…emptied Himself, taking the nature of a slave,’ and ‘being rich, became poor’ for our sakes. Thus, the Church, although it needs human resources to carry out its mission, is not set up to seek earthly glory, but to proclaim, even by its own example, humility and self-sacrifice.”

The Church needs to follow Christ in poverty and persecution, but it also needs human resources to carry out its mission. The “both and” that is typical of Catholicism helps in articulating how the idea of “poor Church” can be understood.

As interpretations of Vatican II changed during the pontificates of John Paul II and Benedict XVI, there was less emphasis on the idea of the poor Church, paralleling Vatican disavowals of liberation theology that had begun in the early 1980s.

But suddenly, in 2013, the election of Pope Francis helped bring back the idea of a poor Church. The name the new pope took was itself an indication of this. “Oh, how I would like a poor Church, and for the poor,” he said a few days after his election, confirming he would resume the interrupted discourse of Vatican II. Francis’s relationship with liberation theology might be complicated, but he clearly speaks a different language than his predecessors on the idea of a poor Church.

And yet he also shows some ambivalence. There is, for instance, his recent appointment of Mario Draghi to the Pontifical Academy of Social Sciences. Draghi earned his doctorate at the Massachusetts Institute of Technology and was president of the European Central Bank from 2011 to 2019. His appointment signals the non-ideological pragmatism Francis sometimes embraces, even on the issue of the modern economy. Though his teaching on the capitalist system can be summed in his statement “this economy kills,” he also believes in the necessity of compromise on social and political issues.

It may be hard to believe in the possibility of compromise in today’s polarized ecclesial culture, but compromise is of course a significant feature of the Catholic tradition. Even at the magisterial level, there is compromise—even about the concept of money, which cannot be addressed definitively and infallibly once and for all. That’s how it is in a global Catholic Church, where very different historical, political, and social situations are at play. And yet, there are some post-Vatican II dilemmas to deal with.

In many countries, including the United States, the Catholic Church is not only an important advocate for the voiceless, but also literally a lifeline. What are the costs for the poor of having a poor Church? Though the Church cannot afford to be politicized, it retains the right and duty to be political, as is necessary for its prophetic mission. To be prophetic means renouncing the privileges granted through concordats or other unwritten clauses and edicts. But a radical withdrawal from the public square would mean losing the platform to speak in favor and on behalf of those excluded from or suffering under the economic system.

Ultimately, this comes down to intellectual and ecclesial contradictions in the theological and political culture of Catholics. The libertarian ideology of small government is incompatible with the Catholic social tradition. But neither does the Catholic social tradition support the ideology of a small Church that renounces help in the form of taxpayer money for its work for the common good. A sectarian turn in the Catholic understanding of the relations between Church and government would be paid, as usual, by the people who can least afford it.

Massimo Faggioli is professor of theology and religious studies at Villanova University. His most recent book is The Liminal Papacy of Pope Francis: Moving Toward Global Catholicity (Orbis Books). He is a contributing writer for Commonweal. Follow him on Twitter @MassimoFaggioli