They will say Ram is a national symbol, a symbol of Hindu pride. But did Ram consent to being converted to something as banal and nasty as the symbol of an ethnic nationalism? Ayodhya’s Ram temple is a monument to exclusion, a brute majoritarianism subordinating others.

The main article published below is one by Pratap Bhanu Mehta in the Indian express, which is more than self evident. Instead of CCV editor commenting on it I give below few quotes on “Bhoomi Pujan” from other Indian secular writers:

Sitaram Yechury
CPI-M general secretary Sitaram Yechury wrote temple foundation July 5th: “This ‘bhumi pujan’ function is a naked exploitation of people’s religious sentiments for partisan, political purposes and brazenly violates the letter and spirit of the Indian Constitution. Constitution guarantees and our law protects the choice of faith of each citizen. The government must protect the choice of all citizens. State has no religion.”

He also tweeted: “It is also a violation of the Supreme Court verdict that directed the temple construction to be undertaken by a Trust.This ‘bhumi pujan’ provided retrospective legitimization for the destruction of the Babri Masjid. The SC verdict described this as an “egregious violation of law” and called for punishment of those who committed this act.The construction has begun before any such punishment,”

Owaisi Hyderabad MP
Asaduddin Owaisi Hyderabad MP said on Bhoomi Pujan: “By attending the Bhoomi Pujan, Prime Minister Narendra Modi has violated his constitutional oath and the tenet of secularism. His attendance is the victory of Hindutva and he has laid the foundation of Hindu Rashtra today.”

“You (Modi) should understand that India’s symbol cannot be a mosque or temple. It can be representative of a religion but never of a country. By saying that the temple will be a symbol of the country, he is endorsing majoritarianism.”

Bhoomi Pujan
Just one more quote: “Narendra Modi was the cynosure of all eyes at the Ram Mandir bhoomi pujan ceremony.(See photo below) For Gandiji,Sarvodaya (equal and full development of all), or Poorna Swaraj (complete independence for all) or Ram Raj (The Kingdom of Heaven).” 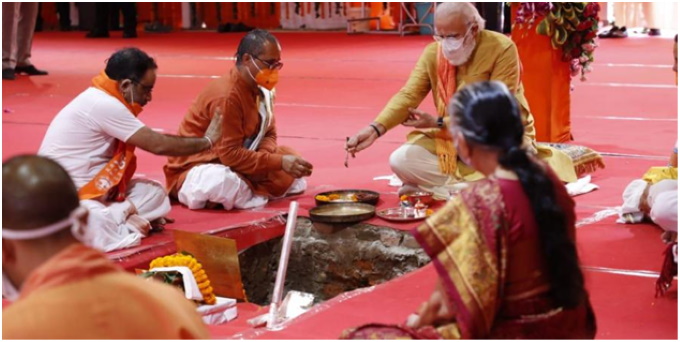 Ram. You can be properly addressed just with that name. Any proclamation announcing your triumph, like Jai Shree Ram, diminishes you. The necessity of proclaiming your victory implies you could have been defeated. I must also make a confession. You were the radiant and intimate presence in my life: The ground of our Being. You were the Mind and the Senses. You were the Virtues.

You were Compassion and Divination. Your name was uttered in the anguish of suffering and the ecstasy of liberation. You were the householder, the son, the brother, the disciple, the friend. You were the king, but also the renouncer. You were Dharma. You were occasionally cruel and unjust. But your anguish seems to recognise your own cruelty. You were divine. But your equivocations were human. You were the last Refuge I woke to, and slept to, the reassurance Tulsi gave us: “Raghuvar tumko meri laaj, sada sada main sharan tehari, tum ho garib nawaz (I seek protection in you, protector of destitute souls)”.

But I know I will not find you there. This is because what is being consecrated is a monument to a violent, collective narcissism. You know a temple to you is dangerous or superfluous. Superfluous if we understand your true meaning; dangerous if we arrogantly emulate you. Valmiki described you in human form as “nara chandrama” (moon amongst men). Your greatest chronicler could see right through you. He had the moon’s blemishes in mind. You are admittedly an epitome of sacrifice.

You gave up a kingdom, to honour an unjust promise of your father. It is puzzling that our itihasa is about children fulfilling the unjust promises of their father and setting off a chain of destructive events in its wake. In the Ramayana and Mahabharata, there is not a single father, from Shantanu to Dhritarashtra to Arjuna, where the children don’t have to pay for the unjust choices of the father. Yours did too.

Then there is Vali who you slayed like a coward, Shambuka whose penance challenging the caste order you unjustly punished, and Sita whose truth had to be sacrificed to opinion. You could reconcile these blemishes because you were divine. You could sin and still redeem them. “Svargata shambuka samstuta Ram,” as it goes in the beautiful Nama Ramayana (you sent Shambuka to heaven who was apparently grateful to you).

But we mortals cannot worship your morals. We humans have to have a lesser morality, since we cannot redeem those we slay or banish. Vali, and Shambuka and Sita will require justice here, not eternal redemption. So we cannot emulate your maryada (integrity). It was appropriate to you. No wonder your greatest devotees, Madhusudhan Saraswati, Tulsi, Gandhi, never felt they needed a temple to discover their morality.

Perhaps we are consecrating a higher principle. “Shuddha Brahma Paratpara Ram” as the first line of Nama Ramayana goes — the purest Brahmana. But that never needs a temple. The beautiful Shiva-Uma-Rama of the Ramrahasya Upanishad cannot take the form of a singular representation. In consecrating you at Ayodhya, they want to dislodge the different forms in which you reside in our inner citadel, one no invader has been able to breach, and replace it with a new Teflon diety, manufactured by a political machine.

So the temple is dangerous or unnecessary. You know this temple is founded on something akin to an act of terrorism, the razing down of a mosque. You know this temple is not a product of piety, but retaliation and revenge for an event centuries ago. Kings and invaders of years past must have razed many temples to the ground and they likely destroyed a temple at Ayodhya too. But that is neither here nor there. History is a slaughter house that no divinity of any stripe has been able to redeem. All we can do is snatch snippets of a fragile justice here and there. It is the ultimate hubris to think that we need to protect you rather than you to protect us.

Revenge does not help. Past conflicts are being used as pretexts to reconfigure contemporary power. The forces that will consecrate this temple converted your name into the very opposite of what it signifies. They made Ram synonymous with revenge, with an insecure pride, with a blood curdling aggression, violence towards others, a coarsening of culture, and the era sure of every last shred of genuine piety in public devotion and public life.

They will say Ram is a national symbol, a symbol of Hindu pride. But did you consent to being converted to something as banal and nasty as the symbol of an ethnic nationalism? You redeemed your devotees, those you wronged, but your opponents as well. But this temple is a monument to exclusion, a brute majoritarianism subordinating others. Look at the men, both political and spiritual, who speak in your name, and the blood, power and intimidation they have on their hands.

Your name will be used to shore up the coarsest forms of personalised power; the entire liturgy is a display of the most corrupt of monarchical power, in a democratic garb. I understand that so many of my fellow Hindus will experience this as a great catharsis, as the weight of history being lifted. But deep down we need to ask: How did we become so insecure that we need a cowardly victory of razing down a monument to satiate out collective narcissism? And is this a kind of insecurity that is never satiated, it expands its circle until it colonises all sentiment? This temple is the first real colonisation of Hinduism by political power. I feel chained like never before.

You came to earth to lighten its load; this temple burdens us with evil. Like the last genuine devotee of Ram in modern India, Gandhi, we can only mourn in silence, as our garib nawaz forsakes us. Your radiant presence is gone. Only the oppressive yoke of zealotry remains. (This article first appeared in the print edition on August 5, 2020 under the title ‘Ram, I will not find you there’. The writer is contributing editor, The Indian Express)