Kerala’s church: But where has the message gone? 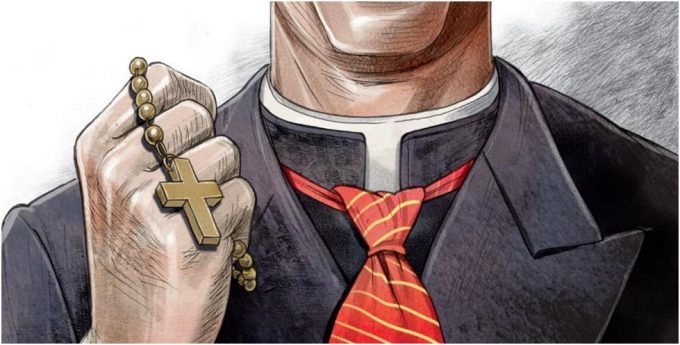 While it is no mean achievement for a Church from an obscure corner of the world to find itself a seat on the Palatine, let us look at the ground realities in Kerala.

This article is published to help readers to recall the historical roots of the Church in India, made up mainly of the Syromalabar (CMC) and Latin(LM) Churches. Of course there are many other churches in India. All the divided churches in India and the world are labeled as: CHURCHIANITIES since all of them are starter by msn!

Not of Jesus!
Christianity itself as an organized religion is a human invention from the time of Constantine. The real roots of Christianity goes back to Jesus the Nazarine/Jew, who never founded any Church or organized religion. Jesus was crucified and his epitaph describing his mission stuck on his cross: INRI (Jesus,Nazarine,King of Jews).

The name Christian itself came to common parlance only many years after crucifixion in Ephesus when his followers made him the anointed of God by chrism. It was done mainly by Saul of Tarsus, a bitter persecutor turned an ardent devotee and preacher(Paul).

Saul became Paul
It happened after he was thrown off his horse back and heard a sound asking: “Saul, Saul why do you persecute me?” Thus Saul became Paul, persecutor became the preacher! The historical origin of Christianity as one of imperial power and splendor, actually started with the advent of Constantine in the 313-ies after the death of Jesus.

It was to retrace the present royal triumphant Church of glory to its original root, a defeated Jesus, a humble servant of servants and the poorest(foot-washing) that Pope John xxiii, started the Vatican ii, which Francis Pappa is trying to implement without any success.

Never forget your roots!
The writer below Paul Zacharia gives a brief but beautiful account of the history of (CM) to the present. It is an exercise in rear-view driving, chewing the cud, Nadu-marannalum Moodu marakkaruthu (never forget one’s roots even if one forgets all else!)

Attil kalangalum alannu kalayanam, Even before we carelessly throw into a flowing river something, we should count and see what we are throwing away. So read carefully and critically what Zacharia writes below.

The message, the pearl of great prize lost or thrown out carelessly into the flowing river by all Churches is Jesus, his words and deeds. Make them your – believer or atheist — your torch light in today’s encircling darkness! james kottoor, editor ccv

Not everyone can win the occupancy of a 1,700 year-old basilica in the heart of Rome, situated upon the Palatine Hill, the first nucleus of the Roman Empire where once the palaces of the great Caesars stood.

Kerala’s Syro-Malabar Church has just done it. Pope Francis has basilica, one of the world’s oldest Christian places of worship, whose construction was started by Emperor Constantine in 325-326 CE and which is one of Palatine’s tourist attractions.

The Syro-Malabar Church and its over-a-dozen fellow Christian Churches are all too familiar to Keralites—they are never away from the news for reasons both right and wrong. For those not in the know: the Syro-Malabar Church (SMC)— a Syrian tradition as different from the Latin (meaning European). along with the Malankara—represents that wing of the Catholic Church (61% of Kerala’s total Christian population) which upholds

The Syrian tradition is linked to the earliest Christian traders from the Persian region who sought out Kerala for its spices circa the 1st to 3rd centuries onwards. (Popular faith holds that it was St. Thomas the apostle who first brought Christianity to Kerala in the 1st century, though it is historically unverified.) The Latin connection came via the Portuguese, following Vasco da Gama’s arrival in Kozhikode in 1498 and the Portuguese colonisation of the western coast. Both Syrian and Latin rites owe allegiance to the Pope.
In other words, the SMC, arguably one of the world’s oldest Christian congregations, is actually older than the hoary basilica assigned to it. The Pope took the step—responding to a request from the Kerala Church—in order to provide the more than 7,000 members of the SMC diaspora in Rome a Malayalam-speaking spiritual hub. In a dog-eat-dog world—religion least excluded from this merciless feast—it is no mean achievement for a Church from an obscure corner of the world to find itself a seat on the Palatine. The SMC has every right to feel good.

But when eyes turn inwards from the grand heights of the Palatine to the ground realities in Kerala, we see in the SMC a giant religious conglomerate mired in tragic moral and spiritual decay and reckless materialism—of course a description that fits the bill of nearly every religious institution today. As a person born into the SMC but who chose to leave it, this writer has been an interested observer of the zigzag journey of the Church during the last several decades. The Church, without doubt, has made significant contributions to the Kerala society, of which the foremost would be the pioneering role it played in the spread of universal education and healthcare in the decades following Independence. In both instances, the Church’s was a modernising initiative.

A spirit of Christian idealism led it. The proselytising urge was in check. In less than a decade after Independence, the wealth, political power and social influence of the Church had leapfrogged. Its formidable network of dedicated clergy, obedient laity and institutions of excellence functioned like a fine-tuned engine in the temperate communal climate of Kerala. The Church’s phenomenal growth was assisted in no small measure by the constitutional provisions of Minority Rights. However, simultaneously, a new force was gathering momentum in Kerala: Communism.

Arguably the Kerala Church’s headlong fall into murky politics and the venality that goes with it began when it picked the Communist party as its chief enemy. Aided by Nairs and Muslims, the Church formulated and led the infamous Vimochana Samaram—Liberation Struggle—in 1958-59 against Kerala’s first Communist government (installed in April 1957). In July 1959, responding to the demand of the ‘liberation struggle’, Prime Minister Jawaharlal Nehru’s government dismissed the government of chief minister E M S Namboodiripad using Article 356. Indira Gandhi was the then Congress President. The Church had tasted political blood.

The corporatisation of the Church, which took place in the following decades, was inescapable considering the extensive diversification of its activities and the huge investments and assets in its control. But that introduced into the psyche of the Church a blatantly utilitarian, even brutal, value-system that certainly suited a world of buying and selling but not of the spirit—especially when your celebrated brand name is that of a young carpenter-turned-preacher by the name Jesus who perhaps didn’t own a second pair of sandals or a change of clothes.

The Western Church’s conversion from the spiritual to the materialistic took place over a thousand years ago when it crowned itself the kingmaker of Europe and its coffers were filled with untold wealth. The Kerala Church, in its own way, was following suit: the same shameful story, of course, of every other spiritual empire of today. What about the sex issues, people ask. There never was a time when sex wasn’t a problem for the Church ever since celibacy became mandatory for the clergy and chastity for the nuns back in the Middle Ages. It isn’t as if the Church’s 2,000-year-old fund of worldly wisdom doesn’t know that both celibacy and chastity are losing games and man will be man and woman, woman, irrespective of the robes they wear.

But the Church continues to take this formidable risk and face the consequences that are often painful because it absolutely cannot do without the cadres of the tens of thousands of dedicated, single-minded, full-time workers—the priests and nuns—who have no other affiliations. They are its backbone. The Kerala Church has its share of scandals but sex is hardly the yardstick to judge its existential crisis, even though that hogs the headlines.

The Kerala Church’s—perhaps of the universal Church’s too—real crisis is one of honesty. It’s a crisis of preaching a message but losing it within oneself. It’s true that living up to the ideals of the young carpenter is hard—perhaps impossible. New times do call for new strategies. Charity begins with money in hand. But where do you draw the line? If profit displaces mercy, what happens to the message of the man on the cross? Isn’t it best then to call oneself Church Inc.? (Paul Zacharia,Award-winning fiction writer(paulzacharia3@gmail.com)