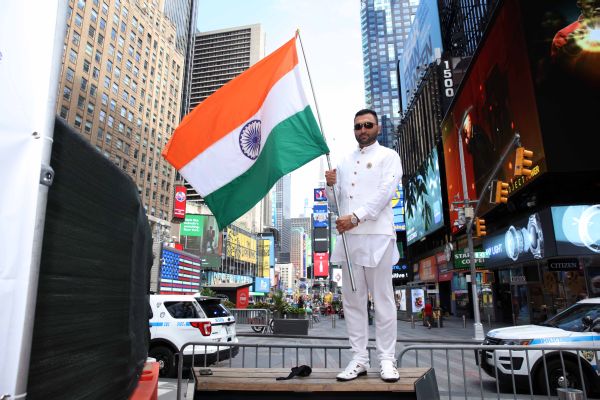 The Federation of Indian Associations (FIA) of the tri-state area of New York, New Jersey and Connecticut (FIA Tristate), created history on August 15, 2020 by unfurling the Indian tricolor for the first time ever at the iconic Times Square in New York City, to commemorate India’s 74th Independence Day. It was the first time that such an event was held at the crossroads of the world.

In his address, Consul General Jaiswal highlighted Hon. Prime Minister Narendra Modi’s Independence Day message, delivered from New Delhi’s majestic Red Fort, where he paved the way forward for India, and our aspirations of building a new India. The celebration of India’s Independence Day in the U.S. is a symbol of the strong relations between the U.S. and India, he said. 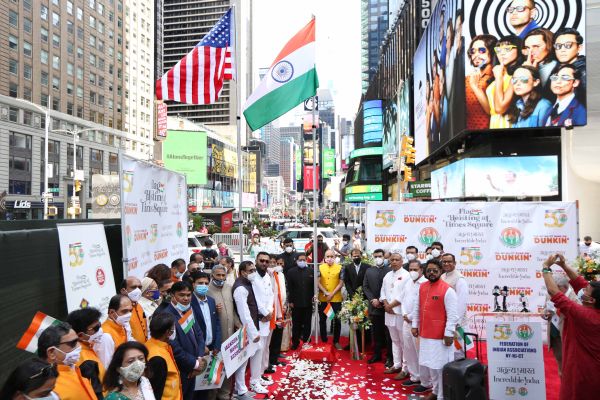 Others who spoke at the flag hoisting event were grand sponsor Kenny Desai, Deepak Patel of Dunkin Donuts, and Mr. Sethuraman of Incredible India who congratulated FIA on the historic event and wished everyone present on the occasion of India’s 74th Independence Day.

FIA Chairman Ankur Vaidya thanked all the sponsors and his team and the members of the Board of Trustees as well FIA’s senior advisors, Padmashri Dr. Sudhir Parikh and Padmashri Dr. H.R. Shah, for making the event a grand success. Vaidya recognized the support of the Consulate General of India in New York, as well as that of Hon. Mayor of New York City, Bill de Blasio and his entire staff, as well as the New York Police Department and the Fire Department. 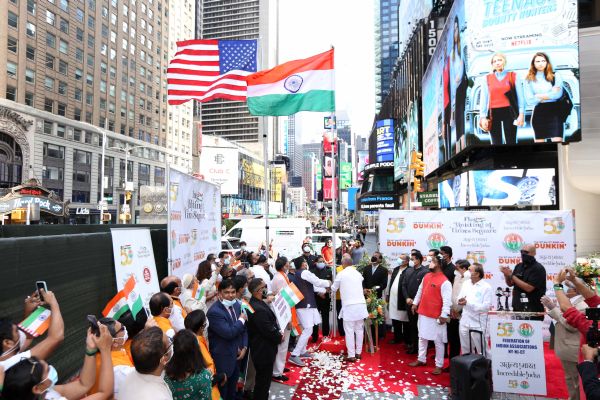 The Times Square flag hoisting ceremony is a testament to the Indian American community’s growing patriotism and is a fitting tribute to the FIA which is celebrating its golden jubilee year. Established in 1970, FIA of the largest esteemed umbrella organizations in the Indian community. Since 1981, the FIA has been organizing it’s flagship event – the annual India Day parade, which showcases India’s rich cultural heritage and history.

“I, along with my FIA family, team members and the patriotic community, share the joy and pride of such an historic celebration here in the New York area and back home in India,” FIA President Anil Bansal said. “Traditionally, for the last 40 years, FIA has celebrated India’s Independence Day in the form of the world famous India Day Parade on the streets of the financial capital of the world, New York City. However, this year due to the unprecedented havoc created by the COVID-19 pandemic globally, the FIA, in the interest of the community and in following the guidelines of the city, had to cancel the India Day Parade,” he said “This year, FIA added another milestone in its glorious accomplishments by organizing for the first time, the hoisting of India’s tricolor, at the Iconic, Times Square.” 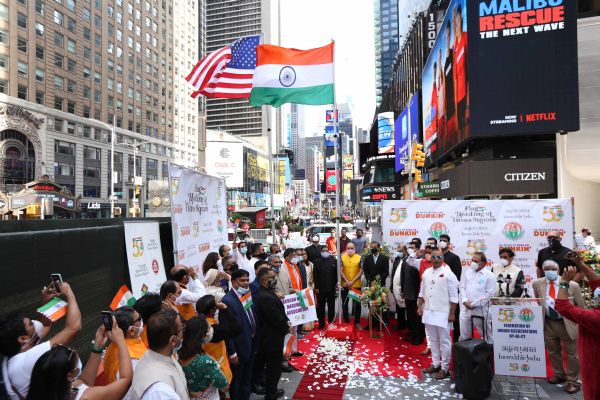 FIA thanks all its sponsors, Kenny Desai, Dunkin Donuts and /-Incredible India as well as the Empire State Building Trust Inc., for graciously supporting the Times Square flag hoisting event and making it a grand success. 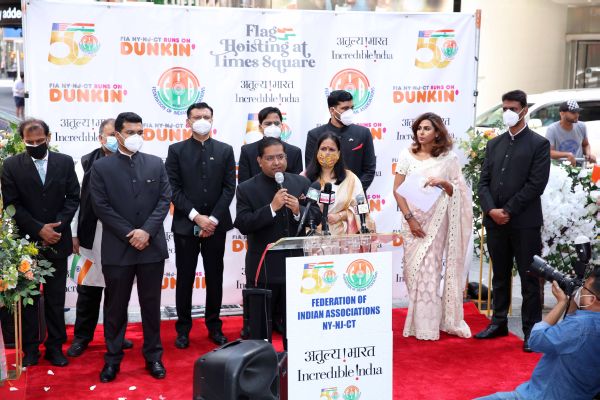 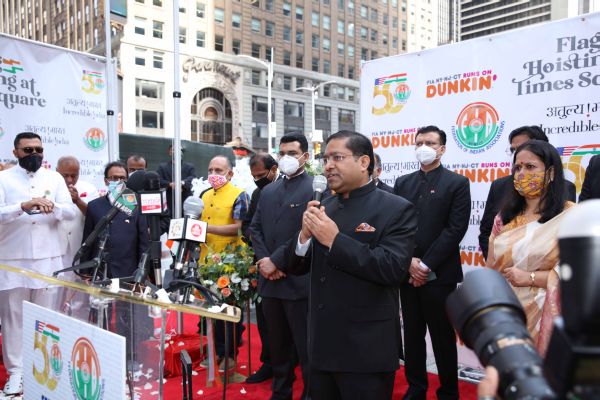 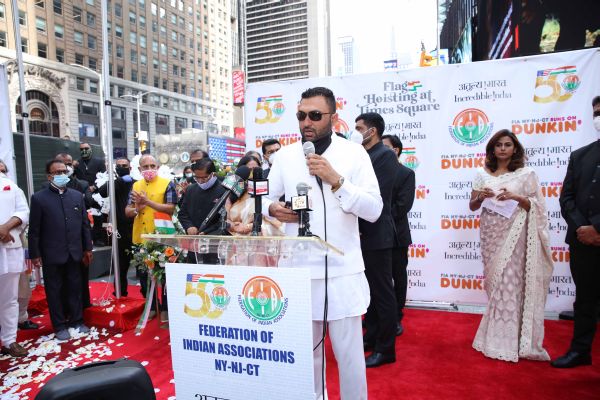 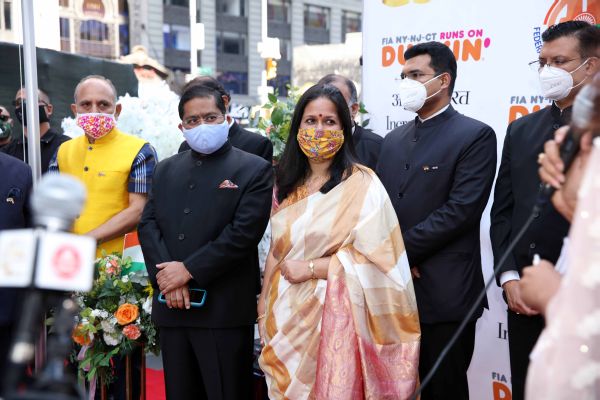 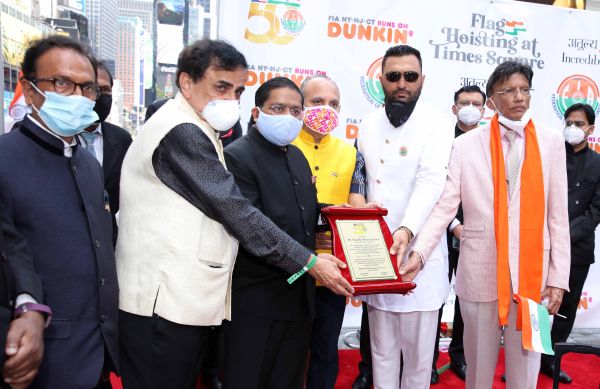 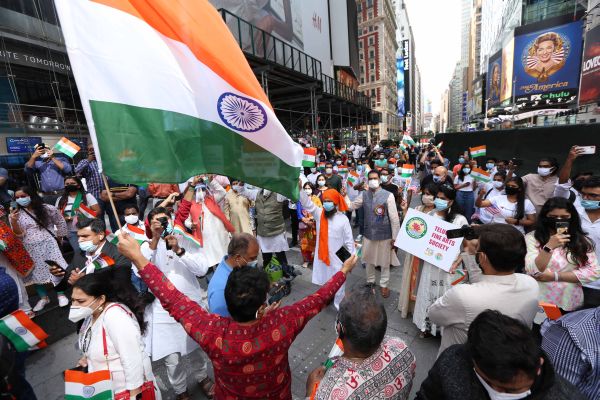 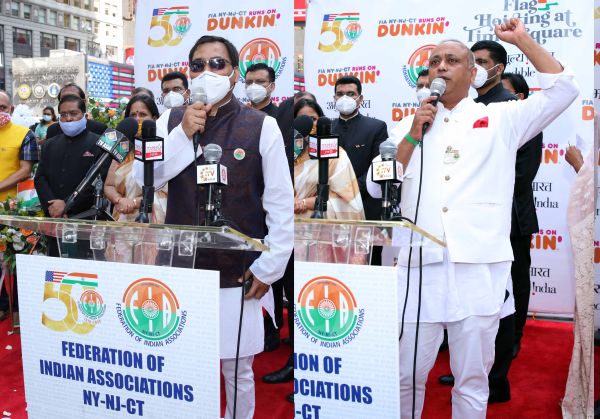