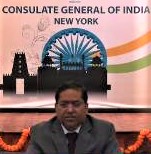 The deadly pandemic, COVID-19 that has been instrumental in the cancellation of almost all major programs and activities around the world, could not lockdown the creative minds of the leadership of GOPIO-CT. Taking the lockdown and the social isolation as a challenge, the organizing committee of GOIO-CT put together a grand celebration of India’s 74th India’s Independence Day Celebrations, connecting the people of Indian origin, community leaders and elected officials virtually, honoring and celebrating the freedom and democratic values of India and the United States, on Friday, August 14th evening.

In his keynote address, Stamford Mayor David Martin, greeted India and the People of Indian Origin on the occasion of India’s 74th Independence Day. He praised the great contributions of GOPIO and the Indian American community. “Global Organization of People of Indian Origin (GOPIO) is one organizations which not only helps its Diaspora community but all other communities,” said Stamford Mayor David Martin and you have been very gracious and have supported the people and served them generously. Your services and sacrifices have saved several lives in this time of pandemic,” he told the fast-growing Indian American community in Stamford and across the state of Connecticut.

He urged everyone to follow social distancing and wear mask. “I cherish the freedom the US won from Britain. While describing the United States and India as shining examples of being greatest democracies, Mayor Martin recalled the freedom that America fought and won from Britain centuries ago, just as how India won its own freedom from England 74 years ago. “All are welcome to this city. You are the city of Stamford.”  He concluded his address by reciting a poem by Sardar Bhaghat Singh which he said, represents both India and the US.

Consul General of India in New York Randhir Kumar Jaiswal was introduced by Dr. Thomas Abraham. In his remarks, “Today is a very special day for all of us. Not only it is the 74th India Day, but also, it is the celebration of India-US Friendship,” he told the participants, via Zoom from New York City.

“We have seen a fascinating transformation that has taken place in India – U.S. relations in the last several decades with deepening of our relationship based on our shared values of democracy, universal human rights, tolerance and pluralism, equal opportunities for all citizens and rule of law, and our bilateral relations have now developed into a Global Strategic Partnership, You  make India feel so proud of the values you hold in life and the many achievements and the contributions.” He congratulated the awardees and GOPIO for its services to the larger society.

Assemblyman Harry Arora, representing Greenwich, facilitated GOPIO and the Indian Americans on this special day of celebrating freedom. “India has been on a steady path of progress. While our adopted land is the oldest and most powerful democracy in the world, India has the distinction of being the largest democracy with diversities like religion, caste, creed, region and language and this day is celebrated by every Indian in all parts of the world. We live in difficult times, many lost their lives, impacting their wellbeing and overall economy. In spite of all the challenges, we need to be together to celebrate and to cherish this moment,” Arora said.

Rev. Sudhir D’Souza, the pastor at St. Philip Church, Norwalk, Connecticut was awarded the Independence Day Freedom Award 2020 for Service to GOPIO-CT and Community Causes. Srinivas Akarappu, Executive Vice President, GOPIO introduced the awardee as a GOPIO-CT volunteer and Board Member. Rev. D’Souza has been involved in many community service work in the Norwalk area. He has been organizing a Community Interfaith Festival which included Christian, Hindu, Jewish, Muslim, and Sikh traditions at St. Philip Church. In his acceptance speech, Rev. Sudhir D’Souza said, “Thank you for the award and been a great honor and the award goes to people of all faiths, who are part of the community as we work together to bring peace, food and comfort to one another.”

Dr. Thomas Abraham, Chairman of GOPIO International gave a brief description of how India has gown over the past seven decades and called upon the community to dedicate ourselves to freedom, justice and equality. “India made progress under a democratic rule in all the seven decades and now moving forward to become the third Largest economy in the world in this decade. As we celebrate 73rd anniversary of India’s Independence, let us rededicate ourselves to the cause democracy, freedom, justice and peace not only in India but all over the world. Let us also hope and pray that a vaccine will be available soon for the whole humanity against Coronavirus,” Dr. Abraham, a veteran Indian-American leader said.

Enumerating the great contributions of India and the Indian Americans, Dr. Abraham said, “India sent a large number of its brightest to America who have made substantial contributions in building up the economy. Our contributions have come to be recognized very well in the Health Care sector, as our doctors and nurses are in the frontline combating Covid. We have also made outstanding contributions in hospitality, science and technology and education. We are also not behind in political process. In addition to many lawmakers across the nation, we are proud that one of our own, an African/Indian American woman Senator Kamala Harris has been selected as the Vice Presidential candidate by Democratic Presidential candidate Joe Biden. We are very proud of Senator Harris, our community’s achievements in political process and our contributions to the American society.”

In his welcome address, Ashok Nichani , President of GOPIO-CT, while welcoming the participants and leaders to the virtual event.  Acknowledging the support and contributions of the Indian American community, he enumerated the numerous initiatives of GOPIO-CT responding to the pandemic and benefitting the local community with particular focus on the needs of the Indian American community. 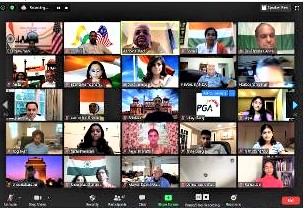 A Motivational Speech by Anju Tharakal, a youth on India Day and the India’s Independence Movement starting in the 17th century against the British rule, also highlighted as to how Covid has impacted everything including celebrations.

Earlier, the celebrations began with Sonali Gannu leading the participants with the singing of patriotic Vande Mataram, which was followed by the virtual flag hoisting and the rendition of the American and Indian national anthems. The hour-long celebration ended with a brief music entertainment by local artists.

As part of the celebrations, GOPIO recognized and honored High School graduates, who graduated from Connecticut School Systems, with scholarships to some students with need and achievements. “You are our future and we are very proud of you. Best wishes to you on your achievements and aspirations. Reach for the star,” said Beena Ramachandran, who had coordinated the GOPIO-CT youth program.

Bhavna Juneja, GOPIO-CT Chair of Board of Trustee and Program Chair, elegantly emceed the hour long event, coordinating the speakers and participants seamlessly, celebrating India and the achievements of the Indian American community.

Vote of thanks was proposed by Rajneesh Misra, Secretary of GOPIO-CT, for all those who were able to join in this celebration of Indian Independence.

Over the last 14 years, GOPIO-CT, a chapter of GOPIO International has become an active and dynamic organization hosting interactive sessions with policy makers and academicians, community events, youth mentoring and networking workshops, and working with other area organizations to help create a better future. GOPIO-CT – Global Organization of People of Indian Origin – serves as a non-partisan, secular, civic and community service organization – promoting awareness of Indian culture, customs and contributions of PIOs through community programs, forums, events and youth activities. It seeks to strengthen partnerships and create an ongoing dialogue with local communities.