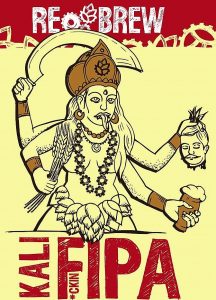 Zed, who is president of Universal Society of Hinduism, indicated that goddess Kali was highly revered in Hinduism and she was meant to be worshipped in temples or home shrines and not to be used in a re-imagined version for pushing beer. Moreover, associating words like “F*ckin” with a deity and linking it with an alcoholic beverage was very insensitive, Zed added.

Breweries should not be in the business of religious appropriation, sacrilege, and ridiculing entire communities. It was deeply trivializing of divine Hindu deity to be placed in such a manner, Rajan Zed emphasized.

Goddess Kali, who personifies Sakti or divine energy, is widely worshipped in Hinduism. She is considered the goddess of time and change. Some Bengali poets described her as supreme deity.

“Kali F*ckin IPA” (ABV 6.4, OG 15%, IBU 60) was described as: “an American-style IPA with a bright aroma of tropical fruits, grapefruit and lime. It will satisfy the most demanding hopheads and will not leave anyone indifferent”.

Reformation Brewery in Brovary, eastern suburb of Ukraine’s capital Kiev, whose tagline is “Drink. Think. Enjoy.”, was started in 2014.