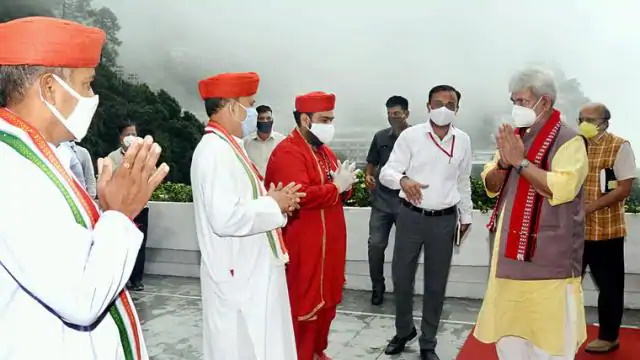 The political activities of the state have intensified after Manoj Sinha became the Lieutenant Governor of Jammu and Kashmir. Soon the Lt. Governor’s Advisory Council will be formed. Meanwhile, BJP general secretary and Jammu and Kashmir affairs expert Ram Madhav visited the state to take stock of the political situation there. Recently, many BJP leaders have lost their lives in terrorist attacks and in many places, leaders have resigned from BJP.

After abolishing Article 370 of the Constitution that gave special status to Jammu and Kashmir a year ago, the Central Government has strictly curbed terrorist activities in the state and curbed anti-national activities. Now it is going to increase political activities in Jammu and Kashmir afresh. Manoj Sinha’s becoming the Lieutenant Governor is considered an important link in this direction. Earlier, bureaucrat Girish Murmu was handling this responsibility, which has strengthened the administrative structure of the state. It is now the turn of the political innings.

According to sources, soon the advisory council of the Lieutenant Governor will be formed, after which the work of political activities and future preparations will be started. Various political parties are also getting active in the meantime. BJP general secretary Ram Madhav has also visited the state to take stock of the situation there.

In fact, for the last few days, terrorists have targeted BJP leaders. This has to spread fear among the people about BJP. However, even before this, the leaders of other parties have also been made victims by the terrorists. To increase confidence in BJP workers and leaders, their security is being tightened and necessary precautions are being taken.

According to BJP sources, the internal developments of the Congress can also affect the politics of Kashmir. State Congress leader Ghulam Nabi Azad’s sharp attitude towards the Congress leadership can move towards a new political equation. BJP can take advantage of this opportunity. Though it has not disclosed its strategy, it will try to make these internal differences of Congress in its favor in the state. The BJP is eyeing the Congress and National Conference leaders. Whom she wants to bring with her and start new political activities in the state.