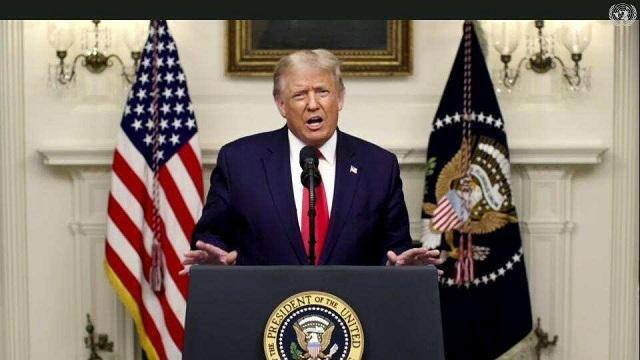 In this image made from UNTV video, United States President Donald Trump speaks in a pre-recorded message which was played during the 75th session of the United Nations General Assembly on Tuesday

US President Donald Trump on Tuesday blamed China for spreading the Covid-19 pandemic in the midst of a fierce rivalry with Beijing. He has requested the United Nations to hold China responsible for dropping the epidemic worldwide.

Addressing the 75th United Nations General Assembly session, President Trump said, “In the beginning of the Corona epidemic, China only prohibited domestic travel while continuing to operate international flights to infect the world.” The United Nations must hold China accountable in this matter. “

Responding to this harsh statement by US President Trump, Chinese President Xi Jinping said that China has no intention of fighting cold or hot war with any country. “Countries should not ask for unilateral and protectionism and work to ensure the stable and smooth operation of global industrial and supply chains,” he said.

The number of people infected with Corona in the US, considered the same global superpower, has reached 68,56,884 and 1,99,865 people have died so far. America is the most affected country in the world by Corona.