Delhi riot: Delhi Police changed the stand of the charge sheet after a lapse on Trump Chronology

A charge sheet filed in the Delhi riot case claimed that violence was planned during Donald Trump’s visit to India in a meeting held on 8 January. In another charge sheet recently, the police has removed this saying that the anti-CAA protests were part of the ‘terrorist conspiracy’ to carry out massive riots to get the lost land from BJP’s victory in 2019 general election.

New Delhi: A charge sheet filed last week by the Delhi Police reiterated the claims made in earlier chargesheets regarding the role of anti-CAA protesters in the February 2020 riots, with one notable exception: investigators have given their The disgraced claim has been removed that the conspiracy to incite violence during the US President’s visit to India in north-east Delhi was hatched in a meeting on 8 January.

In two chargesheets already filed in cases related to FIR 65/2020 and FIR 101/2020, this claim was clearly erroneous as the first news related to Trump’s arrival in India came only on 13 January.

The police had said that the purpose of the 8 January plan was to discredit India on the international stage and give a major blow to the central government on the issue of Citizenship Amendment Act (CAA) and National Civil Register (NRC).

The police never reacted to media reports regarding this apparent inconsistency of dates , which also questioned the veracity of its other claims.

But the Special Cell of Delhi Police filed an alleged January 8 secret meeting in the latest charge sheet filed under FIR 59/2020 for conspiracy to riot, which allegedly involved former student leader Omar Khalid, former councilor Tahir Hussain and the community Removed the ‘trumped’ thing from the description of activist Khalid Saifi who was involved and added the plot dimension to a less unreliable date.

In this way, the charge sheet of the special cell – the copy of which is with The Wire – makes the following claims with its important part titled ‘A Chronology and Conspiracy’:

● ‘US President Donald Trump’s visit to India was known to the conspirators since January 14, when this news first came on television media. Its program was formally announced on 11.02.20. The leaders of the dharnas of Chand Bagh, Mustafabad, Kardampuri, and Zafarabad held a meeting at 2 pm between February 16-17 to pursue a common plot.

● In this meeting, a decision was taken by the members of North East Delhi’s strike sites to stop the traffic in a coordinated manner during the visit of US President Donald Trump or to block the wheel. After Chakka Jam, all the members of the dharna were to adopt violent methods to intensify the protests.

Delhi Police is still saying that a secret meeting was held between Khalid, Hussain and Saifi at the Popular Front of India office in Shaheen Bagh on 8 January. It is claimed that the violence was planned here, but it seems that now he no longer believes in what he said in the earlier charge sheets. The last charge sheet was…..

● In the [8 January] meeting, there was a plan to do a big blast so that the central government could be given a big blow on the issue of CAA / NRC and in this way, to discredit India on the international stage. In the meeting, Omar Khalid assured not to worry about the money as the PFI organization would also be ready to provide the money and essential goods for these riots. These riots were planned before or after the visit of the US President in February.

However, in this new charge sheet, Omar Khalid has been introduced as the main mastermind and it has been alleged that his speech in Amravati, Maharashtra on 17 February – in which he talked about the need of Gandhian movement and the central government During Trump’s visit to India to oppose the policies of the government, people were advised to take to the streets – the purpose was to actually incite a riot in Delhi.

The charge against Khalid and the anti-CAA movement was first leveled by the IT cell of the Bharatiya Janata Party and then by Union Home Minister Amit Shah.

The FIR 59/2020 charge sheet also included responses from Republic TV and News18 — both of which showed edited excerpts from Khalid’s long speech — in which he told the police that he had no RAW (origin) of the Amravati incident. There was no footage and the clip he showed was from Amit Malviya, the head of the BJP IT cell.

The police managed to get the original recording and the charge sheet also included a copy of Khalid’s entire speech, yet the police neither pay attention to the fact nor record that Khalid repeatedly protested non-violent Demonstrations were emphasized.

Nothing objectionable was found in Kapil Mishra’s speech

While Khalid has been asked to instigate violence by asking people to take to the road, the charge sheet has BJP leader Kapil Mishra in front of anti-CAA anti-protest sit-in of Zafarabad in north-east Delhi on February 23, just before the riots started. The explanation given by Mishra regarding the disputed comment passed has been accepted.

In fact, Mishra had gathered his supporters at the dharna and threatened to take the law into his own hands if the police failed to remove the anti-CAA protesters from the street in the presence of the police. 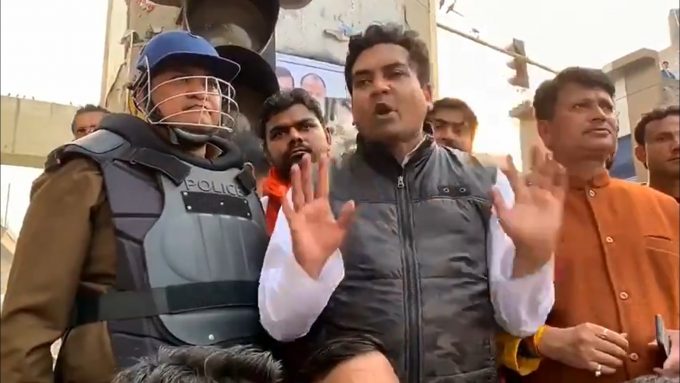 Just after his speech, clashes started in Zafarabad which gradually spread to another part of north-east Delhi, in which 52 civilians were killed. There were 40 Muslims among those who died. A policeman also died in it.

It has been said in the charge sheet that on 27 July the police asked Mishra, ‘What did you mean by saying that while the trumps are here, we will go peacefully, but after that we (not even the police) will listen Huh?’

Mishra’s answer to this was that his intention was simply to tell the police that if the road closed by the anti-CAA protesters would not be opened, they would also sit on the dharna.

Refusing to give a speech, Mishra said that he had told the DCP that ‘we appeal to you to open the road to Zafarabad and Chand Bagh. After that we will be forced to hit the road.

The charge sheet does not analyze why Mishra’s call to his supporters on the road was peaceful in the midst of an explosive atmosphere and how Umar Khalid’s speech in Amravati was violent?

Mishra’s role was not investigated further and no explanation was sought for the use of his speech on a Hindutva WhatsApp group whose members are accused of killing Muslims during the riots .

The charge sheet is also silent on the role of BJP leaders like Minister of State for Finance Anurag Thakur, who had instigated his supporters to shoot ‘traitors’ during the period of precisely ‘conspiracy’.

The Delhi Police claims that the entire history of the Delhi riots goes back to just before the passage of the CAA last December.

The entire anti-CAA movement is part of a terrorist plot

The essence of the police case is that the entire agitation against the CAA – from the procession by the students of Jamia Millia Islamia on 15 December (which involved a bus fire near the New Friends Colony), to the historic dharna of women in Shaheen Bagh Till- From its very beginning, it was part of a conspiracy to promote terrorism and to create disturbances.

The charge sheet has justified the imposition of the Unlawful Activities (Prevention) Act (UAPA) on 15 women and male accused on this basis.

The police claim that the conspirators had decided to ‘incite a large-scale riot at an appropriate time’ in the month of December itself. ‘The date of January 14, 2020, that is, the day when the news of US President Trump’s visit to India came out via television, gave a desired opportunity to carry out the conspiracy.’

Whatsapp groups’ arbitrary interpretation of the chat and dozens of names and anonymous witnesses – many of which contain parts of the statements, which are a clear indication of help by investigative authorities – based on the police’s story It is, she rests on a simple idea – the riots started with the well-planned decision to close the road in Zafarabad and other pickets, aimed at bringing the Hindus against the Muslims and denouncing the Modi government and canceling the CAA-NRC Had to force.

There are many inaccuracies and contradictions in this story, which are set to be revealed during the hearing. We discuss one here.

The chargesheet claimed that the Delhi Protest Support Group – a WhatsApp group run by filmmaker Rahul Roy – was the brain behind the closure of the roads and thus the riots .

No evidence has been provided of the role of the DPSG, apart from the fact that its members were debating the advantages and disadvantages of the move amid the changing conditions of Zafarabad. While one member appears to support the road closure.

Banjyotsna Lahiri, a member of the DPSG, questioned the blockade jam very strictly. His stand has been praised in the police charge sheet, but no cognizance has been taken in it that he is really Omar Khalid’s partner.

So how can it happen that on the one hand, Khalid is accused of being the main conspirator behind the closure of the road, while his partner strongly argues in favor of damaging any kind of road jam?

Whatever the case may be, if anyone accepts the weak argument that violence erupted due to the closure of the road, as the ‘pro-CAA’ mob had gathered to wave two-handed to them, but lasted for three days The geography of violence and its nature makes it clear that the police have a role in this along with other powers, which have been accused of bias and bias.

Apart from treating the anti-CAA movement as a terrorist conspiracy, this charge sheet goes a step further and alleges that the motive behind inciting violence by the conspirators was to ‘regain’ their lost ground, which Narendra Modi again reinstated in May last year.

‘From the day the results of the 2019 parliamentary elections were announced, there was a fascination for violence in the language and tone of the public statements of the main conspirators of the current case, and it had sat on their minds.

Violence seemed to be the only way for some people to regain their lost land and for some to prepare a new land, and this was the foundation that made people connect for the same purpose.

The implementation of the CAA and NRC gave the main conspirators what they were looking for – it was their last chance to shape their mental violence, which brought them closer together than before. Whatever happened after this was the result of this criminal conspiracy to commit violence….

If the Delhi Police’s focus on ‘mental violence’ and attachment to the ongoing violence in the minds of the conspirators’ is reminiscent of ‘Thoughtcrime’ (Thoughtcrime, according to George Orwell’s novel 1984, brings to mind any non-official idea), So there is no scope of any doubt by reading their charge sheet.

The Delhi Police says that the mere fact that the riot was hatched was a sufficient crime in itself, for which the accused can be prosecuted and punished even if there is no rioting and mass violence.