China sending PLA weapons to terrorists in Jammu and Kashmir, hexacopters, drones were also given to cross border 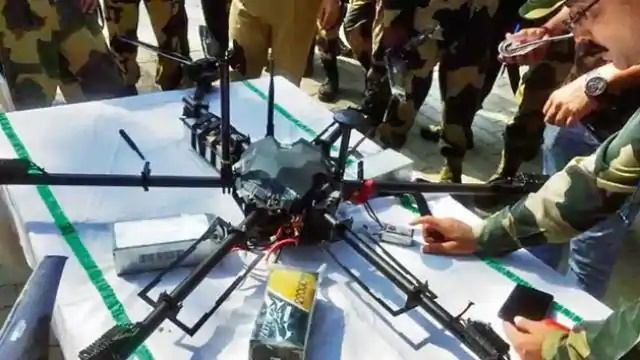 China, which is often a shield for Pakistan when it comes to terrorism, is trying to help its evergreen friend to increase terror in Jammu and Kashmir. ISI-backed terrorist organizations are delivering weapons to Jammu and Kashmir through Chinese hexacopters being used in the China-Pakistan Economic Corridor (CPEC). The special thing is that the rifles with which these drones and hexacopters are entering the Indian border are also made in Chinese government arms company Norinco.

According to a report by the Sunday Guardian, these hexacopters and T-97 rifles were handed over to the Pakistan Frontier Force by the Chinese government on the pretext of protecting CPEC. Indian intelligence agencies believe that China has been helping Pakistan in the last one year due to the rapid decrease in terrorist incidents in Jammu and Kashmir and wants to bring more and more weapons to the terrorists.

The ISI used these hexacopters and drones after realizing that Indian security forces operate on the principle that the intruder should not be fired without a weapon. Therefore, the ISI devised a way to send terrorists and weapons across the border to reduce the risk of terrorists being killed on the LoC.

Since January, security forces have recovered Chinese weapons in at least 15 incidents which were seized near an individual or LoC. Only six such cases were reported in September. On the night of 23-24 September 2020, the security forces arrested two people going from Jammu to South Kashmir. A Chinese-made T97 NSR rifle, four magazines with 190 rounds, an AK 47 rifle, four magazines with 218 rounds and three grenades were recovered from its possession. During interrogation, it was found that these weapons were dropped from the drone in Samba.

A senior police officer said, “The connivance of Pakistan and China to bring weapons to terrorists in Jammu and Kashmir is becoming more apparent with each passing day.” We have many evidences that Chinese goods are being used to spread terrorism in India. ”

On 14 September, the security forces recovered two China-made QBZ 95 rifles in the Gurez sector of North Kashmir when they challenged the infiltrating militants. The terrorists threw weapons before jumping into the Kishanganga River. The bodies of two militants were later recovered. Earlier on September 12, one AK 47 rifle, one 16 rifle and two pistols were seized at Ferozepur studs and on 8 September one AK 47, one M-4 rifle, two magazines, six pistols were seized at the international border.