During a solemn virtual ceremony, which was live webcast around the world, GOPIO-Manhattan Chapter was launched, with a new team led by Shivender Sofat as the President assuming charge of the GOPIO-Manhattan Chapter on Thursday, September 24th, 2020. Attended by several community and business leaders from around the New York region, Consul General of India in New York, Randhir Kumar Jaiswal, inaugurated the new Chapter.

The program, compered by Co-Secretary Dr. Lisa George with Co-Host Bhavaya Gupta, started with American National Anthem by Shruti Sen followed by Indian National Anthem by Jaya Sharma. Since Mahatma Gandhi’s 150th Anniversary was being celebrated throughout the world, in commemoration, his favorite bhajan Vaishnav Jan To Tene Kahiye was sung by Jyoti Singh.

Ambassador Randhir Kumar Jaiswal, Chief Guest, said, “It’s a privilege to be able to join you all in inaugurating the GOPIO-Chapter, which will strengthen GOPIO, the NRI community and the Consulate in New York.” Ambassador Jaiswal congratulated the leadership of GOPIO, which he said, “has played a stellar role in shaping Indo-US Relations. We are proud of your achievements.”

Showering praises on the Indian Diaspora in the US, the Senior Diplomat from India said, the success stories of every Indian American is “a great source of strength to the people in India. GOPIO has played an important role in fostering this relationship, he said. While assuring whole-hearted support to GOPIO, he urged GOPIO to “connect with the youth both in India and the USA.”

Dr. Thomas Abraham, Chairman GOPIO International, in his introductory remarks said, “GOPIO was born in 1989 and today, it has over 100 chapters across the world, contributing to the larger community. GOPIO chapters also serve the local communities in need, by sponsoring soup kitchens and giving scholarship to needy students. During the Covid-19 period, GOPIO chapters have been making financial contributions and replenishing food items at the food pantries serving the needy. Some chapters also provided N-95 medical masks to frontline workers, he said.

Summarizing the long-felt need for a GOIPIO Chapter in the Business Capital of the US, Dr. Thomas Abraham said, “In Manhattan, there are a large number of Indian-American young professionals who move to the city from all over the country. Also, many parents are moving to Manhattan to be closer with their grownup children who work in New York City. We have been receiving enquiries from those who move to the city to join a GOPIO chapter and we want to make that happen.

Shivender Sofat. President, GOPIO-Manhattan, said, GOPIO was started in NYC and now we are back in action reviving the organization in the city, where 60 to 70 percent of NRIs have a connection. Describing some of the programs GOPIO-Manhattan has envisaged, the President of the Chapter said, “Motivate our Indian Diaspora community to participate and help in local charitable and social service activities including soup kitchens and walkathons benefitting local charities; Organize seminars and symposium on subjects of interest to the Indian Diaspora community; Host elected officials from New York and India with interactive sessions; A welcome networking reception and dinner for all new students from India who join colleges and universities in New York city; and, Build an Indian American Youth and Young Professionals network and organize program for them.”

Prof. Arvind Panagariya, a Padmabhushan Recipient, former Niti Ayog Vice Chairman and a Faculty at Columbia University, while according a warm welcome to the new Consul General in New York, shared his greetings to the new OIffice Bearers of the GOPIO Chapter in NYC. He applauded Dr. Thomas Abraham and called him “a Pillar of the Indian Community globally.”

Prof. P. Somasundaran, a Padmashri Recipient and Faculty at Columbia University, in his address, complimented GOPIO, which he said, “is a brainchild of some creative people.” Referring to the extreme challenges, particularly climate change, chaos and political violence, he said, “We need the comfort and support of each other. Current pandemic has shown how important and critical it is to stay united and for all of us to work together.”

New York State Senator Kevin Thomas, described the launch of the GIPIO Chapter in Manhattan as “awesome” and thanked “GOPIO for bringing us together as one family.” He praised the Indian Diaspora for its great contributions to the larger American community. “I am so proud to be the first Indian American Senator in NY,” he said. Jenifer Rajkumar, the first Indian American candidate for NY State Assembly called upon the Indian Diaspora to stand united to promote India and its heritage in the United States. 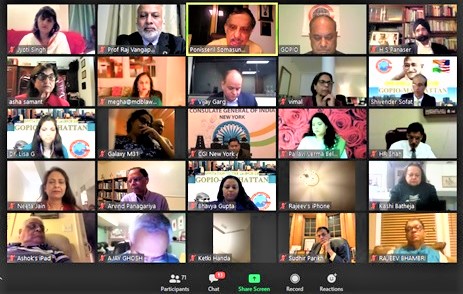 Dr. H.R. Shah, a Padmashri Recipient and Chairman, TV Asia, while offering whole hearted support, extended his heartfelt greetings to GOPIO and the officers of the New Chapter. He called upon the 5.7 Million Indian Diaspora to play an active role in the local communities and in politics. He called upon GOPIO to “encourage the new generation and motivate them to join politics and serve the community.”

Dr. Sudhir Parikh, a Padmashri Recipient and Chairman and Publisher, Parikh Worldwide Media, in greetings, congratulated GOPIO and the leadership of Dr. Thomas Abraham “for his vision” and wished the best to the new Chapter team for the leadership. Stating that he has been associated with GOPIO since its inception, he described GOPIO to be “a home away from home.”

Neeta Jain, a Democratic leader from Queens and national delegate for Biden, who is running as a City Council member, shared about her 30 years of fight for “equality and cultural recognition, which is ongoing.” Dr, Navin Mehta, Chairman, Bharatiya Vidya Bhavan, NYC, praised Dr. Thomas Abraham, who is “always with full of energy.” Extending wholehearted support to GOPIO, said, New York City has much potential and “we can do so much together.”

Indian American Global Chamber of Commerce President Rajeev Bhambri said that GOPIO Manhattan will fill in a void for providing service to our community and extended all help through his media outlets.

GOPIO-Manhattan’s charitable and social service activities got a boost when Philanthropist Sreedhar Menon committed $10,000 for the next two years.

The hour and a half long program concluded with greetings by GOPIO International Coordinator-at-Large Dr. Asha Samant and vote of thanks by GOPIO-Manhattan Board Member and Legal Advisor Megha Bhouraskar.

GOPIO International is Pan-Indian community organization for NRIs and PIOs with over 100 chapters spread in 35 countries. In the New York area, GOPIO has chapters in New York (Central NY and Queens & Long Island), in New Jersey (Central and North) and in Connecticut. These chapters organize programs tailored to the Indian community, motivating the community to participate in civic and local community activities, and provide services to the larger society. GOPIO-Manhattan is already registered as in New York State a charitable organization and has accorded non-profit 501 (c) (3) status by the IRS.