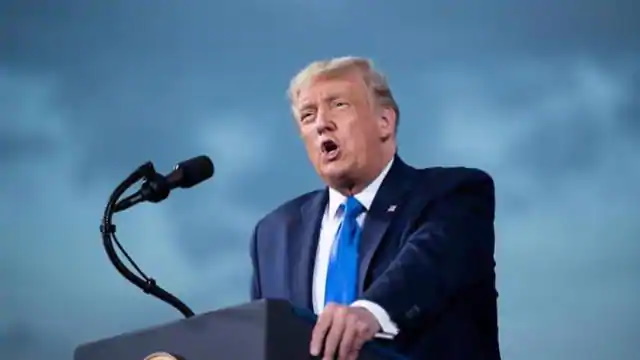 US President Donald Trump, who arrived in the White House after being treated for a Corona virus infection, has expressed his desire to hold rallies in the wake of the presidential election. Doctors said he could return to public life by Saturday.

Trump and first lady Melania were found suffering from Covid-19 last week. He was admitted to the army hospital for treatment. Trump was discharged from the hospital on Monday. Doctors said that the President has not had fever since Friday last week. On Thursday night, Dr. Sean Conley, a physician at the White House, said that President Trump’s treatment of Kovid-19 by a team of doctors was complete.

He said that the President was diagnosed last week and this Saturday would complete ten days. Conley said that my guess is that by then (by Saturday) it would be safe for him to return to public life. In an interview to a news channel, Trump said he was feeling good and wanted to hold rallies. He said that I feel good, very good but also very good. I’m ready, I want to do rallies.

US presidential election to be held on November 3, but so far 66 lakh people have already voted through postal ballots. Nearly 10 percent more people have voted with postal ballots than in the last election. This time there is a close fight between incumbent President Donald Trump and Democratic Party’s Joe Biden. It is noteworthy that the United States Election Project has given this information after obtaining preliminary data.

The chairman of the non-party commission, which conducts debate among presidential candidates in the US, said it is not considering holding the second debate face-to-face instead of digital. US President Donald Trump’s team requested to have a face-to-face debate. Commission chairman Frank Fahrenkopf said late Thursday that the commission would not change its decision. This means that the second debate will probably not take place. The commission decided on October 15 to conduct a digital debate after Trump was found infected with the corona virus.

Michigan Governor Gretchen Whitmer on Thursday, linking US President Donald Trump to his failed kidnapping conspiracy, argued that his words encouraged extremists. Those plotting the demise of Democratic leader Whitmer have been arrested. Whitmer said Trump has denied science in the last seven months of the Corona virus crisis, ignored his health experts, created mistrust, and created anger. Has convinced people who spread fear, hatred and division.

Trump’s remarks on Harris are condemnable: Biden
Biden described US President Donald Trump’s remarks on his party’s vice-presidential candidate Kamala Harris as scandalous and against presidential dignity. There was an official debate on Wednesday between Democratic candidate Kamala Harris and Republican nominee Mike Pence for the vice presidential election, which discussed a range of issues such as jobs, China, racial tensions and climate change, dealing with Trump’s Covid-19 situation. Hours after Trump’s remarks, Biden hit back, saying that the American people were tired of these things. Biden said it was condemnable, against the dignity of the presidency, and that the American people were now upset over these things. They know what this person is like and it has to be stopped.