Sangh Parivar who fears the shadow of advertisements (Video) 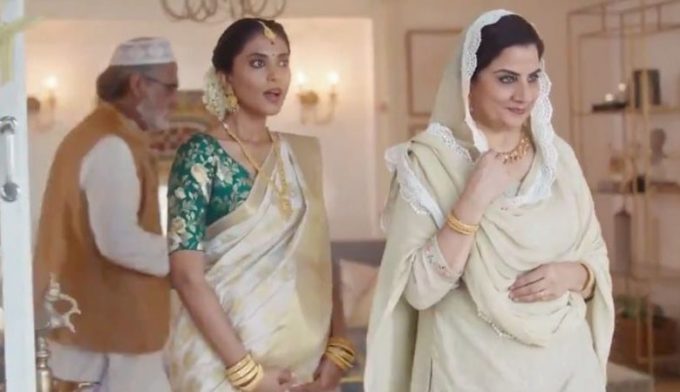 The list of leading brands facing the threat of boycott by the Sangh Parivar goes on and on. Since the Modi government came to power, the country’s leading companies have had to withdraw a number of advertisements made by them for unjustified allegations. The most recent of these is the advertisement of Tanishq, the jewelery brand of the Tata Group.

The Sangh Parivar and Hindutva groups have issued a ‘Love Jihad’ certificate for an advertisement depicting a relationship between a Hindu daughter – in – law and a Muslim mother – in – law. The theme of the advertisement is the ceremony prepared for the pregnant daughters-in-law at their house before giving birth. The ad says that she got married to a family who loved her like their own daughter and arranged a ceremony that was not in their family to make the daughter-in-law happy. Tanishq described the video on YouTube as “a beautiful reunion of the traditions of two different religions and cultures”. But as usual, Sangh Parivar cyber fighters have come forward alleging that the advertisement hurts Hindu religious sentiments and that the Tanishq company is trying to smuggle love jihad. The boycott call against the jeweler was also spread on social media. Within seconds, they were trending on Twitter.

But with more cyber-attacks and criticism of the ad, Tanishq was forced to withdraw the ad from YouTube. But this did not end the anger of the Hindutva organizations. They came back to the scene, asking the company to apologize unconditionally. The Sangh Parivar activists who attacked the Tanishq store in Gandhigram, Gujarat, the other day, forced the showroom manager to buy a written apology. The letter was later circulated on social media and was seen as a self-fulfilling prophecy.

This was the fate of all the advertisements of prominent brands in India depicting the intricacies of Hindu-Muslim friendship. Earlier, the Sangh Parivar had launched a similar attack on Hindustan Unilever’s Surf Excel. Last year, Surf Excel released a film depicting the friendship between Hindu and Muslim children in connection with the Holi celebrations. The ad was a message from a playmate who was protecting a Muslim boy from going to the mosque to wear Holi colors on his clothes. But the Sangh Parivar organizations came out with a similar allegation of jihad and demanded the withdrawal of the advertisement and an apology. But it is noteworthy that they were not ready to withdraw the ad or apologize.

But a new campaign criticizing Tanishq’s campaign is also active on social media. Many people have been sharing the ad video on their social media walls, expressing support for the ad and calling for an end to extremist sectarianism and hate speech.

At the same time, it should be read in conjunction with the position of the country’s leading brands, Bajaj and Parle G, which have stated that they will not advertise on channels that carry hate propaganda and communal news. The fact that there are at least a few people who can take a proactive stance on the digital media that is being polluted every day gives at least some hope for India’s democratic future. Therefore, companies including Bajaj and Parleji have a lot to learn from Tanishq.