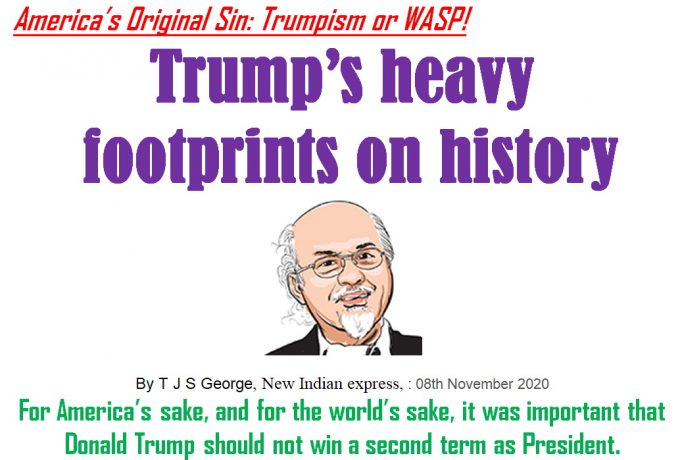 Trump is gone, but not Trumpism, which is equivalent to ‘White supremacy’, WASP(white-anglosaxan-protestant), the ORIGINAL SIN of America! It endures for ever and ever!

Donald Trump is not an American, just one of the immigrant only! So are 99% of Americans today. The true Americans are the original natives called American Indians. Most of them were butchered by the colonizers, on their march towards the Wild West.

Prisoners in own land!
The survivers, they imprisoned in enclosures called RESERVA-TIONS. I visited at least one of them, San Domingo Pueblo, in New Mexico, to have a personal experience of their miserable plight in their own native land! 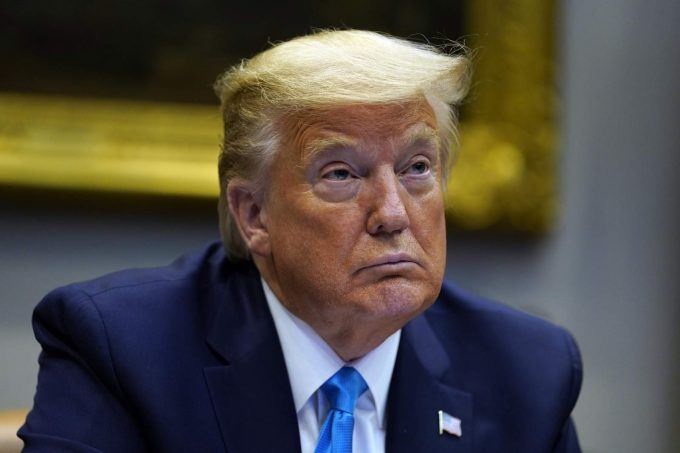 Now what we have is Trumpism stopped for a moment, by the arrival of Joe Biden, a second Catholic in the White house, paradoxically built by the sweat of black Africans brought as slaves. Their situation has not changed much, nor will it soon, if we have to judge by what happened in the past.

Hope on Horizon!
But there is much hope, thrown up by Biden and Kamala Harris of the first Indian origin. She hoped, she would not be the last. That may be just a lame hope, that gender equality will finally take hold of even America, world’s super power today!

What has become the ‘once Great Briton’ now just a ‘little England’ or to the once great ‘Russian Block’ now gone to pieces! What else is happening in US after the arrival of Biden and Kamala? Can Trump keep the divided US united by harping on to his Birtherism which Obama proved wrong?

Global Village!
Today we all have to wake up to the reality of living in a Global Village of instant communication beyond space and time, beyond this country or that country, this religion or that, this color or that – just humans all “Fratelli Tutti!” with Kamala and Biden at the helm beyond all divisions!

Let those revolutionary French ideals of unity, fraternity, liberty and humanity be cultivated to reign supreme! “Yes We Can” if we have the will and determination of an Obama to reverse all wrong moves Trumb has taken. For what?

Make straight the WAY!
To make straight the WAY OF THE LORD of the universe, which is always with the last, least, lost and hungry which propelled the SON OF MAN to cry out: I HAVE PITTY ON THE MULTITUDE! Let that PITY guide our footsteps! James Kottoor, Editor CCV.

For America’s sake, and for the world’s sake, it was important that Donald Trump should not win a second term as President. That he came close to it points to the power of a disturbing element in American life — racism. Ultimately, racism counts in America.

In all white countries, there are blacks. But American blacks represent something distinctly American. This relates to the prominent role the blacks played as slaves in American history. Following the civil war during the presidency of the great man, Abraham Lincoln, nearly 4 million slaves were freed.

Donald Trump is not just an American, he is a white American. This was so when he was just a real-estate businessman making millions in New York. At one point, the Justice Department filed charges alleging racial bias in the Trump family’s company. Trump, of course, dismissed the charge as “ridiculous”. In the casino the Trumps ran in Atlantic City, it was standing practice that whenever Trump made an appearance, the bosses in charge would order all black people off the floor.

It is an accepted fact that the coastal states of America are relatively liberal, while the south and the hinterland are conservative enough to be racist. This explains Trump sweeping the south and the interior. Clearly, a substantial chunk of American citizens are influenced by the hangover of the days when racism was part of life. Slavery was a legally approved practice from the day the United States was founded because the influential plantation owners had institutionalised the import of Africans as slave labour.

There was a larger cultural mindset that facilitated the import of African slaves. This was the Anglo-Saxon insistence that non-Protestants were not their equals. Thus Irish, Italian, Polish and other “alien” non-Protestants were treated as outcasts. Hispanics, Jews and Middle Easterners like Arabs and Iranians were never recognised as fullfledged Americans. The so-called Native Americans were subjected to organised genocide. Those who still survived were confined to internment camps made especially for them. Racism marked the contours of American history.

Trump is a proud inheritor of that history. It is no surprise that he helped coin that peculiar American phrase, “birther movement”. It was the birth of Barrack Obama that was referred to. Trump was the initiator of the theory that Obama was not born in America. That was the only way he could face a popular leader like Obama. Trump’s line proved a lie when Obama released his birth certificate and said, “We have no time for this kind of silliness.” The phrase stuck. Birtherism now means the theory that anyone not born in America, and not white, is not a real American.

Seen from any angle, a racist approach of that kind was not welcome to many Americans. Trump tried to wriggle out of the mess by saying that he was only talking about the need to crack down on forged birth certificates, a policy followed by Obama and George Bush. No one bought that line, of course. People knew that Trump went to the extent of being nasty in implementing his discriminatory policies. According to the Washington Post, a growing number of Latino citizens in Texas are having their citizenship questioned and being denied passports. A member of the Council on Foreign Relations said: “Birtherism is now federal policy. Anyone who is not white is suspected of not being a real American.”

That Trump has gone so openly birtherist and that half of Americans approve of it bode ill for America and the world. Don’t fail to note that they gave such a high-level of support to him when a decent alternative was available in the persona of Joe Biden. Active in politics and campaigning vigorously, Biden is a more weighty opponent than John McCain was to Obama in 2008. It seems that the perspectives of American voters have changed. Values and ambitions have changed, for the worse.

Is the world facing a new America? After the collapse of the Soviet Union, America had become the sole superpower. Then China rose to challenge it. Trump has no notion of China and what it means. An American leadership that cannot understand China and Asia is a leadership doomed to fail. The question is whether Trumpism will drag Americans down. If that happens, it would be a tragedy. It is a tragedy that we had a world leader who could not see beyond him and his twisted philosophy. In real terms, it symbolised the fall of America.