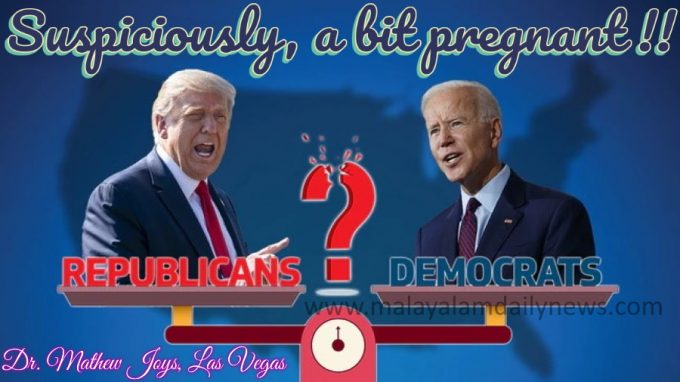 An American Citizen asks “personal character or the national policy of the president that matters most?”  May be both are important, when you think about American President. There is no politics involved, only intriguing concerns disturb the fragile minds of common man elsewhere. While the presidential election votes were being counted, for long a strong  group alleges that there were widespread fake votes dumped. It might have happened or not, nowadays even God does not know.

In this country, where we boast that we have zero tolerance for most things and we are perfect to land the missile exactly on the Captain’s head on a moving submarine, how come we are unable to declare our voting system fool-proof?

Even on most of the TV channel discussions, we heard a consoling remark that President Trump is lost, because of his character and language. May be true. Trump is not an eloquent orator, nor he is a seasoned politician. Americans knew it four years back; and chose him as president of the nation. We know his achievements outweigh his failures. That is why he got only 46.1% of popular votes winning over Hillary Clinton, whereas he could gather almost 47.5% during his so called “defeat” in 2020.

An average American can only succumb to his wild thoughts that Trump’s leadership during the last four years were not a total collapse, but overall a peaceful, warfree, safe term for the country. (Except for the Covid pandemic and his tough attitudes with some dubious countries and global organizations).

Sincere to the history of America, we had good presidents comparatively. I have heard much about John F Kennedy and Bill Clinton, who were much adored for their “sense, sensibility and sensitivity”. Exceptionally they were even sensuously emancipated by womenfolk for they were handsome or glamourous. During the voting period, that too matters, because there was abundant hatred towards Trump by our womenfolk. There is absolutely no discrimination gender wise when hate grows faster than cancer, among voters; Trump proved that. But the magnifying glass glows the stains on those faces of those well accepted presidents, even now. Can we tell our children that any of these Presidents are “role models”?. The good old George Washington or Abraham Lincoln were exceptional, technology and social media were then nil to expose them otherwise.

Coming back to the track of the topic, the character of the President of a nation is of utmost importance. Diligently that itself won’t lead the nation to be safer or prosperous. Proper policies to simplify the economic burden of the citizen, and securely pushing the nation healthier, stronger and economically prosperous can only be achieved with smart political policies. Economists approve of the latter part of the President. Trump’s rating is good enough; and they have no interest in analyzing the personal, racist, a misogynist, and timid habits of the Presidents.

“We call on all relevant authorities to ensure tabulation of votes and resolution of complaints is undertaken in a transparent and credible manner,” US State Secretary Mike Pompeo said. Still, his suggestion the election’s outcome was still unclear came as many key leaders around the world are already congratulating the President-elect Joe Biden on his projected victory.

We remember that during  2000 we took about 37 days to ensure the counting of votes. We have gone far ahead during the last 20 years. We need to count all legal votes, and abandon all suspiciously illegal votes. That ensures that acceptance of legitimate election results are essential for any fledgling democracy.

Off late, we hear that Georgia State is venturing for a recount of the 2020 votes by hand. That escalated the suspicion that something is slushy there with the voting. If we are good enough to reveal some intentional malpractices in that state, it is evident that the system is malignant or corrupted.

If the investigation into election fraud finds NO evidence of wrongdoing; then so-be-it, Biden wins. But voters need to know that it was a fair and honest election and their vote counted. All illegal votes need to be removed from the totals. If observation of vote counting was prohibited, then there needs to be a recount with total transparency, no excuses. If some fraud is detected, it might have happened everywhere. And Let none declare  “there was very little fraud so it won’t make a difference”. That is like being “a little bit pregnant”. We have to check everything even if it takes months. We need to be faithful to the voters and model to other nations. We are either pregnant, or not ; there is no situation called – ” a little bit pregnant”.