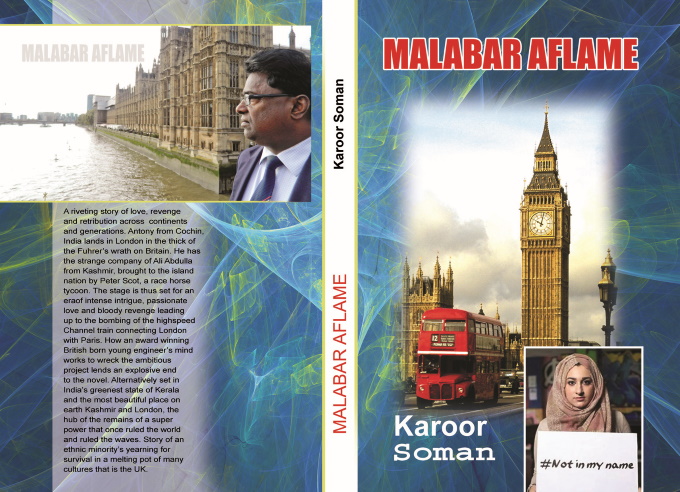 Abstract: The paper is an attempt to explore issues of post-colonial diaspora and indentureship in Malabar Aflame by Karoor Soman, the novelist who joined the burgeoning world of Indian Diaspora some four decades ago to end up in the United Kingdom and passionately join the mainstream of life there. His debut novel, partly autobiographical, emerges as a dichotomy of the changes that come over the author’s chosen land and the small community of Malayalees that thrive in it.

The objective of the paper is to identify the experiences of postcolonial diaspora and indentureship narrated through the lives of the characters that undergo “double discrimination”- caste system in Kerala and racial discrimination in US. The protagonist’s immense desire and struggle to carve a niche in his host country is symbolic of Indian diaspora narration. The paper also proposes to trace the trajectory of the change in narration- a narration of the protagonist being obedient and compliant before India gets its freedom and his
resistance towards discrimination by his white superiors in the years following India’s freedom. The paper will also portray the absence of belongingness of the second and third generations who are unable to feel at home in their foster country.

The paper traces out the characteristics of labour diaspora and indenture projected through the lives of the characters in Karoor Soman’s Malabar Aflame. This labour diaspora goes through two stages, that is, obedience during colonization to resistance during post-colonization. Malabar Aflame is an intrinsic tale of love, betrayal and moreover the struggle undertaken by a Malayali family to survive in UK which itself is recovering from the damages suffered during World War II.

“Recently “post-colonial” has been transformed into a noun, used both in the singular and the plural designating the subjects of the “post-colonial condition”. The prefix “post” aligns the “post-colonial” with another genre of “posts”- “post-war”, “post-cold war”, “post-independence”, “postrevolution”- all of which underline a passage into a new period and a closure of a certain historical event or age, officially stamped with dates. (4)”

With the passage into a new period comes a change in behaviour of the citizens of these post-colonial countries. They have ultimately got freedom after years of subjugation resulting in a change in attitude towards their colonizers- a shift from obedience and compliance to resistance.

The novel begins with the year of 1945 when London is recovering from the wounds caused by the end of World War II. India is still under the clutches of the British colony. This is when Antony is placed in Peter Scott’s race horse enterprise. He is loved by Peter Scott for his obedience, honesty and dedication that he pays in bringing Antony’s wife Mary and his two children to UK. He is also promoted to store supervisor and is entrusted with the keys to the store of Scott’s enterprise much to the disapproval of his white coworkers. The latter taunt Antony and try to put him down but Antony never reciprocates. He is later framed for the theft in the store for which he was not responsible. His innocence was not recognized and Scott fires him from his job “…Like a culprit Antony stood listening to all. (74)” He leaves without a word of protest or fight to prove his innocence- similar to the condition of our colonised country.

Years later, in 1952, Antony goes to attend a horse race where he meets Scott. A Post-colonial attitude of resistance is etched into Antony’s personality when he meets his previous employer there. Though he could have accepted Scott’s offer, he resisted it as he was once booted for no fault of his. Antony instead turns down the offer politely and opts to continue with his work at a construction site. Though the present work rewarded a menial pay, it did not meddle with his dignity. Hence, he walks away from the offer with his head held up high.

Robert Cohen puts down a few guidelines to distinguish Labour diaspora in his Global Diasporas:

“If, however, among overseas workers there is evidence over time of (a) a strong retention of group ties sustained over an extended period; (b) a myth of and connection to a homeland; and (c) significant levels of social exclusion in the destination societies, a labour diaspora can be said to exist.” (Cohen 61).

Since Antony hailed from a poor low caste family in Kerala, he knew the hardships of life and thus is seen to carry dreams of making money out of his employment abroad. His friend Ali, a Kashmiri soldier, is also undergoing a similar struggle to succeed in life. All along the novel, we find the lives of both Antony and Ali adhering to the above listed categories. As readers, we understand towards the end of the novel that though they were “transferred” as soldiers from Cochin to Southampton, the experiences that they undergo put them under the categories listed by Cohen. This results in their experiences to be listed under Labour Diaspora.

Indenture was a world-wide phenomenon which started in the nineteenth century. It was initiated by the British in Mauritius and was considered as an experiment;

“The Great Experiment after the abolition of slavery was to demonstrate to the world the superiority of free labour over slave labour. Indenture involved the mass migration of workers from India, China, Africa and South East Asia to labour- importing colonies. Mauritius was the first country which had recourse to indentured labour. Other British, French and Dutch colonies then adopted the system after its success in Mauritius.” (An Overview, 3) An indentured migrant, as described in An Overview of History of Indenture, is “an individual who had not paid his or her passage but had entered into an agreement to receive transported assistance to a colony in return for a fixed period of labour (6).

Antony loses his job due to a misunderstanding between him and his employer. He later takes up work at an underground rail tunnel construction site for a menial pay. This is where he describes the construction sites all over Britain after Second World War as a hub of workers indentured from different countries. He is asked to fill in a card that enlists his work hours and other necessary information related to his work.

“1948. Britain was recouping from the destruction caused by the Second World War. Construction work was in plenty everywhere. Importing workers from Ireland and West Indies was one way of fighting labour shortage. Antony was one of the latest addition to thousands of new workers added to reconstruct London out of the destruction of the War (82).”

Therefore, he enrols as an indentured labourer and starts from scratch- in such a manner saves money enough to buy a house and educate his children.

Though Antony and Ali go through moments of professional jealousy, there is always a strong retention of friendship as both are well aware that they remain united in their struggle to live in an alien country. In the novel, Ali is happy that Antony is fired from his job but Antony, himself, comes to the rescue of Ali when the latter’s life is at threat. Antony even goes to the extent of beating Ali’s white colleague in order to save his friend (100). Their ties even take them to a point when both their families stand together to protect the nation from a terrorist mastermind, Ali’s son Akbar, planning to plant a bomb in a train. Even the ladies of the family protect each other when their families undergo different issues. When such issues occur, they help each other over their religious boundaries, all the while considering each other as siblings.

Throughout their survival in UK, there is a constant connection and reminiscence of their homeland. The characters might be busy in their day to day lives struggling to figure out a way to sustain themselves, nevertheless, there is a constant urge to return to their homeland. Anthony hails from a low caste Pulaya family in Kerala. This has invited a lot of discriminations in his life. He remembers being always made to sit at the back of the class as no admission was given to children belonging to Ezhava, Pulaya and Paraya castes. They were not even allowed to walk or play with the high caste pupils. (48)

Mary, Antony’s wife, remembers her life back in Kerala; “Our land is the slaughter house of untouchability. Some poor are massacred there in the guise of some wretched laws codified by the country lords. (60)” Though their native homeland has given them many hurtful memories to recollect, the urge to return to the land that they love and hold dear never fades. Antony always wished to settle down in Kerala after his retirement. Since his children do not let him go, he resorts to teach Malayalam to the children of Immigrant people in UK. We feel that this is the only thread that attaches him to his much loved homeland to which he dearly holds on. He makes it a point to be regular in his classes in spite of his various illnesses because he doesn’t wish the new generation to stray completely away from their motherland.

“Antony and Mary dreamed of a day when they would take their grandchildren for a tour of the land
of their ancestral home of milk and honey…They would be wonder struck when told that in their
neighbourhood in India, they had a family that had a dozen elephants under their care and in a
temple town called Thrissur, they had an annual festival of Pooram where a hundered elephants are
paraded!” (183-184).

At first all the characters consider their host country as “a dream world (59)” but eventually they understand that they can never cultivate a feeling of “belongingness” in the foreign land. No matter how hard they work or how well they gain proficiency in English, at the end of the day they are considered to be outsiders. Antony and Mary are victims of “double discrimination”- as mentioned earlier; the caste discrimination that they had to face in Kerala had left them with a slight hope that it would never be repeated in their new home. But to their dismay, they were again subjected to racial discrimination “Antony and Mary have experienced on many occasions that the white had an innate dislike for the non-white whom some might feel intruders into their own country. This racialism was not universal but would raise its ugly head occasionally (84).”

Antony remembers how happily he had once boarded the ship to UK hoping that he would never see colour discrimination but on the other hand “these idiots here have their look and expression as if the world is under their feet (51).” Many a times his white co-workers hate him as they can’t believe that the white master would entrust the store to an Indian. The thought of the presence of discrimination based on skin colour in a developed nation as UK got him disheartened (48). “When human skin is peeled off, there  comes out blood. Its colour is red-neither black nor white…Why colour discrimination in human alone? It is because a crumbled heart and rotten mind make them blind” (50).

This accomplishes the venture to categorize the diaspora experiences of the characters in the novel under Labour Diaspora. This also advances the idea of absence of belongingness in the host land as the characters struggled to carve a niche in their host country- symbolic of Indian diaspora narration. The life of the characters undergoing “double-discrimination” is also mentioned and most importantly a shift in their behaviour from compliant to resistant is discussed in relation to the colonial and post-colonial years of the
India.