Iran Guards vow response to ‘any action’ amid US tensions 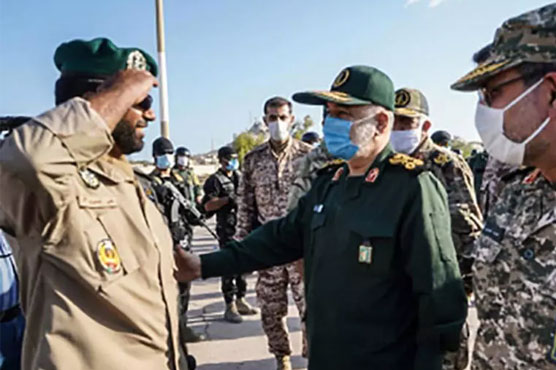 TEHRAN (AFP) – Iran’s Revolutionary Guards chief Hossein Salami vowed Saturday to respond to any “action the enemy takes,” in a visit to a strategic Gulf island, amid rising tensions with the US.

Salami was speaking on the eve of the first anniversary of the US killing of top Iranian military commander Qasem Soleimani in a Baghdad drone strike on January 3, 2020.

“We are here today to evaluate and be assured of our powerful capabilities at sea and against enemies who sometimes boast… and threaten,” Salami said according to the Guards’ official website Sepahnews.

“We would respond with a reciprocal, decisive and strong blow to whatever action the enemy would take against us,” Salami warned.

Abu Musa and the Greater and Lesser Tunb islands are located in the Gulf near the entrance to the strategic Strait of Hormuz, through which a fifth of world oil output passes.

The islands are under Iranian control but are also claimed by the United Arab Emirates.

Tensions have been building up in the run-up to the anniversary of Soleimani’s killing, with two American B-52 bombers recently flying over the region.

Iran’s Foreign Minister Mohammad Javad Zarif on Thursday accused outgoing US President Donald Trump of aiming to fabricate a “pretext for war” after Trump blamed Tehran for a rocket strike on the US embassy in Baghdad on December 20.

The US aircraft carrier USS Nimitz has been patrolling Gulf waters since late November, but American media said this week that the acting US defense secretary, Christopher C. Miller, had ordered the Nimitz to return home.

The New York Times, quoting US officials, said this move was part of a “de-escalatory” signal to Tehran to avoid a conflict in Trump’s last days in office.

Trump unilaterally withdrew the US from a landmark nuclear deal with Iran and world powers in 2018 and launched a “maximum pressure” campaign against Tehran, reimposing and reinforcing crippling sanctions.

The two countries have twice come to the brink of war since June 2019, especially following the killing of Soleimani.

Days after the Soleimani assassination, Iran launched a volley of missiles at Iraqi bases housing US and other coalition troops, with Trump refraining from any further military response.

Tangsiri had last visited the two Tunb islands on December 25 and emphasised the necessity of the troops’ “combat-readiness and awareness,” according to ISNA news agency.