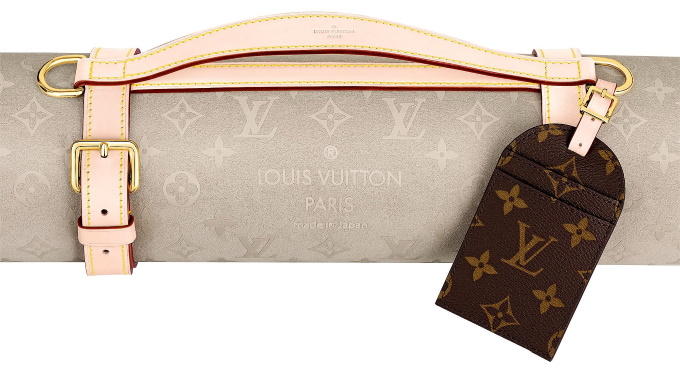 Luxury fashion house Louis Vuitton seems to have withdrawn yoga mat made from cowhide leather from sale on its various country websites after Hindus protested, calling the product “highly inappropriate”.

When searched for “yoga mat” at various Louis Vuitton country websites in Americas, Europe, Asia, Oceania, Middle East; results came out as: “Not Available”, “No results were found for the keyword “yoga mat””, “Information not available”, “Out of stock”, “Unfortunately no further information is available”, etc.

Distinguished Hindu statesman Rajan Zed; who spearheaded the protest and was backed by Christian, Jewish and Buddhist leaders; in a statement in Nevada (USA) today; thanked Louis Vuitton for understanding the concerns of Hindu community, which found such a product quite insensitive.

Adamik, Beyer, Fisher and Zed had pointed out that they were all for the freedom of artistic creativity, entrepreneurship, expression and speech; but faith was something sacred, and attempts at trivializing it hurt the followers.

Zed, who is President of Universal Society of Hinduism, in today’s statement mentioned that they were, however, still waiting for an apology from LVMH CEO Bernard Arnault, Louis Vuitton CEO Michael Burke and Louis Vuitton Executive Vice President Delphine Arnault displaying seriousness about the LVMH vision of “ethical responsibility”. He also urged the company to remove if any of these yoga mats were still available at their brick-and-mortar stores or at resellers’ websites. He also suggested that companies like LVMH should send their senior executives for training in religious and cultural sensitivity.

Rajan Zed had said that this yoga mat seemed ridiculing and offending two serious concepts of Hinduism—cow and yoga—and was hugely insensitive to Hindu feelings.

Scenario of yoga (profound, sacred and ancient discipline; introduced and nourished by Hinduism) being performed on a mat made from a killed cow (the seat of many deities, which was sacred and had long been venerated in Hinduism) was painful to Hindu sentiments; Zed had indicated.

LVMH, whose “Code of Conduct” included “Acting Responsibly and with Social Awareness”; should not be in the business of religious appropriation, sacrilege, mocking serious spiritual practices and ridiculing entire communities; Rajan Zed had noted.

Hinduism was the oldest and third largest religion of the world with about 1.2 billion adherents and a rich philosophical thought and it should not be taken frivolously. Practices/concepts/traditions of any faith, larger or smaller, should not be ridiculed at; Zed had stated.

Yoga, which found reference in world’s oldest extant scripture Rig-Veda and other early Hindu texts, is considered union with God, one of the six systems of Hindu philosophy, and mean for transforming consciousness and purification of the Self and attaining liberation. It involved withdrawal and its objective was the state of blissful liberation, Rajan Zed had pointed out.

Description of this beige mat (priced at $2,390 and made with cowhide leather) previously at the company’s USA website claimed: “Meditative stretching takes on a sleek bent with the Louis Vuitton yoga mat”.

Louis Vuitton, is one of the 75 “houses” of LVMH headquartered in Paris, “a family-run group” which claims “world leader in high-quality products” whose reported sales in 2019 were €53.7 billion. LVMH, whose history goes back to 1593, also claims to be the only group present in all five major sectors of the luxury market:  Wines & Spirits, Fashion & Leather Goods, Perfumes & Cosmetics, Watches & Jewelry and Selective Retailing.