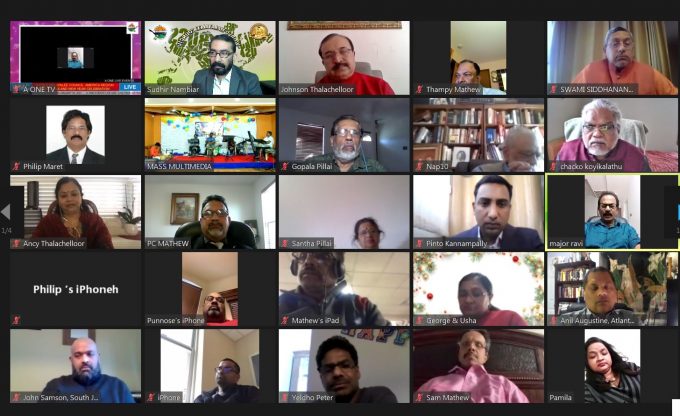 New Jersey: While delivering the inaugural Chief Guest remarks, Honorable Major Ravi avidly extended his hearty appreciations and left nothing unturned in wholeheartedly appreciating the noteworthy goodwill projects rendered by WMC both domestically in the USA and back home in Kerala. The occasion was the “Raga Pournami” – the event last Saturday, organized by the American Region reaching-out to the economically hardpressed artists’ families due to the ongoing pandemic.

Major candidly appreciated the distinction of the deed stating “WMC adapted virtual means in enabling the otherwise travel-denied world, by conducting the event on Zoom platform, thus the diaspora patrons as well the artists could complement each other serving the needy. It is the creative talents that nourish the society with new vibes of energy and the role that the artists contribute is certainly intangible. Imbibed with the information of the socio-political projects undertaken by WMC AR, Major promised his personal reach out assisting WMC globally. The Chief Guest was referring to the Environmental and Civic educational initiatives WMC was successful in rolling out in the recent months. Unless we humans act now affirmatively by getting out of our comfort zones in protecting our Mother Earth, be prepared to face even bitter consequences – referring to the increased inclement weather incidences and scientific data Major Ravi, cautioned the audience! 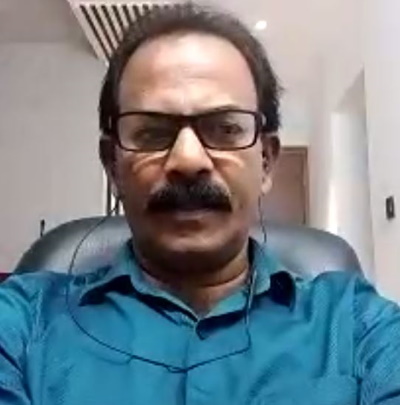 Swami Siddhananda Acharya, of Chinmaya Mission PA, and Rev. Fr. Christy Parambukaattil, Vicar of St. Alphonsa Syro-Malabar Parish, Dallas TX, blessed the event as the Guests of Honor and delivered greetings of Christmas and New Year greetings messages. Dr. Rajive Rajadhani, Chairman Indian AntiCorruption Mission as well graced the occasion as Guest of Honour.
Rev. Fr. Christy, denoted Christmas as the heavenly gift of love from Almighty and the embodiment of the same is the Birth of little baby Jesus in Bethlehem. The Reverend extended his prayers and greetings for a joyous, healthy and prosperous days ahead. “What we see and hear is one and the heavenly merciful Almighty as well is just One” extracting the message sung at the inaugural song Swamiji discoursed in his honorable message. Our physical body is just not ours but is destined and designed heavenly for being tools of selfless-service favoring others; and appreciated WMC for the many impactful projects delivered collectively, helping brethren in need and educating ex-pats on civic and social fronts – envisioned exactly by the founding fathers of the institution!
Dr. Rajive Rajadhani, a practicing High-count attorney and empaneled legal advisor of the esteemed charity home Gandhi Bhavan, Kerala enthusiastically appreciated the good work of WMC Global & AR and announced his unconditional support to the “Pravasi Legal Cell” initiative of WMC Global, intended to provide legit legal assistance for the Kerala diaspora back home.
Dr. Rajadhani recollected and expressed his absolute appreciation on to the esteemed academic projects WMC AR accomplished together with his organization’s partnership, referring to the educational short film WMC AR produced in 2018 in with the title “An Oath for Survival”  https://youtu.be/SE0Kj2b4raMan environmental awareness initiative his students of Sankaramangalam English Medium Highschool, Kaviyoor too were enabled opportunity to participate in, while he was the Principal there. Dr. Rajadhani reminisced the journey to Kerala’s wild rainforests for the filming and the natural encounters with the real-life wild together with the WMC leaders. He was of specific appreciation to the then WMC AR Chairman Mr. P.C. Mathew, and Prof. KP Mathew (coordinator and director, environmentalist, and Novelist) for the extraordinary pain and goodwill extended to the successful completion of the project. Further, Dr. Rajadhani, exerted that without the support, selfless teamwork, and leadership audacity nothing can be accomplished and applauded the WMC AR leaders then and now starting from  Mr. Philip Thomas (Chairman), Mr. Sudhir Nambiar (President), Mr. Pinto C. Kannampally (General Secretary), and Mr. Cecil Cherian (Treasurer) the Cabinet members of the current service term ’22.
“Raga Pournami”, the Christmas and New Year celebration, the first event in the service calendar year, started-off on the WMC traditional format with the Silent Prayer. 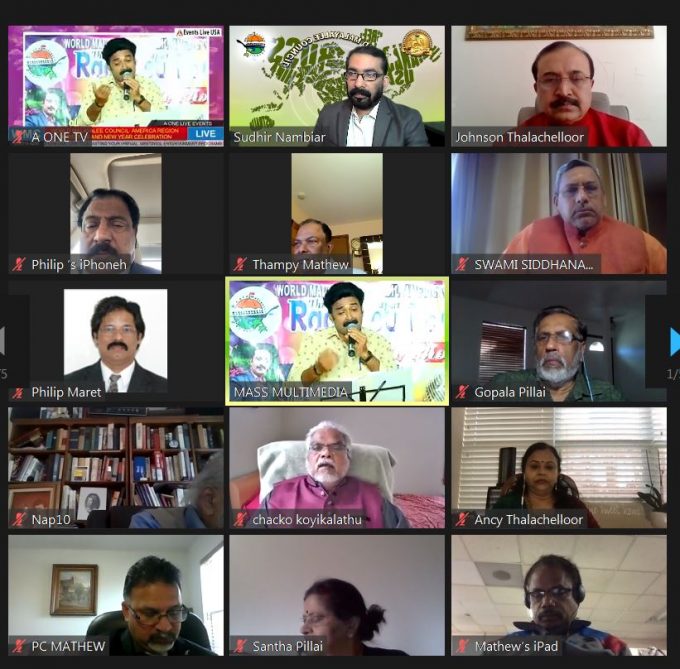 The program intended towards fundraising was ticketed nominally and was successful in exceeding expectations by achieving the targeted amount. The modest but frugal decorations were the highlight of the event. Artists lead by Mr. M. Ajaykumar of Trivandrum was well appreciated with “Once more” demands from the audience, which was heartily obliged.  A One TV Inc was the technical partner of the event and was well acknowledged in broadcasting the event live on the varied SM platforms.
WMC Global Chairman Dr. Ibrahim Haji (Dubai, UAE), Vice-Chairperson Dr. K.G.Vijayalaxmi (India), General Secretary Mr. Gregory Medayil (UK), Vice President Mr. John Mathai (Sharjah, UAE), and Mr. Thomas Arambankudi ( Germany) expressed their contentment, knowing that the event exceeded the set expectations.
For more information on WMC events, initiatives, and statutes pl. visit www.WMCAmerica.org or www.WorldMalayaleeCouncil.org