This is the victory of democracy; Joe Biden enters the White House as the 46th President of the United States 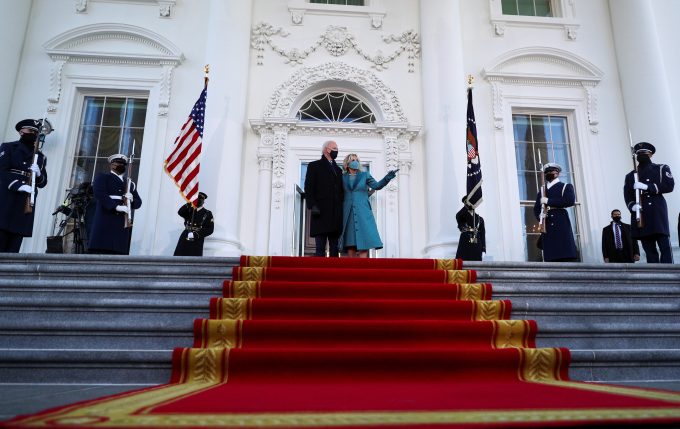 WASHINGTON  – Joe Biden became the 46th president of the United States Wednesday with an upbeat call to end the nation s deep schisms as he immediately erased a slew of Donald Trump s most divisive policies.

Standing on the steps of the US Capitol that was ransacked by pro-Trump mobs exactly two weeks earlier, Biden was sworn in moments after Kamala Harris took the oath as America s first woman vice president.

“Democracy is precious, democracy is fragile and at this hour, my friends, democracy has prevailed,” Biden said before a National Mall that was virtually empty due to the ultra-tight security and a raging Covid-19 pandemic that he vowed to confront immediately.

“We must end this uncivil war that pits red against blue, rural versus urban, conservative versus liberal. We can do this if we open our souls instead of hardening our hearts, if we show a little tolerance and humility and we re willing to stand in the other person s shoes,” he said.

“Together we shall write an American story of hope, not fear, of unity, not division, of light, not darkness. A story of decency and dignity, love and healing and goodness.”

But Trump, who falsely said that he was cheated out of a second term and egged on his supporters before their rampage at the Capitol, broke 152 years of tradition by refusing to attend his successor s inauguration.

Biden pushed through a flurry of orders the moment he entered the White House, starting with rejoining the 2015 Paris climate accord, from which the United States was the sole outlier after a withdrawal by Trump, an ally of the fossil fuel industry.

“We are going to combat climate change in a way we have not done so far,” the new US leader said in the Oval Office as he signed papers to rejoin the Paris deal, which was negotiated by Barack Obama when Biden was his vice president.

Biden also halted the US exit from the World Health Organization, rescinded a ban on visitors from several Muslim-majority nations and halted construction of Trump s cherished wall on the Mexican border.

–  President for all Americans  – 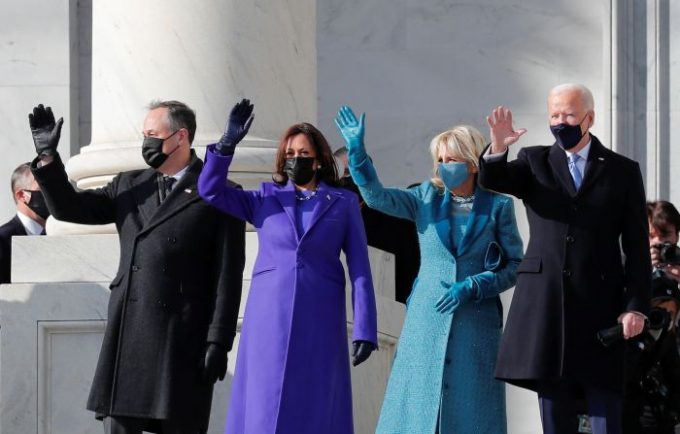 In his inaugural address, Biden appealed to supporters of Trump, who shattered political norms by ruthlessly belittling rivals, denouncing entire ethnic groups and trying to cast doubt on basic facts.

“I will be a president for all Americans,” the veteran Democrat said.

But Biden confronted head-on the rise of domestic extremism, as evidenced during Trump s presidency by the Capitol mob, deadly attacks on synagogues and immigrants, and a violent march by neo-Nazis in Charlottesville, Virginia.

The United States faces “a rise of political extremism, white supremacy, domestic terrorism that we must confront, and we will defeat,” Biden said.

“Our history has been a constant struggle between the American ideal that we are all created equal and the harsh ugly reality that racism, nativism, fear and demonization have long torn us apart.”

At 78, Biden is the oldest-ever US president, a job he first sought in 1987. He is only the second Roman Catholic president after John F Kennedy and swore his oath on a bulging old family Bible.

Harris, the daughter of Indian and Jamaican immigrants, became the highest-ranking woman in US history, and the first Black person and first person of Asian heritage as the nation s number two.

She and her husband Doug Emhoff — America s first-ever “second gentleman” — were escorted to the inauguration by Eugene Goodman, a Black police officer at the Capitol who was seen luring the mostly white mob away from the Senate chambers in a video that went viral.

Central Washington took on the dystopian look of an armed camp, protected by some 25,000 National Guard troops tasked with preventing any repeat of the January 6 violence.

With the public essentially barred from attending due to the pandemic, Biden s audience at the National Mall instead was 200,000 flags planted to represent the absent crowds.

Biden, who has vowed a major escalation in the nation s Covid vaccination drive, warned that the “toughest and deadliest period” was still ahead.

So far, more than 400,000 people have died of Covid in the United States, more than in any other country.

“We must set aside politics and finally face this pandemic as one nation,” he said, striking a new tone after Trump s mockery of mask-wearing and business closings meant to halt the virus.

While the public crowds were gone, Biden brought in celebrity power — absent four years ago with Trump.

Lady Gaga, in a dress with a black bodice and a billowing red skirt, sang the national anthem and Tom Hanks prepared to host a televised evening appearance with the new president.

Jennifer Lopez sang a pop rendition of “This Land is Your Land,” often considered the unofficial US national anthem, ending it by exclaiming the final words of the pledge of allegiance — “one nation, under God, indivisible, with liberty and justice for all” — in Spanish.

The new first lady, Jill Biden, invited a 22-year-old poet, Amanda Gorman, who became a star of the day with verse on how democracy “can never be permanently defeated.”

Biden and Harris started their administration by jointly paying respects to fallen soldiers at Arlington National Cemetery followed by an inaugural parade — devoid of the usual crowds — that featured both an Army fife and drum corps in the red coats of George Washington s time, and a drumline and dancers from Howard University, the historically Black institution that counts the new vice president as a graduate.

Trump left Washington hours before the inauguration, walking on a red carpet on the White House lawn with his wife Melania into the Marine One presidential helicopter, which flew near the inauguration-ready Capitol before heading to Andrews Air Force Base.

“This has been an incredible four years,” Trump told several hundred cheering supporters at a campaign-style event with cannons before leaving for his Florida resort in his last trip on Air Force One.

“We will be back in some form,” vowed Trump, who retains a hold on much of the Republican Party despite being the first president to be impeached twice.

In a first hint of graciousness, Trump wished the next administration “great luck and great success” — without saying Biden s name.

Biden said that Trump left him a traditional letter that was “very generous” but declined to reveal the contents.

Mike Pence, the outgoing vice president who clashed with Trump in his final days by acknowledging he could not overturn the election, attended the inauguration and was spotted laughing with Harris.

Also taking part were former presidents Obama, George W. Bush and Bill Clinton and their wives — including Hillary Clinton, for whom Biden s victory was especially sweet four years after her narrow, surprise defeat to Trump.

In the middle of his last night at the White House, Trump pardoned or commuted the sentences of 73 people including his former campaign chief Steve Bannon, who was charged with defrauding donors who thought they were building Trump s wall.

Trump in a final act lifted a ban on his administration s officials working as lobbyists — an order he had issued at the start of his presidency as he vowed to “drain the swamp” of Washington.