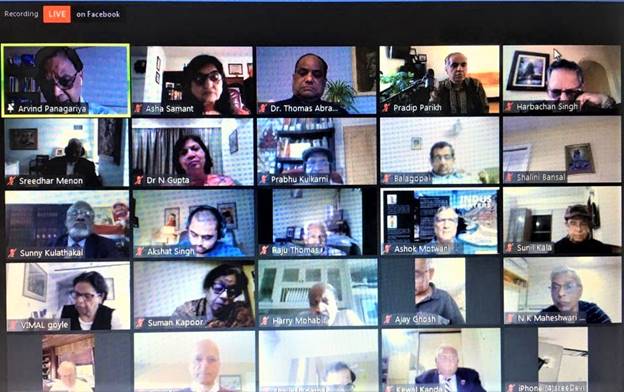 Part of the participants at the talk by Prof. Arvind Panagariya

In an insightful and thought provoking talk and discussion, which was moderated by Dr. Thomas Abraham and Dr. Neerja Arun Gupta, the author of the latest book, “New India – Reclaiming the past Glory,” Dr. Aravind Panagariya shared with the attendees from across the world on ways India can  “regain the lost glory.” The talk and discussion followed by rendering of patriotic songs were part of the India’s 71st Republic Day celebrations on Zoom organized by the Global Organization of People of Indian Origin (GOPIO) on Saturday, January 23rd.

Dr. Thomas Abraham, Chairman of GOPIO International welcomed the participants from all continents, from USA to Australia, to New Zeeland, and provided a brief introduction to the birth and the programs by GOPIO. While pointing to the impact of COVID on human life, he expressed hope that a new beginning with the vaccination rolled out. He showed how with the initiatives from GOPIO, today how PIOs/NRIs have become elected officials across the globe. “The election of Kamala Harris is a pride moment for all Indian Americans,” he said.

In his introduction to Dr. Arvind Panagariya, Dr. Thomas Abraham said, “He is a Professor of Economics and the Jagdish Bhagwati Professor of Indian Political Economy at Columbia University. From January 2015 to August 2017, he served as the first Vice Chairman of the NITI Aayog, Government of India in the rank of a Cabinet Minister.  During these years, he also served as India’s G20 Sherpa and led the Indian teams that negotiated the G20 Communiqués during presidencies of Turkey (2015), China (2016) and Germany (2017).

Taking the audience to the glorious days of India, the scholar said, India accounted for 38% of the total world economy in the first millennium and it continued to grow in the second millennium. In the 17th century, India accounted for 20% of world’s total GDP, with India and China accounting for 50% of total world economy. With the arrival of British rule, India began to lose its place in world with the Western nations growing at a faster pace while India’s economy stayed stagnant. In 1947, when India got Independence from Britain, India’s economy was mere 3% of the total world GDP, he pointed out.

“With a GDP that just reached $2.6 trillion, India is poised to become the world’s third largest economy in less than a decade,” Aravind Panagariya told an audience consisting of people from around the world who had joined together virtually to celebrate India’s Republic Day on Saturday, January 22nd, 2021.

“Now, India is well poised to regain the lost glory,” Panagariya said. During the posy Post-Independence period, India, after initial setbacks and slower growth embarked on a new path with former Prime Minister Narasimha Rao opening up the economy in the early 1990s, giving impetus to growth and sustained investment, Panagariya said. “India’s watershed moment came in1991, when we changed policy, and a New India began to emerge.”

Following in the footsteps of Atal Bihari Vajpayee and Narasimha Rao, Prime Minister Narendra Modi and his government have expanded on the reforms, inviting more investment and brad-based growth, Panagariya said. From a mere 4% annual growth, India has been registering an average 8% growth in the past two decades, which is remarkable, he pointed out.

Acknowledging that “Currently, we have a gloom economy due to COVID,” Pangariya said, while stressing that “Fundamentals of the Indian economy have been robust, though unemployment has taken a huge toll on the growth with India’s growth in the first quarter of 2021 is expected to be negative 3 percent.”

In comparison with several Western and East Asian nations, which have taken several decades to emerge from slow growth to high achievement, India has emerged stronger and vibrant in a much shorter period, he pointed out.

Going forward, Panagariya suggested that “We can do as good as any dictatorial regimes have accomplished” taking into account the several limitations of democracy, catering to diverse needs and demands of the population of India. “We need a work force transformation” Panagariya said, adding that India needs to emerge from the larger agrarian economy to an industrial economy that relies more on technology and infrastructure.

Panagariya said, in his new book, New India: Reclaiming the Lost Glory, he provided the roadmap for India on ways to go forward.

2. Labor reforms have been “almost done” both at the federal and state levels. Currently, the right to terminate workers has been delegated to the states, and now only those companies with over 300 laborers can use the hire and fire policy.

3. Land has largely remained untouched. Urban planning has remained static. Conversion of land from agriculture to industry is the need of the hour.

5. Privatization of several government sectors needs to be implemented for more efficiency.

Panagariya recommended reforms in order to propel growth: Labor and Land, and make the policies more flexible. “Today, 44% of the country’s workforce remains in agriculture and another 42% in small enterprises with fewer than twenty workers. Labor productivity of both sets of workers remains low and they live overwhelmingly on subsistence-level incomes,” he added.  While acknowledging widespread corruption in India, he said, “Digitalization is growing rapidly and the level of corruption has declined.”

“India will bounce back, in the next 12 months. India needs to be more open, and the government needs to reverse the restrictions/protection. “Privatization needs to go beyond some select sectors that have been given OK,” he said.

These steps and many others, “will have moved India one step closer to reclaiming its pre-industrial glory when it accounted for one-sixth of the global output and ranked second in economic size. This rapid movement in the absolute size of the economy will be insufficient, however, to bring prosperity to India’s vast population.”

Panagariya, a preeminent authority on the Indian economy, argues that the creation of good jobs requires the emergence of medium and large enterprises in industry and services, especially labor-intensive sectors such as apparel, footwear, and other light manufactures. He explains that India needs policies conducive to the growth of firms from small to medium, medium to large, and large to larger still. Such policies include greater outward orientation; more flexible land, labor, and capital markets; concerted effort to improve the quality of higher education; faster urbanization; and improved governance at all levels.

Panagariya advocated for a concise strategy to transform India from a primarily rural and agricultural economy to an urban and industrial economy with well-paid jobs for those with limited skills. He said, in his new book, he has provided a data-driven and persuasive roadmap for India to eliminate abject poverty, accelerate economic growth, and return to its historically prominent position in the global economy.

Indian economy can look at better post-COVID decade with a growth rate of 8% as the prospects look better with recovery on track, said Arvind Panagariya, Professor of Economic, Columbia University and Former VC, NITI Aayog. He added that the country will return to pre-COVID GDP growth, which will be significantly higher compared to pre-Covid days.

“India will bounce back, in the next 12 months. India needs to be more open, and the government needs to reverse the restrictions/protection. Privatization needs to go beyond some select sectors that have been given OK,” he said.

“A Perspective of Youth On Modern India” was given by Anjo Theratil. “May the star that was born on 1947, grow stronger and brighter.” Quoting former President of India, Abdul Kalam, he said, “You have to dream before your dream can come true. Do not lose hope but have courage.”

Sunny Kulathakal, President of GOPIO International welcomed the guests from around the world to the celebration of India’s 71st Republic Day. “We may be far away from India, but we cannot take the Indianness from us. The Diaspora community has become a symbol of growth and human achievement as we continue to play a crucial role in India’s development in all possible areas. We have confidence in India as a global power. May this celebration help us, the NRIs to recommit ourselves for the growth of India.” Dr. Asha Samant proposed vote of Thanks.

MC and youth speaker and artists at the Republic Day Celebration segment of the program, from l. to r. Nandita Kotian, Ango Theratil, Pallavi Belwariar, Sreenivas Gunupuru and Pradip Parikh

One can view the recording of the whole program at https://fb.watch/3c9K5KavrE/.

GOPIO is a non-partisan, not-for-profit, secular organization with Individual Life Members and over 100 chapters in 35 countries. GOPIO’s volunteers are committed to enhancing cooperation and communication between NRIs/PIOs and the local communities, building networks, bonds, friendships, alliances, and the camaraderie of citizens and colleagues alike.  GOPIO volunteers believe that when they help network the global Indian community, they facilitate making tomorrow a better world for the Indian Diaspora and the countries they live in.