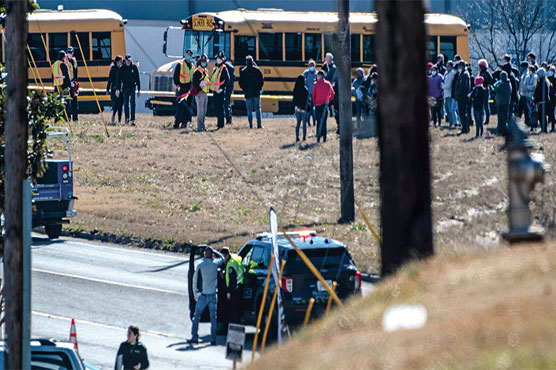 GAINESVILLE  – A liquid nitrogen leak at a food-processing plant killed at least six people and injured another 11 near the southern US city of Atlanta Thursday, police said.

There were “5 fatalities confirmed on the scene” of the leak, police from Gainesville, Georgia told reporters, with health authorities adding that 12 people were transported to a hospital, including one firefighter, all suffering from respiratory injuries.

One of those “was deceased at the hospital,” Zachary Brackett of Hall County Fire Services told reporters.

Three others were in critical care, five were in fair condition and three were able to leave the hospital later in the afternoon, according to regional health official Sean Couch.

The leak did not cause an explosion, and its cause — which is still unknown — remains under investigation, police said.

Investigators hoped to be able to enter the building later in the day, according to sheriff spokesman Derreck Booth.

The accident occurred at 10:00 am (1500 GMT) when a liquid nitrogen line ruptured at a specialized poultry processing plant, Foundation Food Group, located in Hall County in the southeastern US state, according to company vice president Nicholas Ancrum.

“Until the investigation is completed we can t say… how this accident occurred,” said Ancrum, whose company located in Gainesville, Georgia — about 50 miles (80 kilometers) northeast of Atlanta — was until recently known as Prime Pak Foods.

He said 130 employees were evacuated.

A truck driver who saw the incident said “two to three” people “passed out” as they stumbled out of the building, and first responders urged everyone to back away as they were evacuated from the plant.

“Just thinking of families of everyone… that has lost their lives while at work,” he said, giving his name as Jackie R.

“Just goes to show how quick, at the blink of an eye… life can change dramatically.”

Students at nearby schools were temporarily confined to their classrooms as initial reports suggested there had been an explosion.