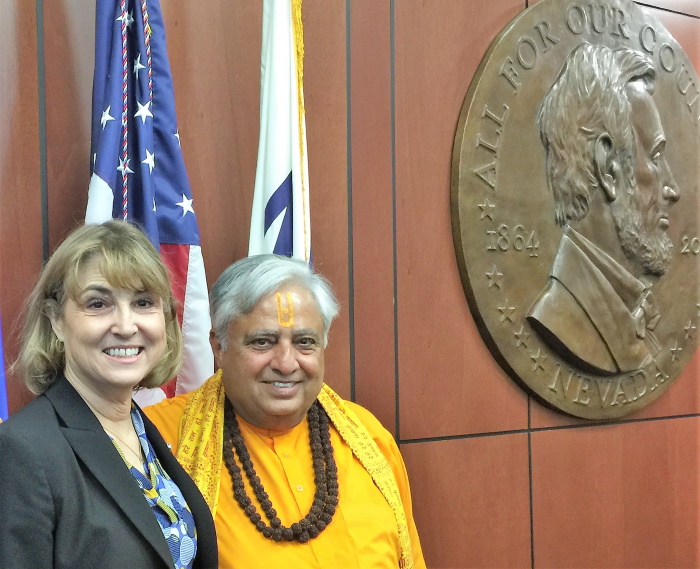 Both Nevada Senate and Assembly in capital Carson City will start their day with ancient Hindu prayers for one whole work-week during current legislative session, containing verses from world’s oldest extant scripture.

Distinguished Hindu statesman Rajan Zed has been scheduled to deliver the daily invocations from ancient Sanskrit scriptures before the Assembly (March 22-26) and Senate (May 03-07). After Sanskrit delivery, he then will read the English interpretation of the prayers. Sanskrit is considered a sacred language in Hinduism and root language of Indo-European languages.

Zed, who is the President of Universal Society of Hinduism, will recite from Rig-Veda, the oldest scripture of the world still in common use; besides lines from Upanishads and Bhagavad-Gita (Song of the Lord), both ancient Hindu scriptures. He plans to start and end the prayers with “Om”, the mystical syllable containing the universe, which in Hinduism is used to introduce and conclude religious work.

Reciting from Brahadaranyakopanishad, Rajan Zed plans to say “Asato ma sad gamaya, Tamaso ma jyotir gamaya, Mrtyor mamrtam gamaya”, which he will then interpret as “Lead us from the unreal to the real, Lead us from darkness to light, and Lead us from death to immortality.” Reading from Bhagavad-Gita, he proposes to urge Senators and Assembly Members to keep the welfare of others always in mind.

In the state of Nevada, Zed has already delivered Hindu invocations at City Councils of Las Vegas, Henderson, North Las Vegas, Sparks, Boulder City and Mesquite; in addition to Board of Commissioners of Clark, Douglas, Lyon, Lincoln counties and Carson City Board of Supervisors. Besides Nevada, he has also read opening prayers in United States Senate, US House of Representatives, various state senates and houses of representatives, county boards and city councils all over USA.

Rajan Zed, a global Hindu and interfaith leader, has been bestowed with World Interfaith Leader Award. Zed is Senior Fellow and Religious Advisor to Foundation for Religious Diplomacy, on the Advisory Board of The Interfaith Peace Project, etc. He has been panelist for “On Faith”, a prestigious interactive conversation on religion produced by The Washington Post; and produces a weekly multi-faith panel “Faith Forum” in a Reno Gazette-Journal for about ten years.