Articles and Stories from Epics and Mythologies 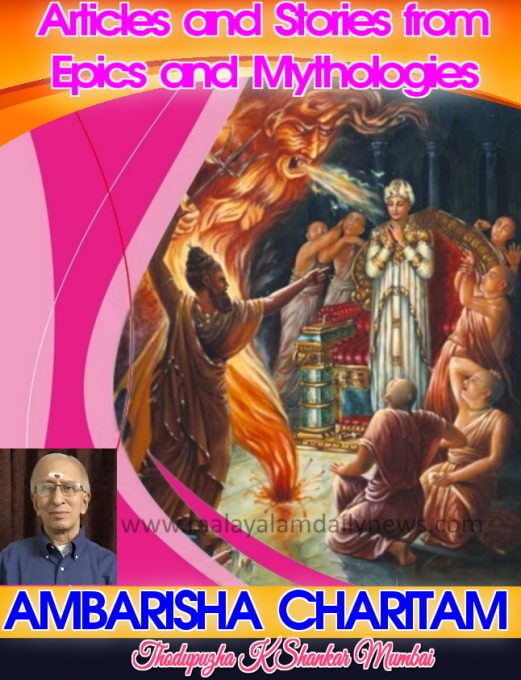 INTRODUCTION:
From the readings and sapthahams and Navahams I attended in Mumbai, I could gather some knowledge which I would like to share with my readers who have always evinced and expressed great interest and inquisitiveness to acquire the knowledge potential. I too strongly believe that the knowledge we gather from books and discourses and even discussions with knowledgeable souls should be shared with others from time to time. Otherwise, it remains futile like the wealth with a miser which is of no use. I am sure these stories and articles which contain good morals will be more helpful particularly, to the younger generation to instil in them a passion for learning our cultural heritage!

Here in these series of articles and stories, I wish to start with some striking stories which I recollect from Bhagavathametc and I wish to begin with:

King Ambarisha was an ardent devotee of Mahavishnu. Once, he wanted to observe DWADASI VRUTHAM, an austere penance observed on the Dwadasi day. As he was continuing it steadfast, Rishi DURVASA came to see the king and the king received him and accorded him a respectful welcome and extended all hospitalities suitably and sent him to Yamuna river to have a lavish bath. Meanwhile, the king continued his penance. He waited for a pretty long time for the sage but, as did not turn up even after waiting for a long time, he took his PARANA(food)finally.

At that time the Rishi returned suddenly and when he learnt that the king had already taken the food before his return, he got very much annoyed and instantly, he plucked a cluster of his hair and strongly hurled on the floor. No sooner he threw, than a monster by name KRUTHYA appeared before the king to eliminate him. The king was greatly embarrassed and frightened and prayed and invoked MAHA VISHNUfor his immediate intervention to save him from this predicament. Lord Mahavishnu took instant action and so HIS CHAKRA appeared on the spot and after killing KRUTHYA, started chasing the Rishi Durvasa. The sage was frightened and approached Brahma and Lord Shiva who refused to help him and with no viable alternative he approached Lord Mahavishnu finally and sought his help as he was being scared away by the CHAKRA.

The sage was very much pleased and the problem between them was amicably solved.

One response to “Articles and Stories from Epics and Mythologies”