Articles and Stories from Epics and Mythologies – Gajendra Moksham 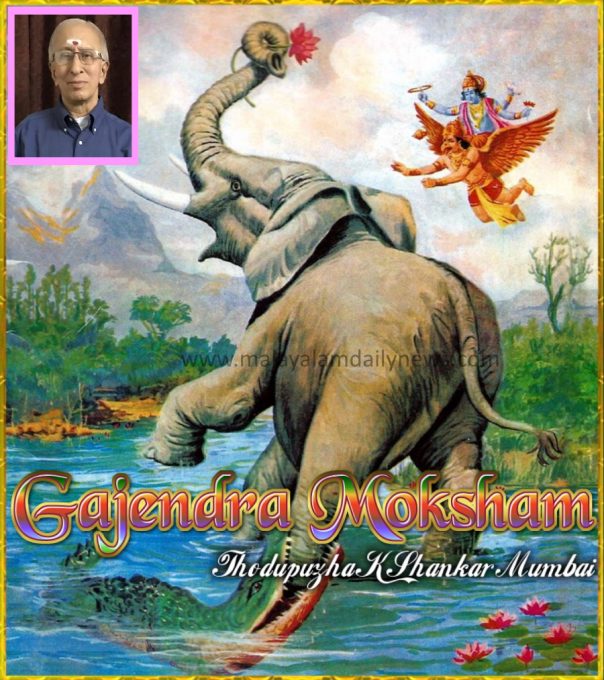 Once upon a time, there was a well-known king by name INDRADUMNAN in the PANDYA RAJYA. He was not only a good ruler, but also an ardent devotee of MAHAVISHNU. One day, while he was deeply engrossed in meditation on Lord Vishnu, the renowned sage AGASTHYA visited him. As he was in profound meditation, he didn’t notice the sage and hence couldn’t accord him any appropriate welcome nor show formal courtesies. This negligence, the sage took it as a serious lapse and laxity on the part of the king and so became very angry and instantly cursed him to be a wild elephant. When he got up from his meditation, his attendants told him the whole story and the king was very much upset and deeply regretted his lapse or indifference. Hence, he went and apologised to the sage and expressed his readiness to do any expiation (prayaschittam) to undo his unawares. The sage also felt sorry, consoled him and advised him to continue with his devotion so that he would get salvation from Lord Vishnu and thus the evil effects of the curse would be rectified in course of time. While walking, the sage thought in soliloquy “Even if he is a saint if arrogance overpowers him, he couldn’t be considered a sage”! He proceeded feeling guilty conscious all the way.

Very shortly, king Indradumnan became a gigantic tusker, GAJENDRA, in the thick forest and moved about freely as the most powerful leader of the herd of whole wild elephants. Previously he was the king of his subjects, but here in the forest also he assumed like a king of the group of elephants.  With the group of wild elephants, he uprooted many big trees and levelled number of small hills and meadows in a fury of synergic excitement. Nevertheless, by virtue of his previous human life, he had the boon of remembering Lord Vishnu and His image reflected in his mind always. There was a beautiful lake -PUSHKARANI- in the centre of the forest wherein blossomed many lotus flowers which Gajendra used to pluck and throw upward and meditate on Vishnu without fail every day. He enjoyed ineffable rapture in the practice of propitiating his beloved God!

Meanwhile, a Gandharva(celestial) by name “HU HU”, who became a huge crocodile due to the curse of a Rishi by name DEVALA, was living in the lake for a long time. The Gandharva had one day pulled the rishi by his legs under the water for a fun, while he was taking his usual morning bath in the lake.  The crocodile was also therefore, longing for redemption or moksha or salvation from the curse.

One day as usual, the tusker, Gajendra went to the lake to pluck some lotus flowers and throw upward for the Lord. He suddenly felt as someone pulling his legs and found it none other than the crocodile. He tried with all his might to shake off the crocodile but couldn’t get rid himself of the crocodile’s grasp, nevertheless, he kept on trying without losing hope. When his own strength couldn’t yield any result, his friends came to his rescue and they too failed miserably. It went on for a thousand year, but the result was zero. Neither he himself nor his friends could do anything. At last, his friends started leaving him one by one and he became all alone, still vigorously pulling back his leg in vain. Meanwhile, he was meditating on Lord Vishnu and reciting His name every now and then. Since he couldn’t consume any food for years together, his health was gradually deteriorating and he became very lean and pale.

Suddenly, Lord Vishnu appeared on his vehicle, the eagle or GARUDA, and the flowers he showered on the Lord fell on His head and he was immensely pleased. He appeared before Gajendra and sent His Chakra which killed the crocodile and liberated Gajendra instantly. He got redemption from the curse and became free for ever. The crocodile also got salvation and bounced back to his Gandharva (a celestial Musician) state simultaneously who prostrated before the Lord, took his blessings and merrily returned to the celestial world. It is believed that Lord Vishnu took king INDRADUMNAN also to SREEVAIKUMNTAM along with HIM!

The moral behind this story is –

1)The sage Agasthya shouldn’t have acted hastily. “Act in a haste and repent at leisure” goes the proverb. It is also interpreted that the king Indradumnan had the air of arrogance of a tusker which he wanted to eliminate by making him an elephant and teaching him that one shouldn’t boast on his might which wouldn’t not help always.

2)One shouldn’t overestimate his strength or expect undue support from anybody. Nobody will remain with us or come to our rescue when we are helpless or in dire need of some help, except GOD and our relentless prayer and devotion alone will help us always!