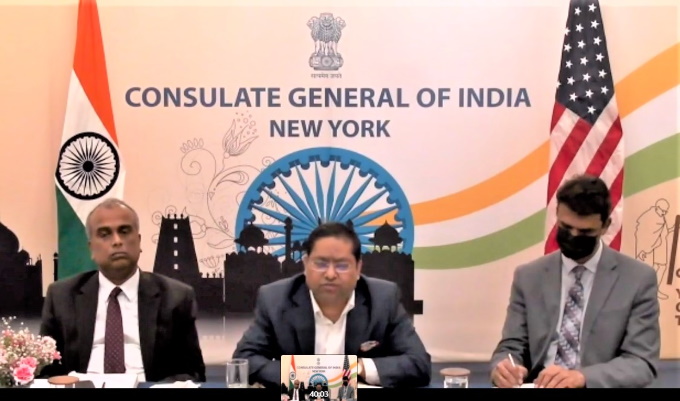 (New York, NY: March 19, 2021) Dismissing concerns expressed and shared on various media platforms of the recent changes to OCI Card Holders made by the government of India, Randhir Kumar Jaiswal, Consul General of India assured an Indian community representative meeting called by the Global Organization of People of Indian Origin (GOPIO) on March 11th, 2021 that there is no major changes that have been announced during the most recent proclamation by the government of India.

Ambassador Jaiswal was addressing an interactive session organized by Global Organization of People of Indian Origin (GOPIO) International, which was attended by all GOPIO chapter and representatives in the North East of the USA, on Thursday, March 11th evening. Ambassador Jaiswal was joined by Deputy Consul General Shatrugna Sinha and other top ranking officials from the Consulate in New York and responded to several concerns expressed by the Indian American community leaders.

In his opening remarks, Dr. Thomas Abraham, Chairman of GOPIO International shared with the audience about the numerous initiatives undertaken by GOPIO in collaboration with the Indian Embassy and Consulates around the nation. Dr. Abraham referred to the emerging US-India Relations and the Role of Indian American community; concerns regarding the consular services, particularly with focus on consular services, traveling to India during Covid times and about the new notifications on OCIs.

Sudha Acharya, Executive Director of South Asian Council for social Services, shared with the Indian officials as to how the pandemic has had a huge toll, particularly on the South Asian community in the New York region, which consists of nearly half of the population that belongs to the South Asian community. Pointing to the works by her organization, as many are ill and many lost health coverage, Acharya said, she and her organization is making all that is possible to deliver groceries to seniors and serving them hot meals.

Neelam Wali at SAHELI urged the community and the Indian officials that they “Need help with legal issues. Financial help, especially when mothers are sent back home and children stranded here.”

Patsy Leopold, representing the Guayana community in the US, said, “We have immigrated from India to Guyana. Now, we have 300,000 of us in the New York region,” and need support and help to support the community in these days of Covid.

Shivender Sofat, President of GOPIO Manhattan pointed to the many issues experienced by NRIs that get being addressed by CG’s office. “We have been working collaboratively on several areas of concerns with the Consulate,” he said. Referring the upcoming Saheed Divas, planned for March 23rd, he said, the newest GOPIO Chapter is planning monthly interactive sessions with CG and community leaders. He is committed to focus on Indian origin students in the NY region and addressing their needs and concerns. Lal Motwani, International Coordinator of GOPIO, invited all participants to attend the Holi celebration by artists from around the world on March 28th. The celebration, co-sponsored by the Indian Consulate, is being organized as an international event.

In his response, Ambassador Jaiswal focused on several issues faced by the Indian America community. On the Indo—US Relationship, the diplomat said, “We have bipartisan support in the Congress. Our relationship continues to flourish and prosper, when either Party in the US is in power.” He referred to Fiver Areas of collaboration and cooperation between the two democracies: 1. Healthcare partnership; 2. Digital strategy; 3. Education and knowledge sharing; 4. Renewal of climate sustainability; and 5. Defense collaboration.

Ambassador Jaiswal declared that “We have vaccinated 27 million people in India, as India vaccinates more than 2 million people daily. India has supplied vaccines to 69 nations, delivering 58 million doses to the nations around the world.

For OCI cardholders, entry fees to be charged for visiting national parks, wildlife sanctuaries, national monuments, historical sites and museums in India and tariffs in airfares in domestic sectors in the country shall be at par with the Indian nationals, the Ministry ordered.

OCI cardholders will also have parity with Non-Resident Indians in the matter of inter-country adoption of Indian children subject to the compliance of the procedure as laid
down by the competent authority for such adoption.

The ministry further said that the OCI cardholders can pursue the professions in India as per the provisions contained in the applicable relevant statutes or Acts as the case maybe, which includes doctors, dentists, nurses and pharmacists, advocates, architects, chartered accountants.

India has specified that an Overseas Citizen of India (OCI) cardholder shall require a special permit for various activities which includes missionary, journalistic activities or to visit any place which falls within the Protected or Restricted or prohibited areas as notified by the Central Government. 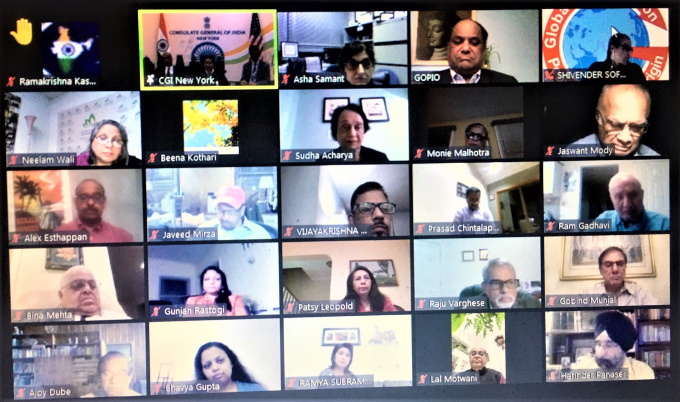 Participants at the GOPIO Interactive Session with the Indian Consulate, New York

On Consular services, the Indian envoy said, as of now, the business visas and the employment visas by India have been restored. However, at this time, Tourist visa stands suspended. Stating that Emergency Visas are being issued, he cautioned that there are some changes being made to the program. “Pre-approval has been done away with,” he said. “Apply for Emergency visa with the documents sent in by mail. For death related reasons, we want you to come straight to the Consulate and will be addressed with the shortest duration with efficient ways emergency visas issued.” He expressed confidence that with covid pandemic declining, travel or tourism visas are expected to be made available soon.

On the much discussed OCIs, Ambassador Jaiswal insisted that “None of the elements in the proclamation is new. All past notifications are put together.” The only new phenomenon is that buying and selling of farmhouses have been added to the list because of its misuse, he pointed out.

On the most contentious issue of the government of India describing OCIs as “foreign nationals” Ambassador Jaiswal said, “You will be treated as NRIs. The new laws do not change your status. If there is any particular concern, please contact us and we will address your concerns.”

Dr. Abraham pointed out that many OCI businesspeople who have established successful business India are concerned about the GOI notification of OCI card holders as foreign nationals. He referred to the new directives for OCIs, asking companies doing technology and other research needing special permission from the government, which is the process, their ideas will get divulged to their competitors.

“I have received several telephone calls and e-mail communications from large number of businessmen that many government agencies are already requiring them to follow the rules as a foreign national, which never happened before. This will have a large adverse effect on investments from OCIs and those who have taken foreign citizenship,” Dr. Abraham added

Ambassador also assured the community that when the pandemic subsides, the Consulate will organize Visa Camps, allowing people to obtain visas from their hometowns.

Deputy Consul General Sinha, while praising the Indian American community said, “The Indian Diaspora is the strongest pillar of India’s outreach to the world. OCIs are in par with Indian citizens. Rules remain the same and not much has changed. Don’t go by the media, and many voce concerns due to misconceived notions.” On the question of visa issues, he assured that “The process has been streamlined with new guidelines. While the Tourist visa is under suspension, Emergency visas are being issued.”

To another question, the Ambassador Jaiswal said, “Rules for foreign nationals will apply to all naturalized citizens in the US.” He reiterated the govern position that RBI permission is needed to buy and sell properties in India. On dual citizenship, he said, “OCI card stays as a connection. No further plan at this time regarding dual citizenship for people of Indian origin.”

“GOPIO and other Indian Community organizations have common interest of achieving better US-India Relations,” Dr. Thomas Abraham said. “GOPIO has had interactive sessions with Indian Consulate and Embassy officials in the past and have discussed contemporary issues which are of concern to Indian American community and the Indian Diaspora at large. GOPIO International and its chapters in the Northeast in cooperation with other community organizations are grateful to Consul General Jaiswal and other Consuls for meeting with the Indian American community leaders today to discuss some of the issues of n interest to the Indian Diaspora community.”

“GOPIO will continue to keep this dialogue with Indian missions around the world,” Dr. Abraham added.

On final note on the new OCI Card notification, Dr. Abraham sad that he had received hundreds of responses from OCI Card holders and those who have taken citizenship in other countries about the hazzle of buying and selling their properties in India.

“India has gained from NRIs and PIOs and therefore Govt, of India must remove that confusion of OCI card holders being termed as foreign nationals and that all those who moved out of India for employment and settled in foreign countries and taken citizenship in other countries must be treated at par with NRIs,” Dr. Abraham concluded.

GOPIO is a non-partisan, not-for-profit, secular organization with Individual Life Members and over 100 chapters in 35 countries. GOPIO’s volunteers are committed to enhancing cooperation and communication between NRIs/PIOs and the local communities, building networks, bonds, friendships, alliances, and the camaraderie of citizens and colleagues alike.  GOPIO volunteers believe that when they help network the global Indian community, they facilitate making tomorrow a better world for the Indian Diaspora and the countries they live in.