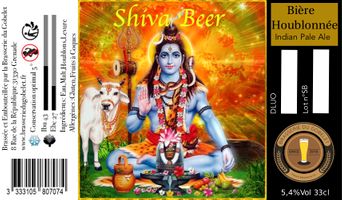 Zed, who is president of Universal Society of Hinduism, indicated that Lord Shiva was highly revered in Hinduism and he was meant to be worshipped in temples or home shrines and not to be used for pushing beer or to adorn beer bottles, etc. Moreover, linking a deity with an alcoholic beverage was very disrespectful, Zed added.

Breweries should not be in the business of religious appropriation, sacrilege, and ridiculing entire communities. It was deeply trivializing of divine Hindu deity to be displayed on a beer bottle, etc.; Rajan Zed emphasized.

Hinduism was the oldest and third largest religion of the world with about 1.2 billion adherents and a rich philosophical thought and it should not be taken frivolously. Symbols of any faith, larger or smaller, should not be mishandled, Zed noted.

In Hinduism, Lord Shiva, along with Lord Brahma and Lord Vishnu, forms the great triad of Hindu deities.

“Shiva beer” (5.4% Vol, IPA) was described as “Hoppy beer”. The Brasserie du Gobelet (Occitanie Craft Beer); created in 2018 and whose tagline is “Taste, enjoy, be delighted!”; claims to produce beers “that are simple, tasty, aromatic …”