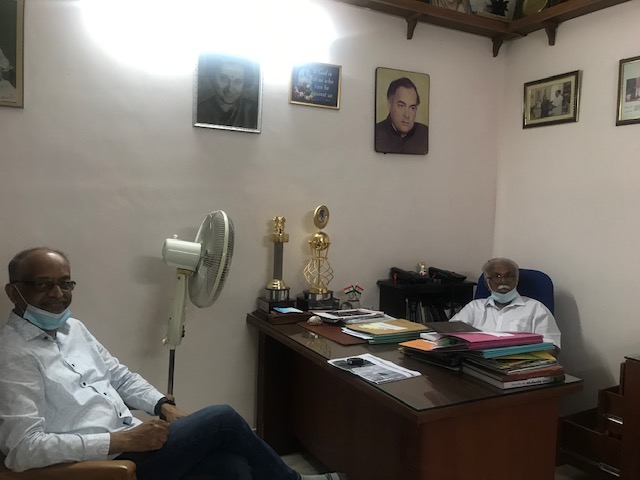 There is no doubt that campaigning is an exhilarating experience not only for the candidates involved but also for those active supporters and participants. I must confess that my experience has not been any different. It also allows one to travel to even the remotest parts of the State and interact with people with different ideologies and perspectives. However, it would be even more heartwarming to sit down with some veteran leaders and exchange views and ideas.

Visiting Professor P. J. Kurien provided such a valuable opportunity. During my trips to Kerala, I have often visited him, and his residence would be teeming with visitors who were there to file their grievances or get some recommendations for their loved ones for jobs or admissions to prestigious institutions, etc. However, this time it was different. Only a few people from the nearby township were seeking his help to set up an ICU bed in a local hospital. I heard him admonishing them about their inability to raise some funds from the well-to-do parishioners. That has become quite a norm as our friends in Kerala are so used to getting money from abroad for any proposed projects. There is so much wealth around in Kerala these days as people are sitting on assets worth in Crores, yet always looking for a handout from Gulf, Europe, or America for any charitable initiatives.

I started my conversation by wishing him a belated happy birthday. After thanking me, he responded in his casual style that he did not care much to celebrate birthdays and said that a reporter from Mathrubhoomi newspaper called him to inquire and subsequently wrote an article which conveyed the news that he was celebrating his 80th birthday. He was born to the couple PaduthoduPallathu P. G. Joseph and Rachelamma on March 31st in 1941. He has won elections to Lok Sabha six times from 1980 through 1999 and has been a Rajya Sabha member from 2005 to 2018.  He was the Deputy Chairman of the Rajya Sabha from 2012 to 2018 and a Central Minister twice during his stint in Delhi. He has handled Industry, Commerce, and Energy portfolios and was the Chief Whip for the Congress party in Lok Sabha twice. His remarkable talents and unique ability to render judgment on issues with an independent mind earned him the praises of friends and foes alike. That might have been the reason why Congress and BJP could agree on his election as the Deputy Chairman of the upper Chamber. Although there were critics who would rail against his rulings at times in favor of a BJP point of order, an objective analysis would show that he has followed the guide regarding how a presiding officer of an elected body with contesting elements should act.  He has done more than a credible job as a Deputy chairman in navigating the choppy waters of partisan politics, often in a heated environment. Nevertheless, I have also noticed him using his power to call in  Ministers in Charge to the well of the house and implore them to discuss the issues with the opposition, especially members from Kerala, towards finding a solution. It is worth remembering that he has rejected any overtures from the BJP to join their ranks and even offers of higher offices stating his commitment to the Nehruvian ideology and Gandhian principles.

One thing that has impressed me most with Professor Kurien is his uncanny ability to debate any issue confronting the nation. He is forthright and would speak his mind, and willing to engage in asserting his point of view. If one takes note, most political leaders, especially in Kerala, tend to pretend that they hear you, often shaking heads, while attending few other matters on the side. One hardly hears any opposing argument or disapproval of expressions as the whole conversation often is a letdown being disingenuous or lacking any seriousness. However, with Professor Kurien, the opposite has always been true, and he could even end up admonishing one for demanding the unworkable or unethical!

Asked about what he felt about the upcoming election and current dynamics, he did not mince his words. He plainly said that there is no Congress party in Kerala other than two groups vying for power. He cited the Election Committee as an example of which he is a member, never held one meeting discussing the candidates. To put it in his own words how the leaders of these groups have made decisions on the candidates, he said the conversation might have gone like this “ you take Konni, I will take Aranmula and so forth, and the people were truly lied to.”

He must have also been expressing his frustration as regards being denied another term in Rajya Sabha, where he would have enjoyed continuing bi-partisan support as the Deputy Chairman. However, one of the missteps might have cost him the Rajya Sabha seat. Once upon weighing the future of the Congress party in Kerala, he stated that Ramesh Chennithala meets the qualification to be the next leader and possibly be the Chief Minister. It is obvious that such a statement was displeasing to the ears of OommenChandy, who was holding the sway for the party at that point in time.

That triggered a new urgency on the part of the one Congress group to vacate Kurien from his perch in Delhi, where he could do more damage to the group’s interest. There started an ambitious plan to deny Kurien the Rajya Sabha seat when his term expires, notwithstanding he was the only leader from the Congress party in Delhi who has a cabinet rank and being an effective liaison with the ruling party. In order to accomplish the feat, almost a  conspiracy was hatched together with Kerala Congress (M) for Jose K. Mani to resign his elected Parliament seat from Kottayam and run as a candidate for the Rajya Sabha seat held by Mr. Kurien.

First of all, there is no moral justification for an elected Lok Sabha member to resign and leave that seat vacant for a year or more without valid reasons such as health or other ethical issues. It is nothing short of a betrayal of the trust people have bestowed in a person. Secondly, if a person is serious about serving the people, why he/she needs to switch positions to do so. The whole idea looks ludicrous, however to some, getting Kurien out was more important to their vested interests than respecting the ethics and norms of the parliamentary democracy. It was also widely reported that Jose K Mani was not crazy about the idea at first but was persuaded to go along in the best interests of the coalition.

The final straw happened when the High Command queried why Prof P.J. Kurien should be denied a seat. The various unconfirmed reports have alleged that the leaders of both groups have joined together on this issue and argued that it was in the best interest of the coalition politics and countered the High Command with a challenge that what choice they would like to have: a Rajya Sabha seat for Kurien or Six Lok Sabha seats with the help of Kerala Congress (M)? HC did not have much of a luxury as they were facing a tough election ahead where every seat would count if they had to unseat Mr. Narendra Modi from his office as the Prime Minister. However, today, one can witness the charred remains of this disastrous policymaking everywhere as Jose K Mani not only resigned once again from Rajya Sabha but abandoned the UDF for greener pastures leaving our smart strategists holding the bag.

For Kurien, he could foresee the premature ending of an illustrated political career and, to some in the Congress hierarchy, the glee to see a mission accomplished. It is another proof that there is no lasting friendship or lasting enmity in politics: only lasting interests! It may not be mere former allies, but people whom one has gone out and batted for may not be there in times of need. Politics is a ruthless game, and some people have appeared to have perfected the Chanakya Thantram to its finest.

For Prof. Kurien, there is nothing truly to regret about. He has scaled the heights of power and privilege and should be grateful to the Congress party for the opportunity. When I met him, he was indeed in a retirement mode, however not at all idle. His latest effort in using his influence to equip nearby hospitals with Dialysis Units and providing needy children with online facilities is bearing fruits under the auspices of the Rajiv Gandhi goodwill charitable trust.

He honestly believed that UDF would come back to power as his warrior spirit was still evident as he traveled around and battled for the UDF candidates in nearby constituencies.Happy 80th, Professor Kurien. Welcome back to life in God’s own country.

One response to “Few Reflections of Professor P. J. Kurien@80”