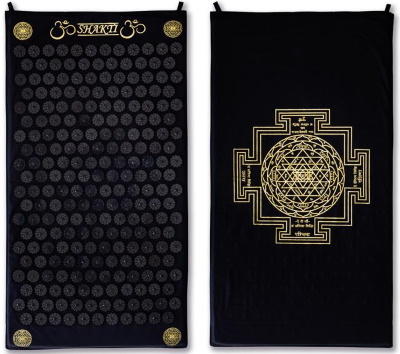 Jonathan Heslop, Director at Shakti Mats, in an email to distinguished Hindu statesman Rajan Zed, wrote:… our company has been made aware that the Om symbol and Yantra which appears on our Shakti Acupressure Mats, may cause offence…we have agreed with our suppliers to remove the Indian Holy symbol Om and the Yantra from our future production…I apologise for any offense that we have caused.

Zed, who is President of Universal Society of Hinduism, in a statement in Nevada (USA) today, thanked Shakti Mats and Heslop for understanding the concerns of Hindu community, which felt that such a product was insensitive.

Zed had said that both “Om” and “Yantra” were greatly revered icons in Hinduism and it was highly trivializing and disrespectful to lie/sit/stand/tread/walk on these. Inappropriate usage of sacred Hindu concepts or symbols or icons or deities for commercial or other agenda was not okay as it hurt the devotees.

Mat companies should not be in the business of religious appropriation, sacrilege, and ridiculing entire communities. It was deeply trivializing of immensely venerated Hindu icons to be displayed on a mat, Rajan Zed had emphasized.

Hinduism was the oldest and third largest religion of the world with about 1.2 billion adherents and a rich philosophical thought and it should not be taken frivolously. Symbols of any faith, larger or smaller, should not be mishandled, Zed had noted.

Rajan Zed had stated that Hindus were for free artistic expression and speech as much as anybody else if not more. But faith was something sacred and attempts at trivializing it hurt the followers, Zed added.

Zed had pointed out: In Hinduism, “Om”, the mystical syllable containing the universe, is used to introduce and conclude religious work. Usually considered the most powerful mantra, “Om” has been equated with brahman, isvara, atman, etc.

Ancient “Yantra”, visual equivalent of mantra, which represented the Goddess and the cosmos, is a serious and sacred symbol/concept used for Hindu liturgy and meditation; and is installed in many Hindu temples. Its intersecting triangles represent Siva and Sakti, and many times it is meditated upon as a deity; Rajan Zed had indicated.

Shakti Mats, whose tagline is “Meet Your Personal Masseuse”, sells acupressure mats (describing those as “a daily self-care tool based on the Indian bed of nails”) and accessories. Each mat has 4,000 to 8,000 spikes and priced at $69. Besides seemingly selling on its country-specific websites— New Zealand, Australia, USA-Asia, Europe, United Kingdom—it sells over Amazon and at various retailers in Auckland, Christchurch, Wellington, Hamilton, Tauranga, Dunedin, Whangarei, Invercargill, etc. George and Jon are the founders.