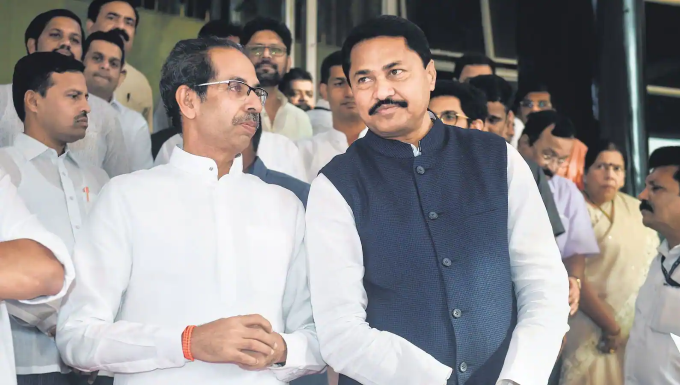 Mumbai:  Differences have started coming to the fore even before the completion of two years of the Maha Vikas Aghadi government of NCP-Shiv Sena-Congress in Maharashtra. While local Congress leaders are talking about fighting alone in the upcoming elections, Chief Minister Uddhav Thackeray said that people going to the polls alone will be beaten with slippers. However, NCP is refraining from speaking anything clearly on this matter.

In fact, on Saturday, Maharashtra Congress President Nana Patole had said in Amravati that in the year 2024 elections, Congress will emerge as the single largest party in the state and only Congress ideology can save the country.

After this, senior Congress leader Naseem Khan said that if his party contests alone, it will benefit.

Earlier, Mumbai Congress chief Bhai Jagtap had said that he was ready to contest the Mumbai civic polls next year without tying up with the Sena, according to Hindustan Times .

Shiv Sena chief and Chief Minister Uddhav Thackeray gave a very sharp reaction to this. Addressing Shiv Sena workers on the party’s 55th foundation day, without mentioning Congress or Patole, he said, “If we will not give solutions to people’s problems but talk about going alone in politics, people will beat us with shoes.” They will not listen to our party-centric, ambitious talk of contesting elections alone.

According to the report of India Today , Uddhav said, ‘Some people are giving slogans to go alone. I even say that we can go alone. Everyone has the right to do so. It should not be limited to just contesting elections.

He further said, ‘We have a federal structure. Whenever regional pride is threatened, the federal structure comes under pressure. West Bengal is an example of what ‘going alone’ is. After the elections, there were all kinds of attacks in Bengal, but all were in favor of Bengali pride. Bengal has shown an example of how regional pride is protected.

Are there plans to hold mid-term polls: Shiv Sena

At the same time, in an editorial published in the party mouthpiece ‘Saamana’, Shiv Sena also said that since all the major political parties have started talking of contesting elections alone, Shiv Sena and NCP should fight the next elections together in the interest of Maharashtra. Will happen.

The Shiv Sena said the Congress is an important constituent in the Maha Vikas Aghadi (MVA) government but it is at the third position. He said, “Maharashtra Congress chief Nana Patole announced that his party will fight the next assembly elections on its own and also conveyed the Chief Minister for Congress. He also said that he himself will be the next face of the chief minister’s post if the party gives permission. Patole will not die in 2024 without making the Congress chief minister in Maharashtra.

“However, Deputy Chief Minister (NCP leader) Ajit Pawar has said that whoever has the support of 145 MLAs will form the next government and he will decide the chief minister,” Shiv Sena said. His statement is also true. Parliamentary democracy is dependent on gathering majority figures. Whoever succeeds will sit in power.

The Uddhav Thackeray-led party said there is nothing wrong in pursuing political aspirations but it takes numbers to fulfill them. Before the last assembly elections, BJP leader Devendra Fadnavis had said that he would return to power but he could not do so. Despite the BJP winning 105 seats, three other parties (Shiv Sena, NCP and Congress) formed a coalition government.

He said that Patole has talked about contesting the elections alone to boost the morale of the party workers. Soon after Patole’s statement, BJP leader Raosaheb Danve announced that his party would also contest the next election on its own and that a BJP-Shiv Sena alliance was impossible.

Shiv Sena also said that there is no party in Maharashtra that will go with the BJP and hence it is true that it will have to contest the elections alone.

He asked, ‘The Lok Sabha and Vidhan Sabha of 2024 are still far away but the major political parties (BJP and Congress) are suddenly talking of contesting the elections alone. Is there any plan to hold mid-term elections?’

The party said that the state is facing a new crisis every day. Some evil forces in politics are eyeing it to weaken the state politically and financially.

The alliance is for five years, there is no permanent alliance: Nana Patole

Responding to Uddhav Thackeray’s remarks, Patole said the MVA coalition government of Shiv Sena, NCP and Congress was formed in the state for five years and it is not a permanent alliance.

Patole told reporters here that there was no clarity in Thackeray’s statement as to whom he was talking about. He said that even the BJP talks of contesting elections alone.

Patole said, ‘We had formed the Maha Vikas Aghadi (MVA) government in 2019 for five years to stop the BJP. This is not a permanent alliance. Every party has the right to strengthen its organization and Congress has always given priority to providing relief by providing blood, oxygen and plasma to the Kovid-19 affected people at many places.

Patole said that Thackeray made the above remarks on the 55th foundation day of Shiv Sena as party president and not as chief minister.

No time to talk about going in elections alone: ​​Maharashtra Congress in-charge

According to Hindustan Times , state in-charge and All India Congress Committee (AICC) secretary HK Patil on Saturday took a cautious stand on the statements of state leaders going alone in the elections, saying that the decision on the alliance will be taken by the party leadership.

He said that this is not the right time to talk about going alone and a decision will be taken before the elections.

Reacting to Patil’s remarks, Shiv Sena Rajya Sabha member Sanjay Raut on Sunday said that his party has always fought all battles single-handedly for the glory of Maharashtra and the party’s strength.

He said, ‘The way forward for Shiv Sena is clear. The rest of the leaders should come out of the confusion because a leader of a party talks about fighting alone, then another leader of the same party says that this is not the stand of our party.

United on the issue of running the government but no decision on contesting the upcoming elections together: NCP

The Nationalist Congress Party (NCP) on Sunday said that the three constituents of the Maha Vikas Aghadi (MVA) are united on the issue of running the Maharashtra government but a decision has not yet been taken on contesting the 2024 state assembly and Lok Sabha elections together.

NCP spokesperson and minister in Maharashtra government Nawab Malik made this remark a day after state Congress president Nana Patole’s statement that Congress would emerge as the single largest party in the next assembly elections.

It is noteworthy that after the 2019 assembly elections, the MVA government was formed under the leadership of Shiv Sena, in which NCP and Congress are partners.

Talking to reporters, Malik said that the MVA has been formed on the basis of Common Minimum Program (CMP) and has taken many decisions in public interest. He claimed that the common man is satisfied with the performance of the government, whether it is the issue of farmers or the management of the Kovid-19 epidemic.

Malik said, “State Congress President Nana Patole said that his party will fight the next election alone. He aspires to become the Chief Minister. No one can stop anyone from wanting any position. Every party has to work to boost the morale of its workers and strengthen the organization.

Malik said, “The three parties in the government are working unitedly for the welfare of the people and till now it has not been decided how the 2024 elections will be fought.”

Maharashtra Deputy Chief Minister Ajit Pawar had said that the ruling MVA alliance will work under the leadership of Chief Minister Uddhav Thackeray and it is the only “formula” for the top post at present.

Journalists here asked him about Maharashtra Congress President Nana Patole’s recent alleged remarks in which he had expressed his desire to contest elections alone and be his own face for chief minister’s post with the consent of the party high command.

“At present there is only one kind of formula that everyone will work under the leadership of Chief Minister Uddhav Thackeray,” Pawar said.

The NCP leader said that the majority in the assembly decides who will be the chief minister. If Nana Patole has expressed his desire for the post of Chief Minister, it is his right to express it. He expressed this wish because he felt that way.

Pawar said in a democracy one has to eventually achieve the magic figure of 145 seats in the state assembly (in the 288-member assembly) to become the chief minister. Whoever receives it can claim the chief minister’s post.