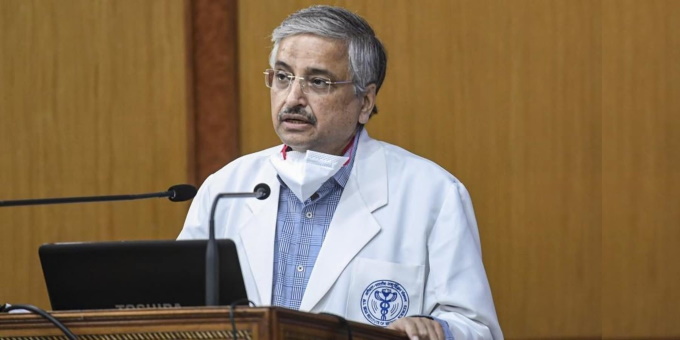 New Delhi: Director of the All India Institute of Medical Sciences (AIIMS) in the national capital, Randeep Guleria, on Saturday warned that if the COVID-appropriate behavior is not followed and overcrowding is not prevented, the next six to eight weeks will lead to the next outbreak of the viral infection. The wave can knock in the country.

Guleria said that till a large number of the population is vaccinated, there is a need to aggressively follow the COVID-appropriate behavior. He emphasized the need for strict monitoring and region-specific lockdown in case of a large increase in the cases of infection.

Guleria reiterated that so far there is no evidence that children will be more affected in the next wave of infections.

Earlier epidemiologists in India had indicated that a third wave of COVID-19 was inevitable and expected to start from September-October.

India was badly hit by the second wave of the Kovid-19 pandemic in April and May, in which a large number of lives were lost every day and the crisis was exacerbated by the lack of oxygen supply in various hospitals.

However, now there has been a decline in the number of infection cases and the infection rate has also been decreasing for the last several days. The daily cases of Kovid-19, which had increased to about four lakhs, have now come down to around 60,000.

Guleria said, ‘If Kovid-appropriate behavior is not followed, then the third wave can come in six to eight weeks. We need to work aggressively to prevent another big wave until we get vaccinated.

He said that there is a need for aggressive surveillance in Kovid hotspots and lockdown due to high increase in cases of infection.

He said that whenever there is a significant increase in cases in a particular area and the infection rate is more than 5 percent, area specific lockdown and containment measures should be implemented.

He said, ‘However, keeping in mind the economic activities, a national level lockdown (to contain the epidemic) cannot be the solution.’

According to the data released by the Union Health Ministry on Sunday, less than 60,000 new cases of corona virus infection were registered in India after 81 days, taking the total number of infection cases to 29,881,965. With this, now the number of patients under treatment ie active cases has come down to 729,243.

According to the ministry, 58,419 new cases of infection have been reported in a day or 24 hours. In this period, the death toll has increased to 386,713 due to the loss of 1,576 more people due to the epidemic. New cases of death are the lowest in 63 days.

According to the data released till 8 am on Sunday, the number of patients under treatment in the country has come down to 729,243, which is 2.44 percent of the total cases of infection. The national rate of people recovering from Kovid-19 is 96.27 percent. In the last 24 hours, 30,776 people have become infection free.