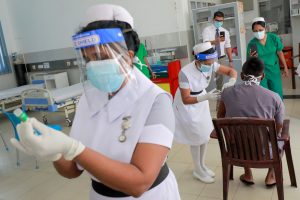 New Delhi: After the arrival of 42,909 new cases of Covid-19 in a day in India, the total number of infection cases increased to 3,27,37,939. At the same time, an increase in the number of patients under treatment was recorded for the sixth consecutive day.

According to the updated data released by the Union Health Ministry at 8 am on Monday, the death toll rose to 4,38,210 after 380 more people died of the infection in the last 24 hours.

According to the data released by Johns Hopkins University of America , meanwhile, the total cases of corona virus infection in the whole world have increased to 21,64,17,479 and so far 45,01,081 people have lost their lives.

The number of active cases in India has increased to 3,76,324, which is 1.15 percent of the total cases. A total increase of 7,766 has been registered in the number of patients under treatment in the last 24 hours. The national rate of recovery of patients is 97.51 percent.

A total of 63.43 crore doses of anti-Covid-19 vaccines have been given in the country till Thursday morning.

According to the data, out of 380 people who died due to infection in the last 24 hours in the country, 131 were from Maharashtra and 75 from Kerala.

The Health Ministry said that out of those who have died so far, more than 70 percent of the patients also had other diseases.