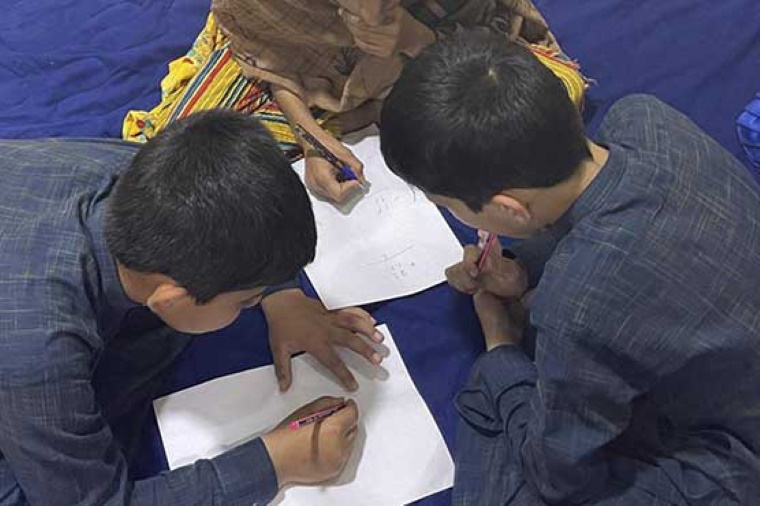 Every night in yet another house in Afghanistan’s capital, a U.S. green card-holding couple from California take turns sleeping, with one always awake to watch over their three young children so they can flee if they hear the footsteps of the Taliban.

They’ve moved seven times in two weeks, relying on relatives to take them in and feed them. Their days are an uncomfortable mix of fear and boredom, restricted to a couple of rooms where they read, watch TV and play “The Telephone Game” in which they whisper secrets and pass them on, a diversion for the children that has the added benefit of keeping them quiet.

All of it goes on during the agonizing wait for a call from anybody who can help them get out. A U.S. State Department official contacted them several days ago to tell them they were being assigned a case worker, but they haven’t heard a word since. They tried and failed to get on a flight and now are talking to an international rescue organization.

“We are scared and keep hiding ourselves more and more,” the mother said in a text message to The Associated Press. “Whenever we feel breathless, I pray.”

Through messages, emails and phone conversations with loved ones and rescue groups, AP has pieced together what day-to-day life has been like for some of those left behind after the U.S. military’s chaotic withdrawal — that includes U.S. citizens, permanent U.S. resident green-card holders and visa applicants who aided U.S. troops during the 20-year war.

Those contacted by AP — who are not being identified for their own safety — described a fearful, furtive existence of hiding in houses for weeks, keeping the lights off at night, moving from place to place, and donning baggy clothing and burqas to avoid detection if they absolutely must venture out.

All say they are scared the ruling Taliban will find them, throw them in jail, perhaps even kill them because they are Americans or had worked for the U.S. government. And they are concerned that the Biden administration’s promised efforts to get them out have stalled.

When the phone rang in an apartment in Kabul a few weeks ago, the U.S. green card holder who answered — a truck driver from Texas visiting family — was hopeful it was the U.S. State Department finally responding to his pleas to get him and his parents on a flight out.

Instead, it was the Taliban.

“We won’t hurt you. Let’s meet. Nothing will happen,” the caller said, according to the truck driver’s brother, who lives with him in Texas and spoke to him afterwards. The call included a few ominous words: “We know where you are.”

That was enough to send the man fleeing from the Kabul apartment where he had been staying with his mother, his two teenage brothers and his father, who was in particular danger because he had worked for years for a U.S. contractor overseeing security guards.

“They are hopeless,” said the brother in Texas. “They think, ’We’re stuck in the apartment and no one is here to help us.′ They’ve been left behind.”

U.S. Secretary of State Antony Blinken told Congress this past week that the government does not track U.S. permanent residents with green cards in Afghanistan but he estimates several thousand remain in the country, along with about 100 U.S. citizens. He promised the U.S. government was working to get them out.

As of Tuesday, 36 American citizens had been evacuated and 24 green card holders since the U.S. military left last month, according to the State Department. More were flown out Friday but the administration did not release those figures.

Neither the U.S. nor the Taliban have offered a clear explanation why so few have been evacuated.

That is hardly encouraging to another green card holder from Texas, a grandmother who recently watched from a rooftop as militants pulled up in a half-dozen police cars and Humvees to take over the house across the street.

“The Taliban. The Taliban,” she whispered into the phone to her American son in a Dallas suburb, a conversation the woman recounted to the AP. “The women and kids are screaming. They’re dragging the men to the cars.”

She and her husband, who came to Kabul several months ago to visit relatives, are now terrified that the Taliban will not only uncover their American ties but those of their son back in Texas, who had worked for a U.S. military contractor for years.

Her son, who is also not being named, says he called U.S. embassy officials in Kabul several times before it shut down, filled out all the necessary paperwork, and even enlisted the help of a veteran’s group and members of Congress.

He doesn’t know what more he can do.

“Nothing is going to happen,” replied the son.

Asked in a recent interview if he believed that, the son shot back, exasperated, “What else am I supposed to tell her?”

The Taliban government has promised to let Americans and Afghans with proper travel documents leave the country and to not retaliate against those who helped the United States. But U.N. human rights chief Michelle Bachelet said there is evidence they are not keeping their word. She warned Monday that the country had entered a “new and perilous phase,” and cited credible reports of reprisal killings of Afghan military members and allegations of the Taliban hunting house-to-house for former government officials and people who cooperated with U.S. military and U.S. companies.

AP reporters in Afghanistan are not aware of any U.S. citizens or green card holders being picked up or arrested by the Taliban. But they have confirmed that several Afghans who worked for the previous government and military were taken in for questioning recently and released.

The California family, which includes a 9-year-old girl and two boys, ages 8 and 6, say they have been on the run for the past two weeks after the Taliban knocked on the door of their relative’s apartment asking about the Americans staying there.

The family moved to Sacramento four years ago after the mother got a special immigrant visa because she worked for U.S.-funded projects in Kabul promoting women’s rights. Now, the mother says both she and her daughter have been wearing burqas each time they move to their next “prison-home.”

The father, who worked as an Uber driver, has been having panic attacks as they wait for help.

“I don’t see the U.S. government stepping in and getting them out anytime soon,” said the children’s elementary school principal, Nate McGill, who has been exchanging daily texts with the family.

Their daughter hopes to become a doctor someday, while their sons say they want to become teachers.

But distraction is not always enough. After a relative told the daughter that the Taliban were taking away small girls, she hid in a room and refused to come out until her dad puffed himself up and said he could beat the Taliban, making her laugh.

The mother smiled, hiding her fear from her daughter, but later texted her principal. “This life is almost half-death.” (AP)