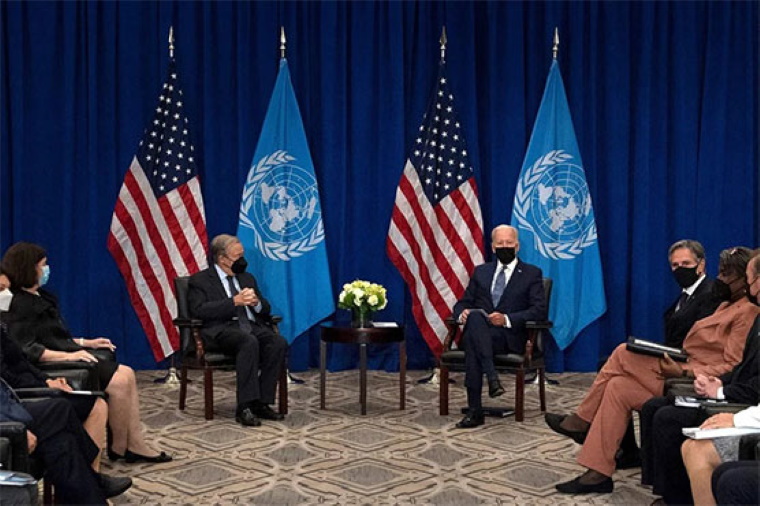 UNITED NATIONS  – US President Joe Biden is expected to announce “good news” on addressing a shortfall in a US$100 billion global climate fund, a United Nations official said on Monday following a closed-door meeting between countries on the sidelines of the general assembly.

Biden, who will make his first speech to the world body as the American leader on Tuesday, was represented by his climate envoy John Kerry at the meeting convened by Britain and UN chief Antonio Guterres.

Ahead of the Paris agreement, developed countries pledged to mobilise US$100 billion a year from 2020 to support poorer nations with climate adaptation, but there is currently around a US$20 billion shortfall.

“We don t have the details, of course, but hopefully it will help to provide that clarity on how the US intends to step up to support the mobilisation of the US$100 billion.”

The announcement was a sliver of hope on the climate front following a slew of recent scientific reports painting a bleak picture of the planet s future, as the world s top polluters continue to spew greenhouse gases at alarming rates.

Britain s Prime Minister Boris Johnson, who co-hosted the meeting, took leaders to task over their failure to honour their pledges for the fund, which is meant to deliver US$100 billion every year from 2020 to 2025.

“Everyone nods and we all agree that  something must be done, ” said Johnson, whose country will host the all-critical COP26 climate summit in Glasgow in November.

“Yet I confess I m increasingly frustrated that the something to which many of you have committed is nowhere near enough,” he added, in remarks shared by his office.

Last week, the OECD confirmed that only US$79.6 billion was mobilised in 2019.

“We heard from some of the industrialised countries … the faint signs of progress,” Johnson told reporters after the meeting, mentioning Sweden and Denmark.

Both countries have announced they would allocate 50 per cent or more of their climate financing for adaptation in the developing world, another key UN goal.

“Let s see what the president of the United States has to say tomorrow,” he added, hinting at the news to come.

Britain for its part trumpeted its US$15 billion climate finance pledges over the next five years, and announced on Monday that US$750 million of that would be allocated to supporting developing countries to meet net zero targets and end the use of coal.

“We re the guys who created the problem – the industrial revolution started more or less in our country,” said Johnson.

“So of course I understand the feelings of injustice in the developing world … But I say to them, that s why we ve got to get the funding to help you to make the progress that you need.”

The meeting came days after Guterres warned the world was on a “catastrophic” path to 2.7 degrees Celsius heating, after the latest bombshell report by UN scientists unveiled last week.

The figure would shatter the temperature targets of the Paris climate agreement, which aimed for warming well below 2 degrees Celsius and preferably capped at 1.5 degrees Celsius above pre-industrial levels.

Guterres told reporters he called the conference with Johnson as “a wake-up call to instil a sense of urgency on the dire state of the climate process ahead of COP26”.

While recognising “developing countries need to take the lead”, the secretary-general also called on “several emerging economies” to “go the extra mile”.

This is taken to mean the likes of China, India, Brazil, Russia, Indonesia and South Africa.

The Paris agreement calls for net zero emissions by 2050, with strong reductions by 2030, to meet the 1.5C goal.

With only 1.1 degrees Celsius of warming so far, the world has seen a torrent of deadly weather disasters intensified by climate change in recent months, from asphalt-melting heat waves to flash floods and untameable wildfires. (AFP)