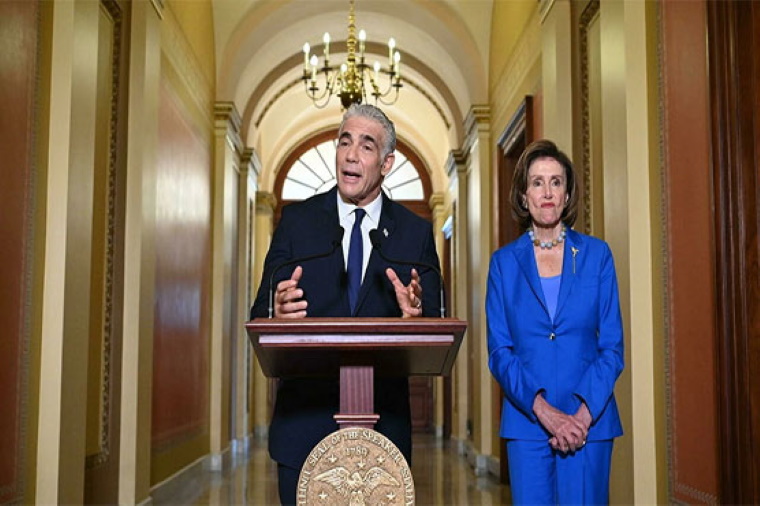 WASHINGTON – The top diplomats from Israel and the United Arab Emirates are set to hold three-way talks in Washington Wednesday as President Joe Biden s administration embraces and looks to expand a normalization drive.

Concerns about Iran — the specter of which helped bring together Israel and Gulf states when they established relations last year as part of the Abraham Accords — are expected to be high on the agenda after Biden s early diplomatic overtures to Tehran bore little immediate fruit.

Former president Donald Trump considered the so-called Abraham Accords to be a crowning achievement for his administration as the United Arab Emirates, followed shortly afterward by Bahrain and Morocco, became the first Arab states to normalize relations with Israel in decades.

Despite their myriad policy differences, the Biden team has given credit to the Trump administration over the Abraham Accords, dismissing criticism that normalization ignores the plight of the Palestinians.

Trump s approach was also seen as transactional as he agreed to sell state-of-the-art fighter-jets to the UAE and recognize Morocco s controversial claim over Western Sahara — moves that Biden has not changed.

A senior State Department official said that the Abraham Accords can “help to achieve a more peaceful and prosperous Middle East.”

“It s not a substitute to a two-state solution. We hope that normalization can be leveraged to advance progress on the Israeli-Palestinian track,” the official told reporters on condition of anonymity.

He said the three nations will announce working groups to expand cooperation on energy and water — a scarce resource in the Middle East — as well as religious coexistence.

Both Israel and the United Arab Emirates have boasted of dividends since signing their accord in the presence of Trump at the White House in September 2020.

Israel has made progress in its long-term goal of ending its isolation in its near neighborhood, while the United Arab Emirates has voiced hope at $1 trillion in new economic activity over the next decade through trade.

The US official said the Biden administration was “actively working to expand” normalization but declined to give specifics.

Sudan, under heavy arm-twisting from Trump, said last year it would seek relations with Israel but has balked amid heavy pressure on the country s fragile new civilian-backed government.

Trump is not the only leader to exit since the Abraham Accords were signed. Israel s veteran former right-wing prime minister, Benjamin Netanyahu, lost power despite the signature international win.

Lapid, a centrist who crafted a coalition to unseat the divisive Netanyahu, and Prime Minister Naftali Bennett have kept many of the former government s international priorities — including a pressure drive on Iran, whose nuclear program has been hindered by a slew of sabotage attacks widely blamed on Israel.

Calling for peaceful solutions, Biden has sought to rejoin a 2015 nuclear accord with Iran that was bitterly opposed by Israel and trashed by Trump, leading Tehran to revive contested nuclear work that it had wound down.

Indirect US-Iran talks made no breakthrough before the election of a new hardline government in Tehran, which has yet to return to the negotiations in Vienna.

In a meeting Tuesday with Biden s national security adviser, Jake Sullivan, Lapid called for “the need for an alternative plan to the nuclear agreement,” according to the Israeli embassy.

“It does seem like there is this mutual recognition, between the US and our partners in the region, foremost among them Israel, that we are much better off tackling this problem together and keeping our disagreements behind closed doors,” said Michael Singh, a senior fellow at the Washington Institute for Near East Policy.