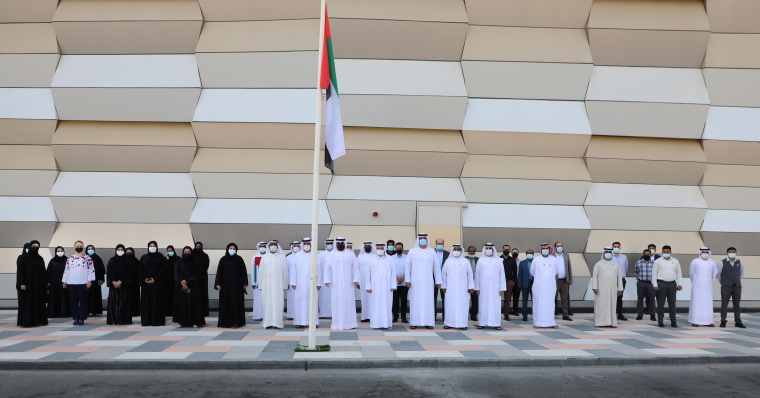 Dubai, UAE: Union Coop, the largest consumer cooperative in the UAE, raised the 40 UAE flags in all its branches, commercial centers and buildings located in strategic areas of the Emirate of Dubai, in celebration of the UAE Flag Day, which is a national occasion and a civilized image of the cohesion of members of society under the flag of the nation, and an expression of belongingness and loyalty to the homeland and to the wise leadership.

H.E. Khalid Humaid Bin Diban Al Falasi, CEO of Union Coop, participated in the Flag raising ceremony at Al Warqa City Mall building, in the presence of Divisions and Dept. Directors and Section Managers from Union Coop and a crowd of employees, taking into account the Covid-19 precautionary measures followed and recommended by the concerned authorities. In Dubai, flags were also raised in front of all the other branches and commercial centers of Union Coop and all its other buildings by the Managers/supervisors of the branches, with the participation of employees, and many of shoppers and the public, who were also able to participate and witness this exceptional event.

Union Coop employees distributed UAE flags to shoppers who visited the branches and commercial centers as an expression of the celebration of this day, intending to include as many community members as possible in this national event.

On this occasion, H.E. Khalid Humaid Bin Diban Al Falasi, extended his warmest congratulations on this national occasion to H.H. Sheikh Khalifa bin Zayed Al Nahyan– the President of the UAE, may God protect him, and his brothers, H.H. Sheikh Mohammed bin Rashid Al Maktoum– the Vice President and Prime Minister of the UAE, and ruler of Dubai and H.H. Sheikh Mohamed bin Zayed Al Nahyan– Crown Prince of Abu Dhabi and Deputy Supreme Commander of the UAE Armed Forces, and their brothers, Their Highnesses, members of the Supreme Council, rulers of the Emirates, and to all residents of the country, both Emiratis and residents, wishing that this occasion would bring back more of Prosperity and achievement at the domestic and international levels.

He stressed that this occasion has become an annual event awaited by everyone in Union Coop to express their love and appreciation for the wise leadership and the dear homeland, pointing out that the celebration of all institutions in the country simultaneously by raising the flag embodies the feeling of belongingness and loyalty to the homeland and the celebration of great achievements of the people of the UAE under the wise leadership.