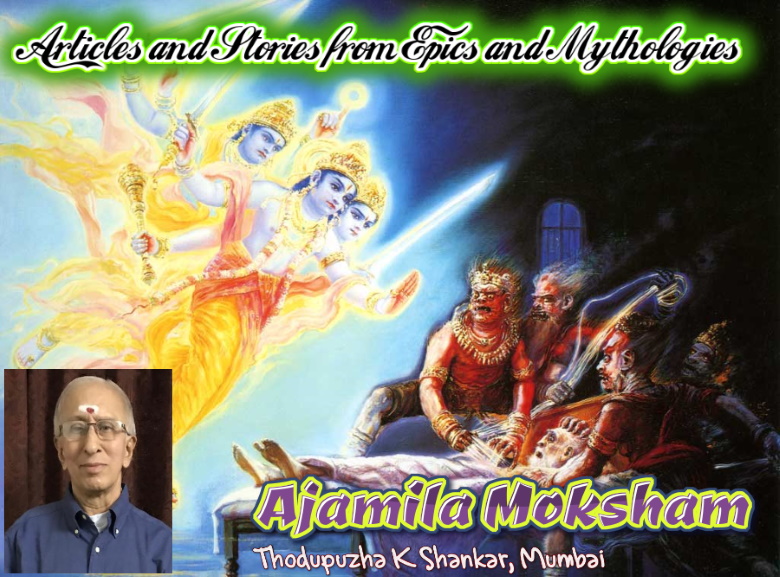 SUKACHARYA, the son of VYASA RISHI, was giving the lessons of SrimadBhagavatham to king Pareekshith, the son of Abhimaneu and Uthara and grandson of Arjuna, who was cursed by a young rishi, by name Shrungi, the son of Sameeka rishi, for putting a dead snake impulsively on his father (Sameeka), while he was on his usual deep meditation. Pareekshith after a long tiresome hunting in the forest, was so thirsty and wanted some water to quench his thirst. As he was meditating, he didn’t pay any heed to his request and hence got angry and committed such a heinous sin. The boy’s curse was that the highly venomous snake Thakshaka would bite him on the seventh day from then and he would die and hence king Pareekshith wanted to get some spiritual education, Preparatory to attaining salvation. Sukacharya (son of Vyasa Bhagavan) was, therefore, explaining SrimadBhagavatham to equip the already penitent Pareekshith to muster up more courage to face the impending death. Sukacharya used to explain it and Pareekshith, ignoring even his food, sleep and rest listened to him day and night with absolute involvement. He asked many a question, which the Acharya explained so well and cleared all his doubts then and there. Within seven days Pareekshith got rid of his fear of death and was perfect in the subject. He became very confident and courageous to face the eventuality.

In this context, Sukacharya quoted and explained to Pareekshith many stories from SrimadBhagavatham. One of the stories was about AJAMILAN, a disciplined Brahmin and a dedicated Vishnu Bhakta, who lived in a place called KANYAKUBJA, with his virtuous wedded wife. She was also equally devout and dedicated and they lived as exemplary made for each other couple there. Every day, Ajamilan used to collect good flowers for the Lord and do his rituals and daily routine deeds so piously and attentively without any external distractions.

One day, Ajamilan, went to a nearby forest to collect certain things, essential for the daily rituals. He went a little deep into the forest searching for the requisite fresh materials. As he was moving forward, he found a young woman as much beautiful as a nymph whose seductive features and body language were so enticing that his inner compulsion tempted him to go nearby and ask her who she was, whether she was a celestial woman or a fairy. She replied so casually, while walking ahead that she was staying alone in a nearby house and Ajamilan too followed her listening unconsciously out of temptation. Then he went close to her without any hesitation or forethought about his ethical life or virtuous wife and passionately embraced her whose electrifying warmth totally upset and mesmerised his whole intellectual domain. Then he asked her whether she would be happy if he married her and she replied in the positive if he stayed with her for life as she was all alone in her house.

Actually, she was an immoral woman and not knowing anything about her moral background, the infatuated AJAMILAN then readily agreed to her condition and started living with her totally forgetting his wedded wife or his own pristine Brahminic responsibilities or ethical values. He resorted to all unethical practices like killing animals, fishing, trapping birds for flesh, looting the wayfarers, theft in the nearby villages etc to cook favourites dishes for his wife who remained idle at home. He ignored his daily bath and body cleanliness as well as his usual rituals and spiritual duties in the wake of his new life. He fathered four children and the fourth son was named Narayanan. He loved the fourth son very much and to keep his wife and children happy and contented always, he intensified his notorious activities. Thus, he led 88 years in the most sinful and unethical way. He saw the shadow of death hovering above his head while lying on the deathbed at the old age.

He could see three demon- looking subordinates of Lord Yama with ropes and sticks in hands to tie and take him to the hell for his sinful acts. When the subordinates advanced towards his bed to cast the rope around his body, the frightened Ajamilan already shivering with fright cried out loudly calling for his fourth son, NARAYANA…. Come and save me!

Wow! The Lord, who always reaches out to any afflicted devotee who calls Him for urgent help, on hearing the call, He sent His dwarapalakas or guards to attend to Ajamilan instantly. On reaching the spot, they consoled Ajamilan and told him The Lord had sent them to save him from this predicament. They told Yama’s assistants to spare Ajamilan and return as the Lord had pardoned him for the sins committed, the very moment he pronounced the word NARAYANA!

When they returned and narrated to Lord Yama the whole episode, He gave strict instruction to the guards to spare whosoever pronounced Lord Vishnu’s name, recited or chanted His hymns or praises!

And when the right time arrived, The VISHNU DUTHAS came and AJAMILAN got into the vehicle brought by them and he could enter the glorious VAIKUNTA LOKA, the heaven or THE ETERNAL ABODE!

-It shows how fast temptations for sensual pleasures can demoralise even a highly disciplined person, if he has no control over his senses and he can relapse into such a miserable plight.

-This shows the glory of VISHNU NAMA or NAMA MAHIMA is indescribable!  God always comes to our rescue when we are in real distress and we recite His name NARAYANA!

Like this SREE SUKA finished the story of AJAMILAN and at the instance of PAREEKSHITH, he proceeded to the next topic on brahma rishi NARADA!