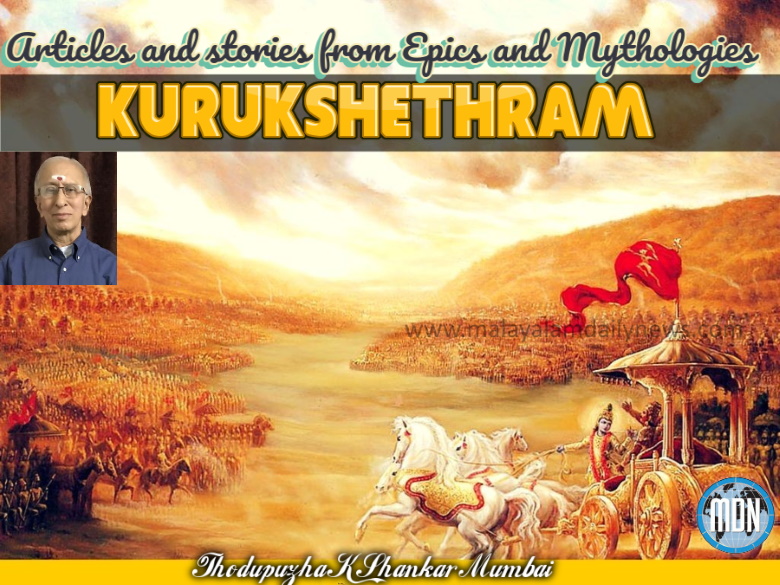 Now, we are going to deal with the topic of KURUKSHETRAM, where the historic Kurukshetra Yudham or the famous Mahabharathayudham(THE GREAT BATTLE OF  KURUKSHETHRA) was fought between KAURAVAS and PANDAVAS after the year 400 B C. The fierce battle lasted 18days which witnessed the tragic death of many veteran heroes, Acharyas and warriors like Dronacharya, Krupacharya, Bhishma, Abhimaneu, Karna and so on. Finally, the Pandavas won the battle, of course, with the full divine support of Lord KRISHNA as the charioteer for Arjun, the well- known archer and established Dharma. The Kauravas were vanquished and totally wiped out except Dhrutharashtra and Gandhari, the parents of Kauravas who had to stay with the Pandavas ultimately.

THE STORY BEHIND KURUKSHETRA:

Once upon a time, a MAHARSHI by name KURU, did his penance (THAPAS) in this place which later on became a holy place called KURUKSHETHRA. Though KURU was the great grandfather for Dhrutharashtra and Pandu commonly, only Dhrutharashtras’s children inherited the family name KAURAVAS.

Some of the most enterprising and enthusiastic ARYANS established the present well-known kingdom in the land between the holy GANGA and YAMUNA which is close to Delhi and named it KURU RAJYAM, the erstwhile, ARYAVARTHAM.

As we saw, Kurukshetra, the place where the violent and hostile battle between KAURAVAS and PANDAVAS was fought, has an interesting legend behind it. Now let us take a U turn and go back to the 6th incarnation of Maha Vishnu, by name Parasurama whose parents were RISHI JAMADAGNI and RENUKA. Parasurama was the fifth son born to them. The five sons were-Rumanvan, Susheshanan, Vasu, Viswavasu and Parasurama in order.  One day, Renuka went with a potto a nearby pond to bring water for the AGNIHOTHRAM and on reaching the spot, she saw a celestial musician-GANDHARVA- was taking bath in the pond and therefore waited for him to come out, but as he didn’t come out, she returned without water. Jamadagni, on seeing this, could sense the reason with his yogic power and got very much infuriated. He asked his sons one by one to kill her, but, no one did it except Parasurama who obeyed his father’s instruction and killed his mother instantly. The first four sons were cursed and converted into stones for disobedience and he asked Parasurama what boon he wanted in return for his obedient action.  Parasurama aptly replied him that he wanted his mother back which Jamadagni fulfilled immediately.

By propitiating Dathathreya Rishi, with his blessings, Karthaveeryarjuna had got thousand hands, all prosperities, long life, invincible power and eternal youth as a boon together with a warning that he would die with Maha Vishnu’s hands eventually.

One day, Karthaveeryarjuna, the king of HEHEYA RAJYA, visited Jamadagni’sAsram and he was accorded a cordial and suitable welcome. While returning, he happened to see SUSHILA, the sister of KAMADHENU, the All-giving celestial cow and desired for it, but Jamagagni declined to give it. In a fit of anger and rage, his minister Chandragupta, destroyed many useful trees there and went away.  Later, the minister and his accomplices killed Jamadagni and stole away the cow on the logic that such a virtuous cow should live in the palace and not in the hermitage. Parasurama was not there at that time. When he returned, he learned everything from his mother and was very much annoyed. He took all his weapons, took Lord Shiva’s blessings and left for Karthaveeryarjuna’s palace. There he challenged him, grounded him and standing on his chest, chopped away all his thousand hands one by one with his divine axe and killed him. Thus, the prediction made by Dathathreya Rishi proved true and he died with the Lord’s hands. His soul, the inner effulgence, identified with the Supreme Soul and he attained salvation!

Pasurama was very much moved by the tears of his widowed mother RENUKA, particularly at the sight of the sad demise of his father and massacred the whole Kshathriyas in a spirit of retaliation. Renuka also died at the sight of her husband’s dead body.  It is believed that he vowed to his departed parents that he would go round the world twenty- one times and destroy all Kshathriyas all over the world and executed it. It is believed that he poured the collected blood of the Kshatriyas he murdered in revenge into five pools and also did rituals with the blood to gratify his lost parents. It is also believed that by virtue of his parents’ blessings, all the five pools became five renowned holy pools by name “SAMANTHA PANCHAKAM”! These five holy pools are believed to be in the Kurukshetra land. SAMANTHA PANCHAKAM is the same KURUKSHETRA where the historic BATTLE OF MAHABHARATHA was fought between the KAURAVAS and PANDAVAS!

But he was feeling so penitent about his action and therefore, wanted to donate the entire land to others for some good purpose as an expiation or atonement (prayaschitham). Though he gifted the entire kurukshetra land to KASHYAPA Rishi who was searching for some land for his hermitage, he hesitated to accept it as it was a sinned land and also equally reluctant to reject for fear of his curse or loss of own life by him. Nevertheless, he went there and was totally surprised at a unique sight. A male and a female cobra were living in a burrow there. Another male cobra came there to romance with it when the male cobra was away, but the female cobra objected and told it,

“See, I am already married and my husband is away. So, don’t disturb us, our peaceful life, but you just quit immediately”. Still the other cobra wanted to get into a wrongful relationship. Then the female cobra angrily charged at him and he died instantly due to her chastity.

When KASHYAPA Rishi saw or rather eye -witnessed this phenomenal incident, he was surprised or flabbergasted and got convinced that there was no harm in accepting this land where even snakes had a code of conduct and observed the law of chastity or PATHIVRUTHYAM. Thus, he accepted the land for making his hermitage and practising penance and daily meditation there. Now, let us go back to see what happened after Parasurama donated his land to Kshyapa Rishi.

After giving away the land of Kurukshethra to Kashyapa Rishi, there was no land left for Parasurama to sit and do his daily prayers and meditations. Consequently, he threw his axe into the Arabian Sea to reclaim some portion of land for his purpose. The sea gave in and a vast track of vacant land emerged. This reclaimed land gradually became KERALAM, the land of coconut trees. Subsequently, more and more brahmins, different communities and others who were occupied in various socially indispensable professions like carpentry, masonry, washing, sculpturing etc from the neighbouring Tamil Nadu also migrated to the present KERALA. The place is now inhabited by people belonging to different faiths and has become a total secular state.

Parasurama, a disciple of Lord Shiva, and an astute Brahmachari is one of the SAPTHA CHIRANJIVIS!

Because Parasurama reclaimed the land from the Arabian sea, KERALA is also called PARASURAMA KSETHRAM or BHARGGAVA KSHETRAM. Moreover, it is also believed that it was initially called Cheralam as it was part of Chera Rajya, which gradually became Keralam. Besides, there are also many other places of worship belonging to all religions in KERALA.

Moral: Even snakes observed chastity or CHARITHRYAM in an epoch!