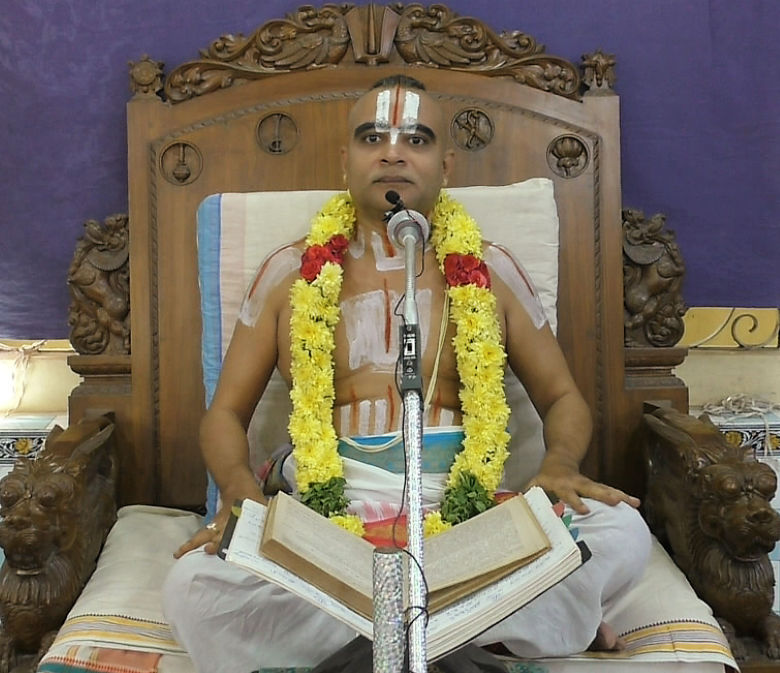 It is believed that of all the yugas, the ongoing KALIYUGA is considered the most conducive yuga for practicing, promoting and propagating BHAKTHI JNANA AND VAIRAGYA, which yield the quickest result over the others. Today, we have not only the treasures of Puranic and mythological works of the eminent rishis and poets like Valmeeki, Vyasa and Kalidasa, but also number of learned Acharyas and spiritual gurus, besides a host of experienced Swamijisall over who are incessantly engaged in spreading this basic awareness among all with particular reference to the younger generation.

Particularly everywhere the temples are doing a laudable service by organizing SAPTAHAMS or SENNIGHTS, NAVAHAMS as well as chanting of SRI NARAYANEEYAM and SRIMAD BHAGAVAD GITA under the able guidance of well- trained teachers. The enthusiastic devotees flock to the venues even from far-flung areas. The organizers in these days make necessary arrangements also for providing breakfast, lunch, coffee, tea, water etc.to the participants during the period of the event.

Mumbai, being the cosmopolitan city, there is no dearth of devotees who have migrated from other states and settled here, the inflow of veritable devotees to the center like ants around a honey drop is very high and a well crowded audience gives tremendous impetus to the ACHARYAS. Eminent Acharyas like renowned BrahmashriKrishaPremi(alisSri Anna), his sons Sri Dr Rangan, and Sri Hari, U VeVelukkudi Krishnan Swami, Sri. Aravindalochanan Swami his well-groomed disciple; Sri. Dushyant Sridhar;BrahmashriNochurVenkataraman ;Brahmashri Erode Balaji;Udit Chaitanya and BrahmashriMuralikrishnan Namboothiri;  to mention a few of them.Theireloquent Pravachans or spiritual orations attract huge crowds every time.

Now, though this writer has heard all of them many times on various occasions in the temples in Mumbai, the latest spiritual oration  heard was of Shri Then Thiruperai K. Arvindalochananswamy who delivered the daily Upannyasamduring the 60thSrimadBhagavathaSapthaham(SENNIGHTS)conducted by KRISHNAPRIYA at the Bhajan Samaj Temple Premises in Garodia Nagar in MAY-2022.

Just as a good tree comes from a good seed, a seasoned Guru also comes from a dedicated disciple focused on his spiritual perfection over the years which requires lots of patience and perseverance. Such a disciple only can blossom into a much sought-after Acharya who in turn grooms the Sadhakas into worthy disciples with a purpose.

SRI ARAVINDALOCHANANSWAMY, the well-known, well-groomed dedicated disciple of renowned Acharya Shri U Ve. Velukudi Krishnan swami also possesses all such unique sterling qualities. In persona, appearance, conversational/oratorial and recitational style, wisdom, in-depthknowledge, lifestyle, tone, everything tallies par excellence. Now let us peep into his academic excellence, spiritual journey and how he traversed with lots of endurance, sacrifices, difficulties encountered with dedication and determination. The Guru also feels contented with the progress of the disciple who follows in his footsteps and that contentment of the Guru is the most befitting GURUDAKSHINA (offering).

SHRI ARAVINDALOCHANANSWAMY aged 37 years was born into an IYANGAR family, as the son of Shri Kannan and Smt. Sivaramangai .His siblings – 2 sisters are Ms. Vagula and Ms. Janaki.As regards academic qualification, he is an Electronics Engineer and had worked and later relinquished a senior position in a MNC in 2008 to pursue the spiritual path.

The details of his Acharya and Gurus are as given below:

As regards his proficiency in Vedas, Epics and mythologies, he has by virtue of his instinct and quick grasping power supported by a good memory power, enthusiasm and profound passion for acquiring spiritual erudition, he has gained commendable mastery in SrimadRamayanam, SrimadBhagavatham, Bhagavad Gita, Upanishads, Vishnu Puranam, Vishnu-sahasranamam as well as Alwar’s 4000 DivyaPrabandhamwhich contains Andal Thirupavai and in general all Vaishnavaite scripts.

As a good professional religious orator,SriAravindalochananswamy has an admirable command over Tamil, English, Sanskrit and Hindi which always helps him to deliver impressive discourses on any subject, be SrimadRamayanam or SrimadBhagavatham or any other subject before an audience. Everything depends upon the Guru’s blessings and God’s grace to get the continuous flow of events and names in a sequence. Very few people have got the blessing of everything at the tip of their tongue and fingertip. Only true disciples who have got the Guru’s blessings,will have such a rare gift.

Title Awarded to him:  ANMEGAKKONDAL

HIS PLACES OF DISCOURSE:

As a seasoned religious speaker, his spiritual discourses normally take place in various temples and religious centers and the usual places are:-

Close on the heel was another educative discourse on-

RAMANUJA AS A MODERNIZER -HIS SOCIAL REFORMS AND TEMPLE ADMINISTRATION, in MELBOURNE, AUSTRALIA, held on 26th October 2017.

These two discourses show that his fame is growing to the global arena and also that the south Indian diaspora in other countries also perpetuate their spiritual aptitude sans any wear and tear even in the midst of western civilization.

Besides, he is conducting classes on Srimad Bhagavad Gita in Chennai and Guruparampara in Pondichery regularly. Though he is usually busy with spiritual activities as narrated above, he has released more than 40 MP3 CDs on various subjects which contain his discourses of 800 hours delivered in temples or other spiritual centers on different occasions. Apart from this, he has made Tirupavaidiscourse for medias like: –

DivyadesaVaibhavam in S V B C Channel in 2014

SrimadBhagavatha Puranam in Jaya T V from June 2016 and it is still going on without any break every day.

In the midst of all these busy activities, he is rendering services to:

He is settled in Triplicane with his spouse Sriranganayaki and two daughters by name Sukamika 14years and Sunethra 7 years.For more details about his spiritual journey and discourses and various related detailsup to date, it will be apt to visit his website given below as there are innumerable things to view and understand, all of which, except a few photographs, can’t be narrated here at a     stretch:

His series of discourses on various topics are available in You Tube also in his name.

His email id is :- thenthiruperaiaravindalochanan@gmail.com

Well, we have been seeing the trajectory of Sri Aravindalochananswamy’s interesting and inspiring systematic spiritual progress. At the age of 37, he is standing like a colossus with tremendous achievements and still persevering to achieve more in the spiritual realm. It is said that if we put one step forward towards God, God will put ten steps towards us. One who goesto him will certainly return with lot of knowledge about all epics and mythologies, besides basic things needed in our daily life. His discourses are very clear,audible and impressive with his detailed explanations, wherever necessary. He has complete grasp of everything coupled with convincing power patience and humility. He is very social with the devotees and interacts with everyone who seeks his guidance and enlightenment.

An ideal Acharrya/Guru who helps the seeker to grow with him. What isneeded more in this Yuga is spiritual fervor for an individualto attain moksha, the ultimate desirable destination for every human being.Let us therefore, give more importance to spiritual knowledge potential, which alone can sustain us in our journey on earth. Spiritual Gurus like Sri Arvindalochanan swamy can help the seeker to achieve the goal of Moksha, the fourth and final, among the value-rich PURUSHARTHAS!

Now let us wish SHRI THENTHIRUPERAI ARAVINDALOCHANAN SWAMY, THE DISCIPLE PAREXCELLENCE, all the best in his poised spiritual journey and his worthy namegrows in larger dimension and humanity be benefitted everywhere and bring glory to our country. Let us also wish him All the Best for a long, happy and peaceful life! 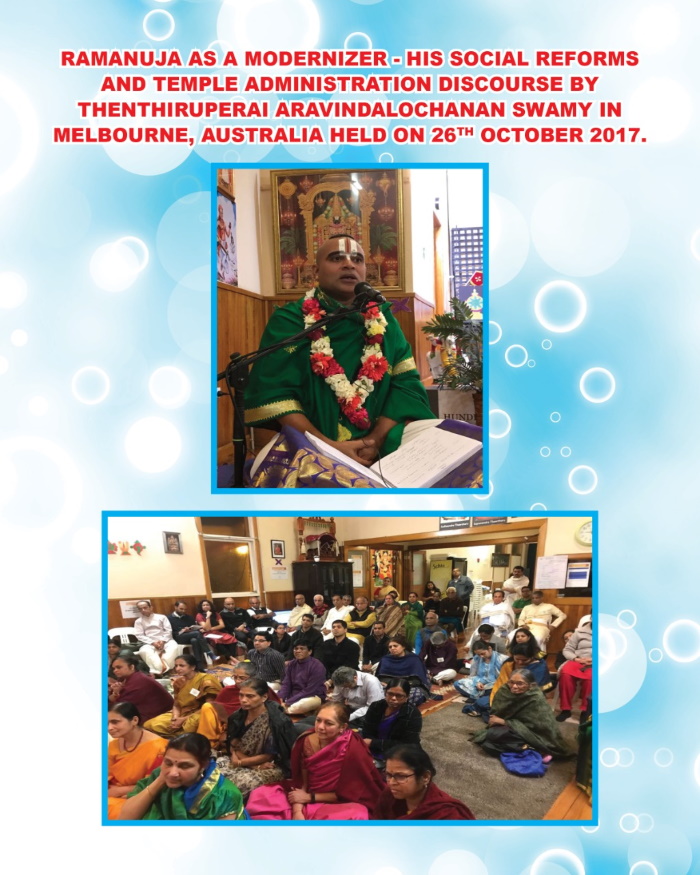 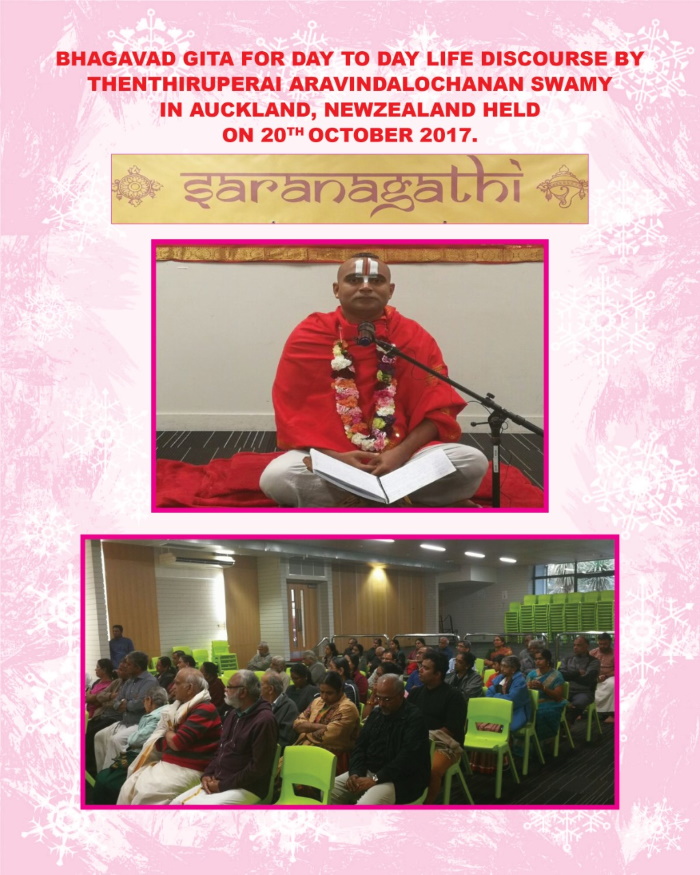