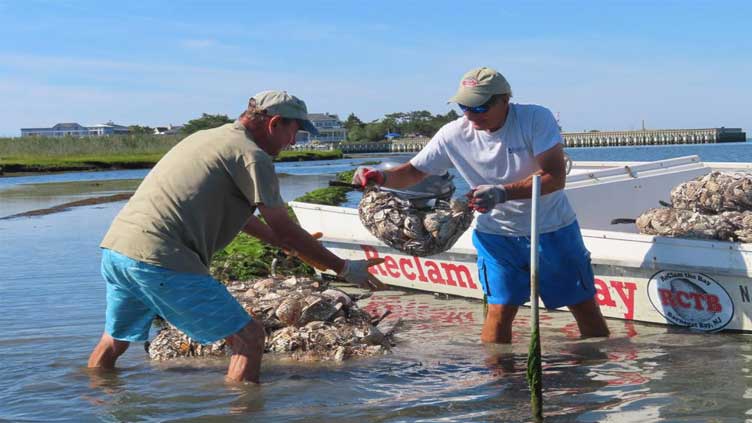 LACEY TOWNSHIP, N.J.  — Denise Vaccaro bought her home on the Jersey Shore over 20 years ago, charmed by the little beach at the end of a sandy spit on Barnegat Bay where she could sit and read while listening to the waves and enjoying the cool breezes.

That home was destroyed 10 years ago in Superstorm Sandy, and the beach she loved is also gone, claimed by rising seas that are eroding the shoreline and pushing water to porches.

“It’s so sad that this little community has lost its beach,” Vaccaro said. “People are losing their property. My home was totally destroyed. It’s a way of life that’s being lost.”
It’s a story being played out on shorelines all around the world as once idyllic beach communities are washing away, and residents are struggling to adapt.

But a partial solution being tried around the world is also being done here: establishing oyster colonies to form natural barriers that blunt the force of waves and help stabilize eroding shorelines.

Such a project is underway near Vaccaro’s rebuilt house, carried out by the American Littoral Society, which received a $1 million grant from the New Jersey Department of Environmental Protection. The group has been building steel wire cages, filling them with rocks and whelk shells and positioning them in rows along the shoreline of Barnegat Bay.

Tiny baby oysters, called spat, are attached to whelk shells and placed in the bay near the existing cages to further stabilize the shoreline.

The shoreline in Vaccaro’s neighborhood has lost 150 feet (46 meters) of beach since 1995, according to the Littoral Society.

In much of it, there is no sand at all; waves pound against grassy mounds that are getting smaller all the time. A shuffleboard court that used to be part of a wide beach with plenty of sand between it and the bay is now halfway submerged in water.

“Some of the people along this shoreline have seen the bay swallow their back porches, more than one,” said Julie Schumacher, habitat restoration coordinator for the Littoral Society. “The water is right up against them.”

The rows of oysters appear to be doing their job as effective breakwaters. One recent day, a strong east wind rippled the bay with whitecaps out beyond the oysters. But between the oysters and the shoreline, the water was much calmer, and waves sloped gently onto the shoreline instead of pounding against it.

As an added benefit, the oysters help improve water quality in the bay: A single oyster can filter up to 50 gallons (190 liters) of water a day.

Projects like this one are an important part of New Jersey’s coastal resilience program — using plants and shellfish beds to create “living shorelines” that complement engineered structures like sea walls and bulkheads to protect homes and people.

A few miles south, a group called ReClam the Bay is building an oyster reef to protect the shoreline of Mordecai Island, an uninhabited patch of land that in turn protects the shoreline of Beach Haven, a popular resort town on Long Beach Island.

Volunteers fill mesh bags with 35 pounds (16 kilograms) of whelk shells, to which millions of baby oysters have been attached, then sail them out to the reef a few hundred yards offshore. They’ve placed 10,000 bags of oysters and whelk shells there since 2015.

“In the last 100 years, Mordecai Island has lost 35% of its size,” said Jack Duggan, a longtime volunteer with the group. “If we do nothing, in 40 years the island will be gone — just washed over. This island protects Beach Haven from taking the force of all that wave action.”

ReClam The Bay has done a similar project establishing an oyster reef in front of a brick wall in Tuckerton, further north in the bay, and the Littoral Society has numerous other oyster projects underway. At the Naval Weapons Station Earle in Middletown, the NY/NJ Baykeeper organization is growing oysters along the heavily guarded pier and deploying them along the shoreline to protect the coast, which suffered serious erosion during Sandy.

Governments and volunteers in other places are doing the same thing.

The Oyster Recovery Partnership in Maryland has placed billions of oysters on shells in Chesapeake Bay in a project set to run through 2025. In Florida, volunteers and researchers established oyster colonies along portions of the Peace River in Punta Gorda.

In Argyll, Scotland, a group called Seawilding began restoring an area in 2020 near a coastal inlet that had become degraded. They’ve restored more than 300,000 oysters there. Also in Scotland, a project aims to restore 30,000 oysters near Edinburgh.

Vaccaro realizes her New Jersey home may well depend on the success of a bunch of tiny oysters.
“If we don’t do anything, we’re not going to have any of these houses,” Vaccaro said. “In 20 years my house — which I rebuilt on pilings — could be gone again. This is why what we’re doing here is so important to me. I saw what happened and I see what can happen again.”