Indian overseas Congress, USA strongly condemns the destruction of Gandhi statue and attack on the house of worship in New York.

“Vandalizing and toppling of the statue of an icon of non-violence and apostle of peace world over is beyond comprehension and simply disgraceful,” said George Abraham, Vice-chairman of the Indian Overseas Congress, USA. “This attack appears to be no more an isolated incident but rather a concentrated effort to tarnish his reputation and rewrite history. I urge the civilized world to condemn this cowardly action and appeal to the law enforcement agencies to investigate the series of such incidents in the U.S. and whether it is an organized and agenda-driven criminal activity. 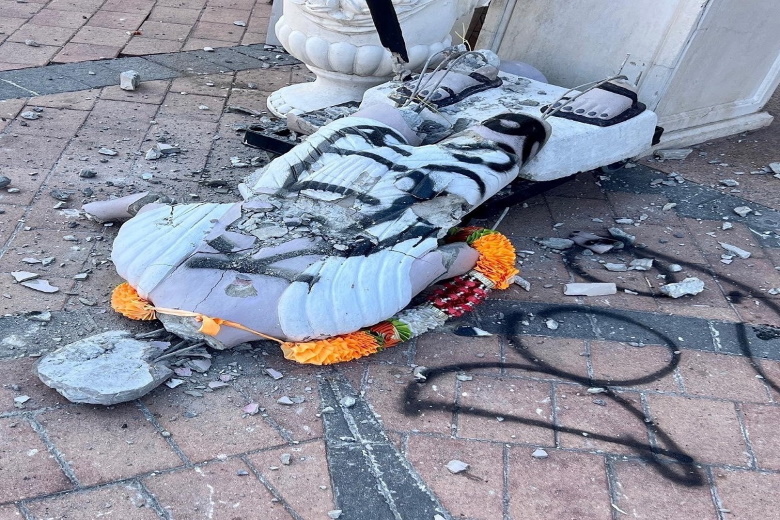 This is the second attack this month; an attack has taken place at the Sri Tulsi Mandir at Richmond Hill, New Yorkon August 3 and the statue was knocked over, according to the Queens Daily Eagle. It has been reported that six men destroyed the statue with a sledgehammer and painted hate-filled words around it and on the road.

Gandhi’s identity is an integral part of India’s independence movement, while his philosophy of non-violence has inspired great leaders like Nelson Mandela and Martin Luther King. But Nathuram Godse, the man who assassinated Gandhi – has come to be celebrated by some in India as a true patriot. Some other groups are making an effort to paint Gandhi’s views on caste and race in a negative light asking for the removal of statues “as a small step” towards addressing racism and past discrimination.

“Dishonoring the heroes of the past and dismantling their statues are the wrong way to undo history or seek remedy for the past grievances and the miscreants behind this heinous act should be caught and punished to the extent of the law for spreading their hatred and bigotry in a great city like New York, and Indian Overseas Congress, USA strongly condemns the destruction of Gandhi statue and attack on the house of worship.”  Mr. Abraham added.