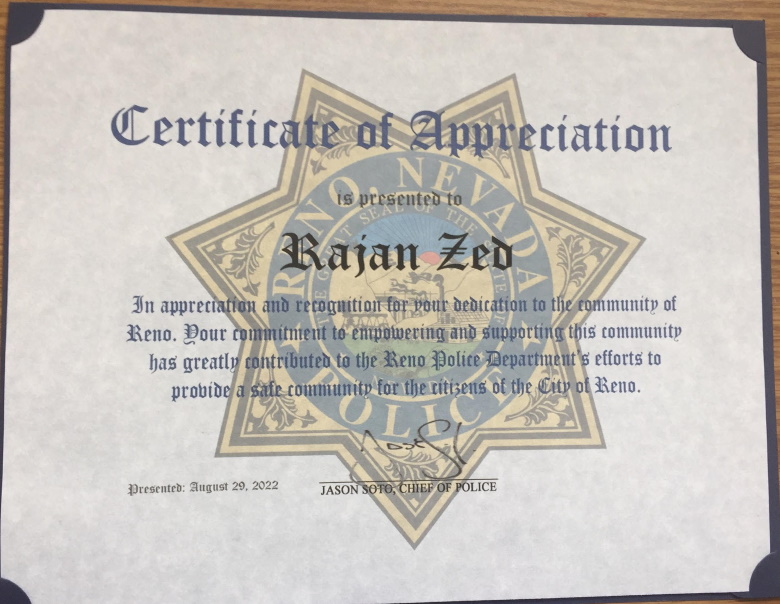 Distinguished religious statesman Rajan Zed was presented with a Certificate of Appreciation by Reno Police Department in recognition for his “dedication to the community”.

This Certificate of Recognition, signed by Jason Soto, Chief of Reno Police, was given to Zed by Reno Police Deputy Chief Zachary Thew in a public ceremony held in the briefing room of Reno Police Headquarters.

It stated: Certificate of Appreciation is presented to Rajan Zed in appreciation and recognition for your dedication to the community of Reno. Your commitment to empowering and supporting this community has greatly contributed to the Reno Police Department’s efforts to provide a safe community for the citizens of the City of Reno.

Global religious statesman Rajan Zed has taken-up interfaith, religion, European Roma (Gypsies), and other causes all over the world. He has read opening prayers in the United States Senate and US House-of-Representatives in Washington DC; various State Senates, State Houses-of-Representatives, County Commissions, City Councils all-over USA; covering 292 legislative bodies in 43 states. He was invited by the President of the European Parliament in Brussels (Belgium) for a one-on-one meeting to promote interfaith dialogue.

Zed, who is President of Universal Society of Hinduism, had been panelist for “On Faith”, a prestigious interactive conversation on religion produced by The Washington Post; and has been producing weekly interfaith panel “Faith Forum” in a Gannett daily for over 11 years.

Tagline of Reno Police Department is “Your Police, Our Community”. According to the Department’s website: Recipient of the Patrick Henry Award, Chief Soto has a strong belief in community; and during his tenure as Chief of Police, he has been a leader in innovation and intelligence-led policing.